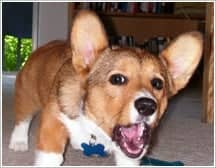 Beginning this Friday, Perrspectives is introducing a new feature, Barking Mad. While others offer Friday cat blogging (for example, here and here), Barking Mad combines a quick survey of the outrages of the week with photos of my ill-tempered Corgi, Zoe.
These are just some of the people and issues that, well, pissed me off this week:
Ersatz Republican Rebels. After NBC hyped the group of supposed GOP moderates who took President Bush to the woodshed on Iraq on Tuesday, all 11 voted with the President on the House funding bill on Thursday. And as it turns out, they are the ones who apparently got the dressing down from Karl Rove and his henchmen. For more on the endangered species known as the yellow-bellied moderate Republican, see Specter, Arlen.
Condoleezza Rice. While her lone contribution to posterity will be her jaw-dropping response to the 9/11 Commission ("I believe it was titled 'Bin Laden Determined to Attack Inside in the United States"), The Atlantic and Foreign Policy offered glowing new hagiographies of our failed Secretary of State.
Alberto Gonzales. This week, the Attorney General continued to do what comes naturally - play dumb. His repertoire of Sgt. Schultz meets the Rain Man offers the Bush administration the perfect cover for its attempt to convert the ranks of the U.S. attorneys into a partisan appendage of the GOP. While all eyes focus on an Attorney General on life support, the real story of the Permanent Republican Majority Project fades into the distance.
Mitt Romney. Despite his signature opportunism, rhetorical missteps and flip-flopping on abortion, Osama Bin Laden and even his state of residence, Time, the New York Times and others still believe he has the veneer of gravitas.
Rudy Giuliani. Rivaling Romney on his abortion gymnastics, the former New York mayor continues to reap millions in speaking and consulting fees, including greasing palms at the DEA for the company behind the OxyContin fraud.
Conservative Peddlers of the Protocols of the Elders of Zion. This week, CNN host and ratings cellar-dweller Glenn Beck explained why he would not vote for a Jew for President. And former House Majority Leader Tom Delay declared that only the radical American left compares the United States to Nazi Germany, just weeks after he equated liberals to Adolf Hitler.
For more photos of Zoe the Corgi and her cross-country road trip adventures, see "One State, Two State, Red State, Blue State."