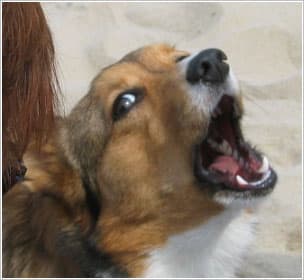 The past week produced another torrent of conservative outrages. The revelations of Alberto Gonzales' hospital visit to browbeat John Ashcroft, the celebration of the late Jerry Falwell, and the implosion of Paul Wolfowitz at the World Bank were just some of the developments that made me barking mad.
Alberto Gonzales continued to dissemble over the U.S. attorneys purge and President Bush's illegal NSA domestic surveillance program. On Tuesday, Gonzales blamed his outgoing deputy AG Paul McNulty for having "most of the operational authority and decisions" in the prosecutor sacking, just one month after testifying to the Senate on April 19 that "I think I would have had the deputy attorney general more involved, directly involved." The testimony of former deputy attorney general Paul Comey revealed then-White House Counsel Alberto Gonzales as a lawbreaker who later lied to Congress about the extent of NSA domestic spying. It's bad enough this is the second time that Gonzales was shown to have lied to Congress under oath. Even worse, he made a gravely ill John Ashcroft appear heroic.
Down in South Carolina, the field of GOP hopefuls showed once again why Republican primary voters continue to pray for the reanimation of Ronald Reagan. John McCain zinged Mitt Romney for changing his beliefs in even number years. Meanwhile, the Republican White House wannabes bloodlust for torture was again on display, with Romney claiming he would "double Guantanamo" while Rudy Giuliani endorsed "every method they can think of" by detainee interrogators. Sadly for the once-and-future pro-choice Giuliani, Focus on the Family's James Dobson joined the dear departed Reverend Jerry Falwell in voicing his opposition to Rudy's candidacy.
Meanwhile, the long national nightmare that is Paul Wolfowitz will soon be over. After endless expressions of "full confidence" in the Iraq war architect turned World Bank chief, President Bush pulled the rug out from under Wolfowitz and cleared the way for his overdue resignation. Amazingly, the cat dissecting, insider trading, Terri Schiavo misdiagnosing Bill Frist is apparently one of the names on the short list of possible successors.
British Prime Minister Tony Blair also experienced the reverse Midas touch of George W. Bush during his farewell visit to Washington this week. Blair, whose legacy of "third way" reform in the U.K. was forever tainted by his submission to Bush's Iraq war, watched as President Bush admit he "could be" responsible for the demise of Blair's premiership. And while Bush offered his final embarrassment in DC, back in London a British think tank study proclaimed Blair's Iraq legacy a "failed state."
Speaking of career-ending events, the death of American Taliban leader Jerry Falwell produced the predictable rhetorical convulsions across the political spectrum. John McCain, who in 2000 deemed Falwell an "agent of intolerance," led the cavalcade of GOP presidential candidates scrambling to out-praise the founder of the Moral Majority. Predictably, Ann Coulter penned a hagiography that proclaimed Falwell "a perfected Christian." Tell that to Tinky Winky, the anti-Christ "Jewish mayor" and those ("the pagans, and the abortionists, and the feminists, and the gays and the lesbians who are actively trying to make that an alternative lifestyle, the ACLU, People For the American Way") Falwell said helped make 9/11 happen.
For more pictures of Zoe the Corgi and right-wing outrages past, visit the Barking Mad archives.