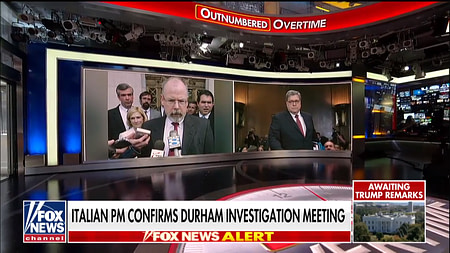 This is the legal landscape now before the man who must be identified as the attorney general of the United States: The unanimous consensus of the American intelligence community, the findings of the Mueller investigation, and the bipartisan conclusion of the Senate Select Committee on Intelligence all agree that the Russian Federation interfered in the 2016 presidential election "by harming Hillary Clinton's chances of success and supporting Donald Trump at the direction of the Kremlin." Special counsel Robert Mueller documented numerous interactions between Russian actors and Trump campaign officials and laid out 10 instances of obstruction of justice committed by President Donald Trump. And now Trump faces impeachment over his illegal solicitation of foreign intervention for his 2020 reelection campaign and his shocking quid pro quo withholding of military aid to Ukraine unless its government publicly promised to investigate groundless allegations against his potential opponent, former Vice President Joe Biden.
In response, William Barr, the man columnist William Safire aptly called the "Cover-up General" almost 30 years ago, is functioning as Donald Trump's consigliere, not as the chief law enforcement officer for the American people. Barr's mission now is to manufacture evidence to paint the very investigations into Trump's lawlessness as illegitimate themselves. The very basis of the Trump-Russia probe, Barr suggested earlier this year, might well be illegal "spying" carried out by the Obama administration against the 2016 Republican nominee. Instead, the globe-trotting Justice Department boss hopes to show, it was Ukrainian skullduggery three years ago that framed Russia and the Trump campaign.
To make his case, Bill Barr isn't merely pressuring American allies such as the U.K., Italy, and Australia to admit to dubious dealings. He's turning the screws on dedicated career public servants in the CIA and the FBI whose only crime was to sound the alarm about Vladimir Putin's heavy hand in the 2016 campaign. And as the The New York Times reported after his trip to Rome in September, Barr is deploying some big names in service of his inquisition.

Everything about Mr. Barr's visit was unusual -- not least his companion and their mission: John H. Durham, a top federal prosecutor whom Mr. Barr has assigned to review the origins of the Russia investigation. They were seeking evidence that might bolster a conspiracy theory long nurtured by President Trump: that some of America's closest allies plotted with his "deep state" enemies in 2016 to try to prevent him from winning the presidency.
[...]
For his review, Mr. Durham has enlisted Nora R. Dannehy, a veteran federal prosecutor who worked with him in Connecticut and led a two-year inquiry into whether department officials under President George W. Bush broke the law in firing several United States attorneys.

If those names sound hauntingly familiar, they should. It was John Durham who was tapped by President George W. Bush's last attorney general, Michael Mukasey, to investigate whether any laws were broken when the CIA's Jose Rodriguez and his then-deputy Gina Haspel ordered the destruction of roughly 100 videotapes of terrorism suspect detainee interrogations. When Barack Obama became president, his attorney general, Eric Holder, expanded the scope of Durham's probe to look into detainee deaths in American custody and whether interrogators had violated U.S. or international law. As for Dannehy, she was selected by Attorney General Mukasey to look into the potential criminality of the Bush White House's purge of U.S. prosecutors.