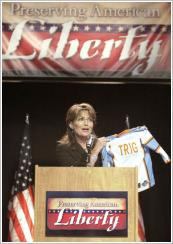 Believing, not knowing. For her fiercest critics and most fervent supporters alike, that is the hallmark of Sarah Palin. And on no issue does Palin's belief trump her knowledge more than energy. After all, the woman John McCain declared "knows more about energy than probably anyone else in the United States of America" literally had no idea how much her own state of Alaska produced. And yet in the midst of the catastrophe now unfolding in the Gulf Coast, the half-term Governor reacted by announcing, "Domestic Drilling, Why We Can Still Believe."
That faith-based response appeared on Facebook just a day after Palin tweeted Gulf Coast residents, "Our prayers r w/u." For her, she insisted, the environmental disaster is personal:

As an Alaskan, I can speak from the heart about the tragedy of an oil spill. For as long as I live, I will never forget the day the Exxon-Valdez ran aground on Bligh Reef and millions of gallons of North Slope crude poured into the waters of our beautiful Prince William Sound...
We also filed a Friend-of-the-Court brief against Exxon's interests for its decades-old responsibility to compensate Alaskans affected by the Valdez spill, and I took other actions "against" the industry which ultimately helped hold it accountable.

Alas, Sarah Palin can speak from the heart but not from the head. During the 2008 campaign, she failed to remember Alaska's Exxon Valdez case when asked by Katie Couric about Supreme Court decisions with which she disagreed.
Before ending her Facebook screed with "our prayers go up for a successful recovery," Palin in typically Palinesque fashion professed her faith in future oil drilling. We should believe, she in essence, because we need to:

All responsible energy development must be accompanied by strict oversight, but even with the strictest oversight in the world, accidents still happen. No human endeavor is ever without risk - whether it's sending a man to the moon or extracting the necessary resources to fuel our civilization. I repeat the slogan "drill here, drill now" not out of naiveté or disregard for the tragic consequences of oil spills - my family and my state and I know firsthand those consequences. How could I still believe in drilling America's domestic supply of energy after having seen the devastation of the Exxon-Valdez spill? I continue to believe in it because increased domestic oil production will make us a more secure, prosperous, and peaceful nation.

And Palin wasn't content to rest there. On Saturday, the Ronald Reagan acolyte told a crowd of Republicans in Independence, Missouri that when it comes to the oil industry, Americans should trust but not verify. She called "the oil spill "very tragic" but added: "I want our country to be able to trust the oil industry." After noting, "We've got to tap domestically because energy security will be the key to our prosperity," Palin delivered a trademark line:

But as the record shows, for Sarah Palin, "thee" often means "me." Whether the issue is energy, Iraq, her political career or just about anything else, America's grace is her own
Her April address to an evangelical group called Women of Joy provides a recent case in point. Palin wasn't content to advocate the demolition of the wall separating church and state ("Lest anyone try to convince you that God should be separated from the state, our Founding Fathers, they were believers"). She announced she was "so appreciative" of the "prayer warriors" battling on her behalf:

"Prayer Warriors all across the country -- and I know some of you are here tonight -- your prayer shield allows me and others to go forth. You give out strength, providing a prayer shield. That is the only way to put one foot in front of the other, and get through some of these days with joy."

And while you're at it, Sarah Palin suggested to the Tea Party Convention in February, you can pray for America, too. Unlike President Obama's repeated warnings to the American people not to assume that "our progress was inevitable -- that America was always destined to succeed," Palin declared that "divine intervention" and not being "unafraid to do what was hard" was the key to the nation's future:

"And then I think kind of tougher to, kind of tougher to put our arms around but, allowing America's spirit to rise again by not being afraid, not being afraid to kind of go back to some of our roots as a God fearing nation where we're not afraid to say, especially in times of potential trouble in the future here, we're not afraid to say, you know, we don't have all the answers as fallible men and women so it would be wise of us to start seeking some divine intervention again in this country, so that we can be safe and secure and prosperous again."

Of course, in Sarah Palin's telling, the Lord is going rogue with her.
As the Washington Post summed it up in its review of book, Palin's worldview is "an Alaskan frontierswoman's trinity" of "God, Todd and dominion over animals." And to be sure, the Quitta from Wasilla sees the hand of God everywhere in her life:

Right away, Palin posits her faith as the pillar of her career, as if her successes have unfolded according to a grand divine plan. Her selection as McCain's running mate was a "natural progression," she writes in one section. "I don't believe in coincidences," she writes in another.

But as it turns out, Sarah Palin doesn't just have the Lord in her corner, she's also His spokesman.
The war in Iraq, as then Governor Palin told students at the School of Ministry at the Wasilla Assembly of God, is "a task that is from God." And when it came to the multibillion natural gas pipeline she hoped would span her state, Palin lectured, "I can do my job there in developing our natural resources...But really all of that stuff doesn't do any good if the people of Alaska's heart isn't right with God," adding:

"God's will has to be done in unifying people and companies to get that gas line built, so pray for that."

When [her son] Trig was born, Palin wrote an e-mail letter to friends and relatives, describing the belated news of her pregnancy and detailing Trig's condition; she wrote the e-mail not in her own name but in God's, and signed it "Trig's Creator, Your Heavenly Father."

Of course, Sarah Palin apparently has long believed she was touched by both the voice - and hand - of God. In May 2005 process complete with a laying on of hands, Kenyan pastor Thomas Muthee prayed over Palin, imploring Jesus to protect her from "the spirit of witchcraft." As Election Day approached last fall, the GOP vice presidential claimed to be unconcerned by her ticket's dismal poll numbers. Victory, she insisted, was in God's hands:

"To me, it motivates us, makes us work that much harder. And it also strengthens my faith, because I'm going to know, at the end of the day, putting this in God's hands, that the right thing for America will be done at the end of the day on Nov. 4. So I'm not discouraged at all."

God, it seems, wanted Barack Obama in the White House.
It is the strength of her beliefs and not the empirical truth of the facts which defines Sarah Palin. For example, Palin ultimately defended her "death panels" fraud, one which Politifact deemed the 2009 Lie of the Year, not as an assertion of fact but as a "metaphor." On health care as in oil drilling and so much else, Palin's beliefs would appear next to the dictionary definition of Stephen Colbert's truthiness, "the truth we want to exist":

"Now I'm sure some of the 'word police', the 'wordinistas' over at Webster's are gonna say, 'Hey, that's not a word'. Well, anybody who knows me knows I'm no fan of dictionaries or reference books. They're elitist. Constantly telling us what is or isn't true. Or what did or didn't happen."

Sarah Palin's progressive detractors will take comfort in what might be deemed Colbert's Law: "reality has a well-known liberal bias." As for Palin's fans, that makes them love her all the more.