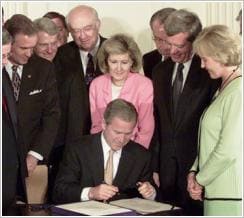 In his Washington Post column Sunday, David Broder provided some insight into the bi-curious political disposition of the Montana Senator Max Baucus. As he contemplated entering politics in the 1970's, Baucus apparently asked veteran New Dealer James Rowe, "Do you think I should run as a Republican or a Democrat?" So it should come as no surprise that thirty years later, the confused Baucus produced a Senate Finance Committee health care bill roundly criticized by both parties. But overlooked in Baucus' efforts to undermine President Obama's health care reform initiative is his vital role eight years earlier in promoting George W. Bush's budget-busting, $1.4 trillion tax cut.
During the battle over the $787 billion stimulus package, President Obama learned to his dismay that bipartisanship is a one-way street. But while Obama like Clinton before him faced virtually total obstructionism from Capitol Hill Republicans, the newly-elected President Bush garnered substantial support from invertebrate Democrats for his massive windfall for the wealthy.
As the New York Times recalled in June 2001, the fence-straddling Max Baucus jumped to Bush's side to back the giveaway:

Following tradition in signing major legislation, Mr. Bush used a different pen for each letter of his name, then handed the pens to Republican Congressional leaders and a few Democrats whose support was critical.
Among them was Senator Max Baucus of Montana, the new chairman of the Finance Committee, whose decision to reach a compromise between his own party's more modest tax cut and Mr. Bush's more ambitious one angered leaders in his own party, including the new majority leader, Senator Tom Daschle of South Dakota. But tonight Mr. Daschle was headed to the White House for a private dinner with Mr. Bush and his wife, Laura, while Mr. Baucus said he did the right thing by striking a deal with Mr. Bush.
''Every day it looks like a better and better decision,'' Mr. Baucus said at the White House after the signing ceremony. ''In many respects, I think politically I helped the party. We Democrats would have been in trouble in 2002 just saying no to every one of the president's proposals.''

As it turned out, not so much. The then-popular wartime President Bush stumped for Republican candidates around the country, helping the GOP gain two seats in the Senate while maintaining its majority in the House. As press secretary Ari Fleischer crowed:

"The president played a very constructive role in making history, historical trends are very hard to break. Not only have we kept the House, but we've gained seats. This is the first time since the Civil War."

Baucus' confusion continued after his party's 2002 midterm disaster. While initially supportive of the second round of Bush tax cuts in 2003, he ultimately balked at the price tag. (Only Zell Miller and Ben Miller betrayed their supposed Democratic colleagues on that colleagues.) Later that year, Baucus voted for the deeply flawed Bush prescription drug plan for Medicare. But in 2005, Max said no to the President's wildly irresponsible scheme to privatize Social Security, announcing that January:

''I seriously doubt I'm going to be the linchpin this time."

If only that was true of today's health care reform process. As became clear this week, Baucus failed completely in threading the needle, crafting a bill most Democrats hate while predictably failing to garner a single Republican supporter. As he unveiled his package alone this week, Baucus lamented, "No Republican has offered his or her support at this moment."
As David Broder rightly (for once) concluded today:

"As usual, Baucus is in the middle. But it is a miserable place to be."