One day before the House Democratic caucus voiced its opposition to President Obama's tax cut deal with Senate Republicans, Speaker Nancy Pelosi focused on the estate tax as adding insult to injury. But Pelosi isn't alone in shining a spotlight on an estate tax proposal that would drain the U.S. Treasury of billions of dollars. As it turns out, that is just one powerful argument for restoring the estate tax at a time of budget deficits and record income inequality. Another, as today's pledge by Facebook CEO Mark Zuckerberg and 56 other billionaires to give away half of their money highlights, is that nothing will undermine charitable giving more than steep reductions in the estate tax.
First a little background. In 2009, only 1 in 500 American estates paid taxes, generating about $25 billion in revenue. But without new legislation in Congress, in 2011 the estate tax rate would jump back up to its pre-2001 (and pre-Bush tax cut) level of 55%, starting at $2 million per couple. In December, the House voted 225-200 to maintain 2009's rate of 45% beginning at $3.5 million per person or $7 million per couple, a proposal endorsed by President Obama. But as 2009 ended, Jon Kyl led the successful GOP effort to block the bill, ensuring the temporary, one-year expiration of the estate tax on January 1st of this year.
And that effort, one which allowed the estates of George Steinbrenner and Texas billionaire Dan Duncan to escape taxes altogether in 2010, Kyl was aided and abetted by Arkansas Democrat Blanche Lincoln. With Kyl, the Senator from Wal-Mart Lincoln sponsored the lower 35% rate and $5 million per person exemption agreed to this week by President Obama. As the Arkansas Times noted:

It's no wonder Speaker Pelosi lamented yesterday, "We believe the estate tax in the bill is a bridge too far" which "ends any kind of symmetry between the two sides."
As for Kyl, lower 35% rate and $5 million per person threshold he and Lincoln jointly proposed was a rest stop on the road to the Republican dream of killing the "death tax" altogether. As he put it in December 2009:

"It's a problem that doesn't have to exist if they'll just leave the existing law alone and let the rate go to zero, which is where everyone wants it to be."

Well, not quite everyone.
On Thursday, Facebook's Zuckerberg joined the list of American billionaires who've made The Giving Pledge. "Why wait," he said, "when there is so much to be done?" Backed by New York City Mayor Michael Bloomberg and Oprah Winfrey among others, Bill Gates and Warren Buffett six months ago called on the super-rich, "starting with the Forbes list of the 400 wealthiest Americans, to pledge -- literally pledge -- at least 50% of their net worth to charity during their lifetimes or at death." Given the $1.2 trillion net worth of that select group, as Fortune noted, over time the Giving Pledge could mean a $600 billion infusion into American charities.
For his part, Warren Buffett has also long insisted that the rich and famous have another moral responsibility. During a press conference four years ago, Buffett offered a strong progressive argument in support of the estate tax:

"I would hate to see the estate tax gutted. It's in keeping with the idea of equality of opportunity in this country, not giving incredible head starts to certain people who were very selective about the womb from which they emerged.
I'm not an enthusiast for dynastic wealth when there are 6 billion people who have much poorer lives. I can't think of anything that's more counter to a democracy that dynastic wealth. The idea that you win the lottery the moment you're born: It just strikes me as outrageous."

America's churches, non-profits, foundations and charities couldn't agree more. As the data make clear, if the Republicans succeed in reducing or eliminating the estate tax outright, U.S. charities will stand to lose billions.
In 2003, the nonpartisan Tax Policy Center documented the hemorrhaging that would ensue. As the TPC described, "The estate tax encourages charitable giving at death by allowing a deduction for charitable bequests" and "also encourages giving during life." Its repeal would be devastating for U.S. charities:

We find that estate tax repeal would reduce charitable bequests by between 22 and 37 percent, or between $3.6 billion and $6 billion per year. Previous studies are consistent with this finding, and also imply that repeal would reduce giving during life by a similar magnitude in dollar terms. To put this in perspective, a reduction in annual charitable donations in life and at death of $10 billion due to estate tax repeal implies that, each year, the nonprofit sector would lose resources equivalent to the total grants currently made by the largest 110 foundations in the United States.1 The qualitative conclusion that repeal would significantly reduce giving holds even if repeal raises aggregate pre-tax wealth and income by plausible amounts. 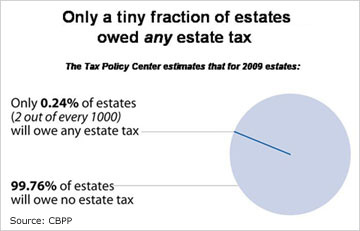 That finding was echoed the next year by the Congressional Budget Office (CBO). Ironically, its director then was Douglas Holtz-Eakin, who later served as the chief economic advisor to Republcian presidential candidate John McCain. (Even more ironic, McCain called for the repeal of the estate tax in 2008, despite two years earlier having proclaimed "most great civilized countries have an income tax and an inheritance tax" and "in my judgment both should be part of our system of federal taxation.") As CBO director Holtz-Eakin wrote in "The Estate Tax and Charitable Giving":

Furthermore, the estate tax provides an incentive to make charitable contributions during life. The paper finds that increasing the amount exempted from the estate tax from $675,000 to either $2 million or $3.5 million would reduce charitable giving by less than 3 percent. However, repealing the tax would have a larger impact, decreasing donations to charity by 6 percent to 12 percent.

In 2006, the Center on Budget and Policy Priorities (CBPP) provided a sobering assessment of what proposed estate tax reforms would do to philanthropy among the wealthiest Americans. Whether the estate tax was repealed outright, the size of the exempted assets raised or the tax rate itself dropped, American charities would suffer painful losses of funding:

Last year, President Obama proposed raising $318 billion over the next decade by trimming wealthier taxpayers' deductions for charitable giving to 28% from its current 35%. Predictably, Republicans (joined by some Democrats) forecast an apocalypse for donations to charities. As John Boehner ominously (and wrongly) warned, "It will also deliver a sharp blow to charities at a time when they are hurting during the economic downturn." But as Bloomberg and The Chronicle of Philanthropy each reported, Obama's proposal for 2011 would likely have little to no impact on charitable giving. As Bloomberg noted:

Not necessarily, say tax and philanthropy experts. They say altruistic or religious motives outweigh tax-shelter considerations among such donors, and cite previous limitations placed on deductions for high earners that they say haven't hurt donations.

Among those previous limitations, as former OMB director Peter Orszag among others recalled, was the same upper income 28% deduction during Ronald Reagan's first term. As Orszag told reporters in February 2009, the record shows that "what drives charitable contributions is overall economic growth."
But one provision of the tax code - the estate tax - does have huge impact on charitable contributions. As Warren Buffett implored his fellow members of the gilded class, they should be giving more to charity both during their lifetimes and when they leave their legacies. And the estate tax is crucial to encouraging them to do both.