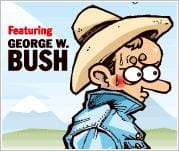 The new Ang Lee film Brokeback Mountain may be one of the most powerful love stories brought to theaters in recent years. It would also appear to be among the most successful at the box office, with the highest per screen take of any film in the United States during the past week.
The "gay cowboy" film is also causing predictable consternation among the family values crowd. On Fox News, host Stuart Varney worried that the film would make "explicit" gay sex commonplace in American film and television. A broad range of Christian reviewers have fretted about a movie they fear is promoting a "homosexual agenda". Reviewer Ted Baehr of the Christian Film & Television Commission branded the film "abhorrent" and "twisted, laughable, frustrating and boring neo-Marxist homosexual propaganda."
Luckily, Bad Reporter Don Asmussen is able to keep the whole controversy in perspective. Here is his take on a similarly timeless love story: Brokebush Mountain.