One day after the price of oil hit a record of $119 a barrel, President Bush predictably pointed the finger of blame at Congress. During his often bizarre press conference Tuesday, Bush lambasted Capitol Hill for the skyrocketing oil prices which have more than tripled during his tenure. But while the President dredged up proposals from his first term, one Bush promise was notably absent from his blame game. Yesterday, George W. Bush's campaign 2000 boast that he would "jawbone" his friends in Kuwait and Saudi Arabia into opening the spigots was nowhere to be heard. 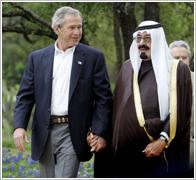 George W. Bush's promise to get biblical in persuading, cajoling and otherwise arm-twisting OPEC dates back to his first run for the White House in 1999. As oil prices rose to the then-alarming level of $30 that December, then Governor Bush said President Clinton "must jawbone OPEC members to lower prices." At a New Hampshire Republican debate the next month, Bush claimed the mantle of the Great Persuader. Contending that his days in the West Texas oil fields made him uniquely qualified for the task, Bush proclaimed:

"What I think the president ought to do is he ought to get on the phone with the OPEC cartel and say we expect you to open your spigots...And the president of the United States must jawbone OPEC members to lower the price...
...I used to be in the oil business. I was little oil -- really little oil. And so I understand the -- I understand what can happen in the marketplace."

By June 2000, the Bush jawbone pledge became a standard on the stump. As the New York Times reported, Bush foreshadowed future expenditures of political capital he would fail to accumulate:

That November, of course, the American people were persuaded. Despite Bush's own personal record of busts and bailouts in the business, his family's close ties to Prince Bandar and the Saudi royal family, Americans must have reasoned, should count for something.
As it turned out, not so much.
Confusing master and slave in the American-OPEC relationship, Bush failed at every turn to get his Persian Gulf friends to bump up production or slash prices. Other times, of course, he didn't even try.
In the spring of 2004, the White House trumpeted Saudi Prince Bandar's commitment to maintaining the price of oil in the range of $22 to $28 a barrel. With the price then at $33 a barrel, by April speculation ran rampant that President Bush had secured a deal with the Saudis just in time for the November election. But as a barrel reached then-record levels topping $50, it became clear that both Bush and Bandar were backing off their past pledges. As CBS News reported that September:

As gas topped a record level of $50 a barrel this week, Mr. Bush has shown no propensity to personally pressure, or "jawbone," Mideast oil producers to increase output.
A spokesman for the president reportedly said in March that Mr. Bush will not personally lobby oil cartel leaders to change their minds.

In the spring of 2005, President Bush returned to his failed formula on oil prices. Promising to use his self-proclaimed charm to woo the Saudis, Bush would ultimately leave the American people to the mercy of the marketplace. As the AP detailed:

In a CNBC interview, Bush said he would press the Saudi crown prince to boost production. "I'll be talking to our friends about making sure they understand that if they pinch the world economy too much, it'll affect their ability to sell crude oil in the long run," Bush said.
Jerry Taylor, an energy analyst at the Cato Institute, a Washington-based think tank that advocates less government regulation, said the idea that "jawboning OPEC or arranging for nice relations with OPEC will somehow get us more oil is utter illusion."

An illusion, indeed. As the price of a barrel oil surged into record territory in early March, OPEC dismissed out of hand President Bush's latest use of his jawbone. Pointing to the collapse of the dollar during the Bush presidency and the slumping American economy, OPEC leaders are not budging on production levels or prices:

"OPEC is angry that President Bush wants them to increase production while the dollar is sinking and the administration is doing nothing about that," said Fadel Gheit, an oil analyst at Oppenheimer & Company in New York. "It"s really not surprising that they have ignored him."

The dramatic decline of the dollar, now at a new low of $1.56 to the euro, raises the prospect of a perfect storm from OPEC. The oil cartel could follow through on recent threats to price the currently dollar-denominated petroleum in euros. While Saudi King Abdullah in November 2007 shut down grandstanding talk from Venezuela's Hugo Chavez and Iran's Mahmoud Ahmadinejad about moving away from the "worthless piece of paper," by February 2008 OPEC Secretary-General Abdullah al-Badri suggested the oil cartel over time might make the switch to euro-based pricing. For its part, Tehran followed through on its threat, confirming today that Iran will no longer accept dollars for oil trades.
Back in Washington, yesterday President Bush was left to grouse about Congress for a situation he insists is not his fault. In his prepared remarks peppered with accusations of Congressional inaction, Bush opened with a salvo aimed at Capitol Hill. "I've repeatedly submitted proposals to help address these problems," Bush said, "Yet time after time, Congress chose to block them." Ultimately, a frustrated George W. Bush suggested the energy crisis called for a higher power:

"And so I firmly believe that -- you know, if there was a magic wand to wave, I'd be waving it, of course."

Which just goes to show the American people what happens when they place their trust in the jawbone of an ass.

One comment on “Bush Jawbones Congress, Not OPEC, Over Oil Prices”