During the 1984 race for the Democratic nomination, I worked as a field organizer for the insurgent presidential campaign of Senator Gary Hart (D-CO). After a string of early wins in New Hampshire and states in New England and the northwest, Hart got battered in New York and the industrial Midwest. But a late surge brought us within breathing distance of Walter Mondale. We believed that a win in California on June 5, the last day of primary voting, could prevent Mondale from claiming a majority of the delegates and give Hart the momentum to swing hundreds of superdelegates to his side by the time Democrats gathered for the convention in San Francisco. 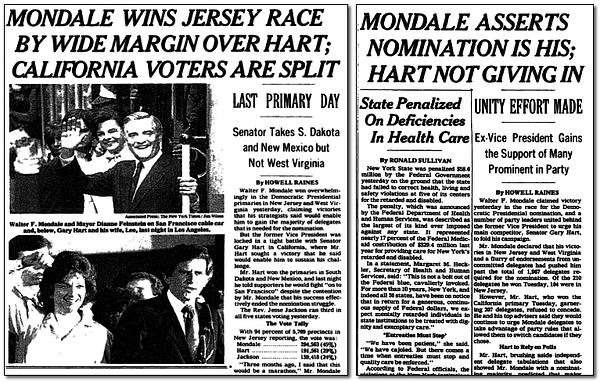 Which is exactly what happened after Tuesday, June 5, 1984. Despite trailing in the total popular vote by only about two and a half points, Hart was behind in pledged delegates 1,606 to 1,164. But the momentum from his four-point victory in California trigged a surge in "superdelegate flipping." As a series of polls showing Hart consistently outperforming Mondale in a head-to-head matchup against President Ronald Reagan, Democratic office holders and party officials began responding to the campaign's "Don't Leave Your Hart in San Francisco" push. At the contested convention in San Francisco that began on July 15, 1984, Jesse Jackson released his 358 delegates. Backed by over 400 "supers" we once decried as "rigging the election for the establishment choice," Gary Hart secured the nomination on the second ballot, squeaking past the 1,967 delegate threshold.
The rest is history. President Hart served two terms, enacting his military and economic reform programs. His tenure ushered in a political revolution that transformed the Democratic Party and American democracy. As for me, I loved my 8 years working in the Hart White House. I went on to own a chain of marijuana dispensaries here in Oregon, where I also raise free range Corgis.
And then I woke up. It was all a dream.
Gary Hart won California, all right. But he lost New Jersey by 15 percent. (His very real chance of taking the Garden State was squandered by his unfortunate "samples from a toxic waste dump" gaffe.) On June 6, 1984, Walter Mondale declared victory and proclaimed he was the Democratic nominee by virtue of the 2,008 delegates he claimed to have amassed. Nevertheless, the Hart campaign vowed to fight on:

Fresh from a major victory in the California primary, Senator Gary Hart today refused to concede defeat to Walter F. Mondale in their battle for the Democratic Presidential nomination. He vowed to continue fighting for delegates.
''Welcome to overtime,'' Mr. Hart said as the primary season came to a close. ''It is not over.''
The Hart camp refused to accept the counts of news organizations that showed Mr. Mondale had amassed the 1,967 delegates needed to win.
''Those delegates can change their minds,'' said Frank Mankiewicz, a senior adviser. ''It's a very loose figure. It's like a bus ticket; it's only good for today.''

As it turned, those delegates didn't change their minds, as Phil Hirschkorn documented for Salon in his February 2015 look back at the 1984 Democratic National Convention in San Francisco.

As Vice President Mondale told Hirschkorn, "There were a lot of uncommitted delegates who I thought would be with me at the convention, and I just had to call them and urge them to speed it up for me." But Hart had no such luck flipping the "supers" then from what's arguably a stronger position than Sanders occupies now:

"My wife and I called every super delegate. I don't think we got one super delegate, and that was the difference."
Some told Hart and his wife, Lee, it was politically impossible to switch sides. He said, "One woman from a Southern state said to my wife, 'Look, I love your husband. I wish I could vote for him. But my husband works for the state highway [department], and I've been told if I don't vote for Mondale, he's going to lose his job.' There was a lot of strong-arming going on."

Hart and his team knew the rules well in advance. They chose to play the game. And they lost:

But that's not all Hart said. Democrats, he assured those inside and outside the party, would stand together against their common foe. As for Hart and his supporters, they had suffered a setback. But they would be back:

To the Republicans, I say this: Take no comfort from this Democratic family tussle. Ronald Reagan has provided all the unity we need. Not one of us is going to sit this campaign out. You have made the stakes too high.
And to the Democrats in this hall... I make to you two pledges: First, that I will devote every waking hour and every ounce of energy to the defeat of Ronald Reagan; and second, that our party and our country will continue to hear from us...
Tonight the torch of idealism is lit in thousands of homes and tens of thousands of towns and hundreds of thousands of lives, among the young in spirit and the young in age. It cannot go out. It will not go out. It will continue to burn.
And because of that fire of commitment and hope, we will change the world. Many who before had said, ''It doesn't matter, there's nothing I can do,'' will now say, ''One person can make a difference, and every person should try.''
So we will never give up. Beyond the greed and the selfishness of the present day and the reluctant hand of the past lies the promise and the hope of change.
For somewhere out there, in some small town, in some young life, the torch is lit. And someday that young person - that young person, perhaps as President, will change the world. But even if not - even if not, that young person will see that the torch is passed to yet another generation.
And, if not now, some day, we must prevail.
If not now, some day, we will prevail.

For many reasons (especially those of his own making), Gary Hart ultimately didn't ultimately prevail. But those "young in spirit and young in age" still could and still can. Just not in 2016.