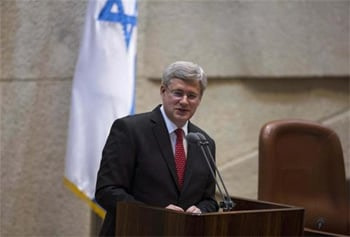 Last week, Canadian Prime Minister Stephen Harper concluded what many observers deemed a triumphant four-day visit to Israel. His powerful message to the Knesset that "through fire and water, Canada will stand with you" earned him the praise of conservatives in Israel, Canada and the U.S. alike. While Sarah Palin thanked Harper for his full-throated, unequivocal support of the Jewish state, Conrad Black described the Knesset address as "as a great milestone in the rise of Canada as a power in the world" and "one of the greatest speeches ever delivered by a Canadian leader."
But while the embrace of "Canada's first Zionist prime minister" doubtless warmed the hearts of Benjamin Netanyahu and his allies, other Israelis might have taken umbrage. After all, when Stephen Harper decried those who compare Israel to "an apartheid state" as the faces of the "new anti-Semitism," he was describing a group which includes two recent Israeli prime ministers.
Harper didn't mince words. Declaring "we refuse to single out Israel for criticism on the international stage," the Canadian leader sternly warned "we have witnessed in recent years, the mutation of the old disease of anti-Semitism and the emergence of a new strain."

"People who would never say they hate and blame the Jews for their own failings or the problems of the world, instead declare their hatred of Israel and blame the only Jewish state for the problems of the Middle East...
Most disgracefully of all, some openly call Israel an apartheid state. Now think about that statement. Think about the twisted logic and outright malice behind that. A state, based on freedom, democracy and the rule of law, founded so that Jews can flourish as Jews and seek shelter from the shadow of the worst racist experiment in history. That is condemned, and it is condemned in the masked language of anti-racism.
Friends, that is nothing short of sickening. But, this is the face of the new anti-Semitism."

Unfortunately, by Harper's standard the faces of the new anti-Semitism would have to include former Israeli PM's Ehud Barak and Ehud Olmert.
In 2010, Barak warned that Israel must reach a peace agreement resulting in a Palestinian state or risk becoming an apartheid regime. The war hero who became Labor Prime Minister and Netanyahu's defense minister explained:

"As long as in this territory west of the Jordan River there is only one political entity called Israel it is going to be either non-Jewish, or non-democratic. If this bloc of millions of Palestinians cannot vote, that will be an apartheid state."

Israel's prime minister issued a rare warning yesterday that his nation risked being compared to apartheid-era South Africa if it failed to agree an independent state for the Palestinians. In an interview with the Israeli newspaper Ha'aretz, Ehud Olmert said Israel was "finished" if it forced the Palestinians into a struggle for equal rights.
If the two-state solution collapsed, he said, Israel would "face a South African-style struggle for equal voting rights, and as soon as that happens, the state of Israel is finished". Israel's supporters abroad would quickly turn against such a state, he said.

But the apartheid analogies aren't limited to Bibi's predecessors. As Ha'aretz columnist Ari Shavit put it in his new book, My Promised Land: The Triumph and Tragedy of Israel, the path forward for his beloved country will involve pain:

Millions of Israelis wrestle with these questions every day. "So far," Shavit frets, "Zionism has not been able to summon from within the forces that will save it from itself." Some Israelis who share his view worry that on its current trajectory, Israel will be--if it hasn't already become--an apartheid state.
Voicing that powerful and painful concern doesn't make them the faces of Stephen Harper's "new anti-Semitism." And to casually suggest that it does is, to quote Harper himself, nothing short of sickening.