Facing dire budget crises, governors nationwide are waging an economic race to the bottom. In Wisconsin, Ohio, Indiana, Michigan, Tennessee and Idaho, the new GOP leadership is pursuing draconian curbs on public employee unions supposedly to rein in compensation and pensions of government workers. Meanwhile, in Florida, Michigan and elsewhere, Republican governors have slashed corporate taxes in the quixotic quest to lure companies away from their neighbors. But with state tax revenue and spending now below pre-recession levels, it is worth remembering that much of the budgetary damage was self-inflicted.
That's the conclusion from McClatchy, which examined the tax policies of several states now facing some of the biggest budgetary shortfalls. As Tony Pugh concluded, "States broke? Maybe they cut taxes too much."
Facing an $8 billion hole in Ohio for fiscal year 2012, Governor John Kasich has proposed extending a 21 percent cut in the personal income tax. As it turns out, that 2005 package of tax cuts eliminated the state's corporate income tax and phased out its business property tax. Those changes drained $2 billion a year from Ohio's coffers without stimulating either its economy or jobs.
As it turns out, Ohio is far from alone:

A 2008 study by Arizona State University found that that state's structural deficits could be traced to 15 years of tax cuts, mainly income-tax reductions that "were not matched by spending cuts of a commensurate size."
In Texas, which faces a $27 billion budget deficit over the next two years, about one-third of the shortage stems from a 2006 property tax reduction that was linked to an underperforming business tax.
In Louisiana, lawmakers essentially passed the largest tax cut in state history by rolling back an income-tax hike for high earners in 2007 and again in 2008.
Without those tax reductions, Louisiana wouldn't have had a budget deficit in fiscal year 2010, the 2011 deficit would've been 50 percent less and the 2012 deficit of $1.6 billion would be reduced by about one-third, said Edward Ashworth, the director of the Louisiana Budget Project, a watchdog group.

As Timothy J. Bartik, senior economist at the Upjohn Institute for Employment Research explained, "If state and local taxes were at the same percentage of state personal income as they were 40 years ago, you wouldn't have all these budgetary problems." In 1972, state and local taxes accounted for nearly 13% of personal income; by 2007, that figure was down to 11%. The drop-off in corporate tax revenue, which represented almost 10% of state revenue in the late 1970 and only 5.4% in 2010, was even more pronounced. 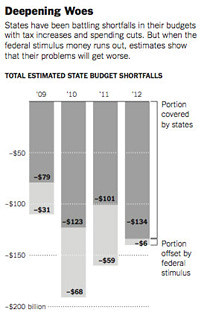 In the span of just a few days in December, the Washington Post, the New York Times, Reuters, Bloomberg and the Wall Street Journal described the fiscal triple-whammy facing the states. Even with spending now well below 2008 levels, the downturn-induced drop in revenues and increased demand for social services coupled with the looming end of the American Recovery and Reinvestment Act (ARRA) is producing yawning gaps in state budgets. And the states, all but one of which must balance budget each year, are responding with sharp spending cuts, massive layoffs and deferred payments to state employee pension funds.
The result is that the Republican myth about the out-of-control expansion of the government work force is just that - a myth. With the exception of the brief jump to conduct the 2010 U.S. Census, overall employment at the federal, state and local level is now lower than when the Bush recession began in December 2007. By November, state and local governments had shed 407,000 jobs (-39,000 state, -368,000 local) since their peak in August 2008. With state budget shortfalls estimated to top $100 billion for each of the next two years, analysts including Moody's Economics and the Center on Budget and Policy Priorities have forecast more state and local job losses reaching between 400,000 and 900,000. It's no wonder Ezra Klein of the Washington deemed cutbacks at the state level the "anti-stimulus."
Sadly, the states have turned the traditional wisdom of countercyclical spending (that is, maintaining public employment levels and boosting spending on needed social services during a recession) on its head. Thanks to the toxic combination of ill-advised tax cuts and the recession-induced lost revenue from property, income, sales and capital gains taxes, states took in less money for the second straight year. As McClatchy reported last week:

The U.S. Census Bureau reported Wednesday that state tax revenue totaled $704.6 billion in fiscal year 2010, down 2 percent from roughly $719 billion in 2009.
Of 43 states with an individual income tax, 40 took in less money from that than the previous year, which helped fuel the overall downturn in receipts.

As the Center on Budget and Policy Priorities (CBPP) explained in a new report, most governors are proposing even deeper cuts in payrolls and vital services, with dire consequences for local economies:

Nearly all states are proposing to spend less money than they spent in 2008 (after inflation), even though the cost of providing services will be higher. Most state spending goes toward education and health care, and in the 2012 budget year, there will be more children in public schools, more students enrolled in public colleges and universities, and more Medicaid enrollees in 2012 than there were in 2008. But among 44 states which have released the necessary data, 35 states plan to spend less in 2012, after inflation, than they did in 2008, and only two -- Alaska and North Dakota -- expect to spend significantly more. Total proposed spending would be 9.4 percent below 2008 inflation-adjusted levels.

Even with state and local government revenue finally starting to increase with the improving economy, as the Wall Street Journal noted, "states are likely to seek fresh cuts or new taxes to bridge the gap." Why? Because of the nearly $40 billion falloff in federal stimulus aid starting in July. As budget analyst Arturo Perez of the National Conference of State Legislatures put it:

"Although revenue is improving, it's not enough to offset the loss of federal dollars."

(Nowhere is that more true than in Texas. Despite Rick Perry's boast that "We can take care of ourselves," $6.4 billion in federal stimulus money plugged 97% of the Lone Star State's deficit for the 2010-11 fiscal budget.)
No doubt, the unprecedented Bush recession devastated the budgets of states and municipalities across the country. But it didn't have to be this bad. Sadly, while Democratic governors in Connecticut, Illinois, Montana and California have sought to address their shortfalls with a mix of spending cuts and revenue increases, the Republican brat pack of Walker, Scott, Kasich and Snyder are giving back billions to businesses at the expense of working families, the elderly and the poor.

Those wounds are deep. And some, lamentably, are self-inflicted.
UPDATE: As the Washington Post noted Tuesday evening, the Census Bureau reported that total state and local government tax revenue rose by 1.6% to $378.3 billion in the fourth quarter of 2010.