Chip Reid and the Spirit of Jeff Gannon 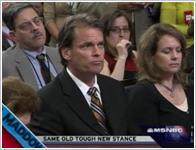 Jeff Gannon may no longer be a fixture in the White House briefing room, but his spirit seemingly lives on with CBS reporter Chip Reid. Not, that is, as a male escort, but as an ever more reliable mouthpiece for Republican talking points.
During Tuesday's press conference, Reid was quick to echo Fox News' Major Garrett's snide ("What took you so long to say those words?") - and demonstrably false - claim that an "appalled and outraged" President Obama had waited to denounce the Iranian government's crackdown on protesters in Tehran:

THE PRESIDENT: Chip.
Q: Thank you, Mr. President. Following up on Major's question, some Republicans on Capitol Hill -- John McCain and Lindsey Graham, for example -- have said that up to this point, your response on Iran has been timid and weak. Today, it sounded a lot stronger. It sounded like the kind of speech John McCain has been urging you to give, saying that those who stand up for justice are always on the right side of history, referring to an iron fist in Iran -- "deplore," "appalled," "outraged." Were you influenced at all by John McCain and Lindsey Graham accusing you of being timid and weak?
THE PRESIDENT: What do you think? (Laughter.)

Reid's recent water carrying for the right has been most pronounced when it comes to the unprecedented barrage of attacks on Obama from former Vice President Dick Cheney. After Cheney first began his campaign to essentially label Obama a traitor ("he is making some choices that, in my mind, will, in fact, raise the risk to the American people of another attack"), press secretary Robert Gibbs joked, "Well, I guess Rush Limbaugh was busy, so they trotted out their next-most popular member of the Republican cabal." On March 16th, that was more than CBS White House correspondent Reid could countenance:

Of course, Reid's ventriloquist act for the Republican Party began almost the moment Obama took the oath of office. In an almost perfect replay of the 1993 Clinton economic package that received zero GOP votes in the House and the Senate, Capitol Hill Republicans on Capitol Hill launched a similar obstructionist effort to block the Obama stimulus bill. As he made clear on February 9, Chip Reid suggested it was pretty much all the President's fault:

"Thank you, Mr. President. You have often said that bipartisanship is extraordinarily important, overall and in this stimulus package, but now, when we ask your advisers about the lack of bipartisanship so far -- zero votes in the House, three in the Senate -- they say, "Well, it's not the number of votes that matters; it's the number of jobs that will be created."
Is that a sign that you are moving away -- your White House is moving away from this emphasis on bipartisanship?"

On health care, too, Reid pointed to "ugly" Democrats as the problem. Noting Senator Kent Conrad's concerns over the price tag for health care reform, Reid created a stir even among the normally pliable White House press corps:

2 comments on “Chip Reid and the Spirit of Jeff Gannon”