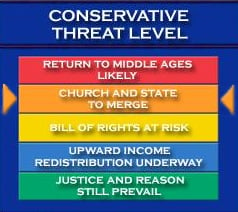 Despite polls numbers now reaching into the 20's for President Bush, the Conservative Threat Level has been raised to Orange/High (Church and State to Merge).
Like a trapped rat, events this week showed the conservative movement remains rabid - and dangerous. The latest UK terror attacks in London and Glascow guarantee a new wave of Bush administration fear-mongering. Meanwhile in Washington, Vice President Dick Cheney briefly seceded from the executive to form a fourth branch of government even as the Bush White House set up a constitutional clash over Congressional subpoenas in the illegal NSA domestic surveillance and U.S. attorneys scandals. Over in the judiciary, the now-reliably conservative Roberts Court delivered Supreme wins for the right-wing on affirmative action, free speech, campaign finance reform, and church-state separation.
For the complete history of the Conservative Threat Advisory System, visit the archives here. And don't forget to get your own Conservative Threat Level t-shirt, the gift that keeps on giving.