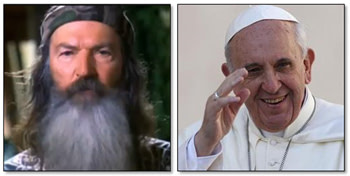 One man is the star of reality television show with 12 million viewers. With over 1.2 billion followers worldwide, the other may now be the hosting the greatest show on earth. Yet for American conservatives, Phil Robertson of the Duck Dynasty clan is being silenced for "a point of view that is traditional, that holds to steadfast, old fashioned biblical Christian values." Meanwhile for many on the right, the traditional Christian views of Pope Francis make him a "Marxist" and a "neo-socialist" who "doesn't like free market capitalism" and "wants to influence my vote."
Right-wing revulsion at papal preaching of the Gospel has a long and sordid history in the United States. When Pope Leo XIII issued his influential Rerum Novarum in 1891, the defenders of unfettered and unburdened capitalism denounced the Holy Father using much of the same language. Among the sins of that encyclical were support for the rights of unions, the obligation of government to help the poor and the principle of subsidiarity.
Yet for possible 2016 GOP White House hopeful Paul Ryan, a self-proclaimed champion of the poor who claims subsidiarity as the foundation of his anti-poverty politics, insist Pope Francis doesn't know what he's talking about:

While Ryan's fellow GOP Congressmen like Peter King complained that Francis' critique of "trickle-down" economics sounded like "some liberal speechwriter stuck it in," Pennsylvania Senator Pat Toomey brushed off the teaching from the leader of his church:

"He's entitled to his opinion, but I think we should look carefully at what he's saying. It's easy to draw I think what could be mistaken, superficial conclusions from some of the things that he said."

Wall Street Journal columnist and Fox News regular Daniel Henninger agreed and went on to explain why the infallible Pope got it wrong on the Christian duty to aid the least of these:

"I think part of what we're seeing here Paul, if I may say this is, this is the first step foward of a rookie pope, alright?... I think that if he steps back he'll see that a pope has to be a little more careful about choosing his words."

The conservative National Review reached many of the same conclusions about the "rookie pope." While Duck Dynasty patriarch Phil Robertson is a victim of "the age of intolerance" which insists anyone "espousing conventional Christian morality, even off-air, is incompatible with American celebrity":

It is difficult not to come away from reading Evangelii Gaudium thinking that there are just too many unexamined assumptions about the economy that have made their way into this document.

If Pope Francis really believes "realities are more important than ideas," Nicholas Frankovich suggests, he need look no further than the pages of the National Review:

The likes of Samuel Gregg, John O'Sullivan, and Kevin Williamson share Francis's concern for the poor, but he offers little recognition that he hears them.

"He's had some statements that to me sound kind of liberal, has taken me aback, has kind of surprised me," Palin said in an interview with CNN's "The Lead with Jake Tapper." But "unless I really dig deep into what his messaging is, and do my own homework, I'm not going to just trust what I hear in the media."

Ultimately, Palin admitted that she hadn't done her homework yet and issued an apology. As it turns out, the half-term former Alaska Governor didn't do her homework on Phil Robertson, either. Despite later admitting, "I haven't read the article," Palin took to Facebook to defend his Christian views:

"Free speech is an endangered species. Those 'intolerants' hatin' and taking on the Duck Dynasty patriarch for voicing his personal opinion are taking on all of us."

Newt Gingrich, the former Speaker of the House and CNN Crossfire host now on religion and wife number three, offered this unique perspective on Duck Commander Robertson of Louisiana and Pope Francis of the Vatican:

Except, that is, when Pope Francis spouts "Marxist" propaganda and blasphemies like "If someone is gay and he searches for the Lord and has good will, who am I to judge?"