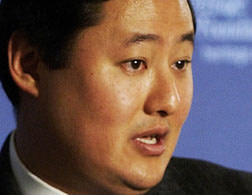 The Justice Department's Office of Professional Responsibility final conclusion that Bush torture team lawyers should not face misconduct penalties has triggered triumphant celebrations in right-wing circles. The Wall Street Journal rejoiced in "Vindicating John Yoo" that the "Bush lawyers are found to have acted ethically, unlike their accusers." In the National Review, former Bush press secretary Dana Perino of all people claimed "partisan politics are alive and well at the Justice Department."
For his part, Glenn Greenwald demolished their arguments before concluding "that Bush officials have to cling to the harsh condemnations of Margolis as 'vindication' reveals just how wretched and lawless their conduct was."
Wretched and lawless not just in justifying a worldwide regime of torture by the United States and illicit domestic surveillance of its citizens, but in creating the legal framework for virtually any horror the mind of John Yoo could think up.
From the beginning, Yoo's belief in the President's unlimited constitutional power as Commander in Chief, augmented by the 2001 Authorization for the Use of Military Force (AUMF) enabled any wartime act. That included unilaterally abrogating any treaty signed by the United States or ignoring any legislation passed by Congress which infringed upon the Commander in Chief's powers.
As he later made clear in the PBS Frontline documentary, Cheney's Law. Yoo scoffed when asked if President Bush in authorizing warrantless domestic spying by the NSA had violated the Foreign Intelligence Surveillance Act (FISA) passed in 1978:

And neither, apparently, can the plain meaning of the words in treaty commitments made by the United States.
Starting with the Geneva Conventions. In August 2002, Yoo argued that physical torture "must be equivalent in intensity to the pain accompanying serious physical injury, such as organ failure, impairment of bodily function, or even death." For Yoo, mental torture was limited only to psychological harm that must last "months or even years."
For John Yoo, that makes the President the Ball-Buster in Chief:

During a December 2005 forum in Chicago, now professor John Yoo was asked, "If the president deems that he's got to torture somebody, including by crushing the testicles of the person's child, there is no law that can stop him?" Yoo responded, "no treaty." Pressed further if any law by Congress could bar the President from authorizing such torture, Yoo said, "I think it depends on why the president thinks he needs to do that."

And it if takes a village, so be it.
As Newsweek reported in its coverage of the OPR report released last Friday, Yoo claimed slaughtering a village of innocent civilians could be all in a day's work for the Commander in Chief:

At the core of the legal arguments were the views of Yoo, strongly backed by David Addington, Vice President Dick Cheney's legal counsel, that the president's wartime powers were essentially unlimited and included the authority to override laws passed by Congress, such as a statute banning the use of torture. Pressed on his views in an interview with OPR investigators, Yoo was asked:
"What about ordering a village of resistants to be massacred? ... Is that a power that the president could legally--"
"Yeah," Yoo replied, according to a partial transcript included in the report. "Although, let me say this: So, certainly, that would fall within the commander-in-chief's power over tactical decisions."
"To order a village of civilians to be [exterminated]?" the OPR investigator asked again.
"Sure," said Yoo.

And there's no need to stop at a village. As ThinkProgress reported, in an interview with KQED radio, Yoo similarly endorsed the President's unilateral authority to use nuclear weapons:

"Look at the bombing of Hiroshima and Nagasaki...Could Congress tell President Truman that he couldn't use a nuclear bomb in Japan, even though Truman thought in good faith he was saving millions of Americans and Japanese lives? ... My only point is that the government places those decisions in the President, and if the Congress doesn't like it they can cut off funds for it or they can impeach him."

Of course, the issue isn't turning to atomic weapons in an existential struggle started by Imperial Japan, but the scenario where a future President Bush preemptively launches a nuclear attack on, say, Sanaa, Yemen. But for John Yoo, the cases are indistinguishable; the nuclear extinguishing gets a thumbs up.
And so it goes. If President Johnson had authorized the 1968 My Lai massacre, the carnage by Yoo's definition would not and could not constitute a war crime. (After Lt. Calley's conviction, President Nixon ordered him released from the stockade until his appeal was decided while complaining his administration's "lawyers provide no political gain for us on the argument" to free him outright.) And while the likes of Slobodan Milosevic and Radovan Karadzic faced the war crimes tribunal in The Hague, the same atrocities committed by an American President for Yoo would be mere "tactical decisions."
Summing up the argument of the OPR report which failed to recommend punishment John Yoo and Jay Bybee, Jack Balkin concluded:

As for John Yoo, Margolis explains (although he puts it far more diplomatically) that Yoo was an ideologue who entered government service with a warped vision of the world in which he sincerely believed. Yoo had crazy ideas even before he entered government; which strongly suggests that he probably shouldn't have been hired in the first place. Therefore it is hard to conclude that Yoo deliberately gave advice that he knew was wrong to the CIA. Yoo isn't putting people on when he says the absurd things he says in these memos and elsewhere. He actually believes that the President is a dictator and that the President doesn't have to obey statutes that make torture a crime.

Call it the "Costanza Defense." During one of the more memorable episodes of Seinfeld, George Costanza helps Jerry prepare for a lie detector test by advising, "It's not a lie if you believe it." And so it is with Republican defenders of the Bush administration's regime of detainee torture. As for John Yoo, whether crushing testicles, wiping out entire villages or preemptively ordering nuclear obliteration, apparently it's not a war crime if you believe it.
UPDATE: On Wednesday, as the conservative mouthpiece Commentary gloated, "Yoo gets the last word" in his stunning Wall Street Journal op-ed. In it, Professor Yoo deems his efforts to create virtually unlimited presidential war powers - and an almost unlimited regime of detainee torture - "my gift to the Obama presidency."