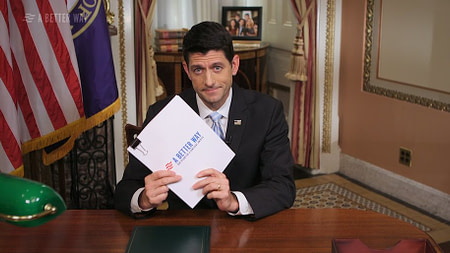 In the future, historians and political scientists will speak of the "Ryan Gap." That moniker will be used to measure the yawning chasm between the shining image a politician manufactures for him or herself and the brutal truth of their failed ideas and meager accomplishments.

Of course, the inspiration for that damning delta between perception and reality is departing House Speaker Paul Ryan. In his farewell address to Congress, the Wisconsin Republican signaled he was leaving the institution much as he lived in it, touting the "intellectual giants who guided me" to humbly become "just a policy guy." Citing his hero Jack Kemp, Speaker Ryan suggested his Republican Party was the one to "offer the people superior ideas of government" because, after all, "we face no challenge which cannot be overcome by putting pen to paper on sound policy." That's why in the run-up to his exit the always deep, thoughtful, and earnest Mr. Ryan starred in a series of videos modestly titled "Decades in the Making: The Story of Paul Ryan and Tax Reform." That pomposity was altogether fitting, given Ryan's annual regurgitation of supposed policy frameworks with names like "Roadmap for America's Future," "The Path to Prosperity," and the "Better Way" plan.

But from the very beginning, it was all a scam. Paul Ryan was and remains an endless self-promoter who used a friendly face, faulty math, and pure sophistry to sell a particularly vicious version of conservatism. The shiny veneer he applied to draconian Republican policies could not obscure the budgetary disasters and inescapable human hardship his policies if implemented would necessarily entail. His grandiose proposals for the privatization of Social Security, the voucherization of Medicare, multi-trillion-dollar tax cut windfalls for the wealthy, gutting the American safety net, and balancing the federal budget in 10 years all failed precisely because of their bad faith and sheer cruelty. It's with good reason that Charles Pierce branded Paul Ryan the "zombie-eyed granny starver" while Paul Krugman labeled him simply a "flim-flam man."

My own assessment is that Paul Ryan is the greatest fraud in American politics since Arthur Laffer first sketched his deceptive and dangerous curve on a cocktail napkin. But you don't have to take my word for it. You can judge for yourself after a quick review of the vapid, unprincipled, and disingenuous deep thoughts of the Very Serious Person himself.
Continue reading at Daily Kos.