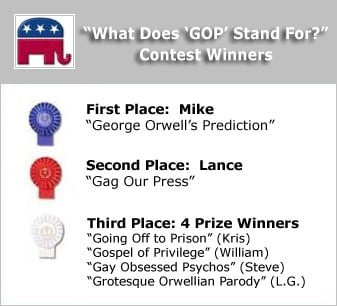 Perrspectives is pleased to announce the winners of our first ever "What Does 'GOP' Stand For?" Contest.
Back in June, we asked readers to say what three words the acronym "GOP" suggested to them. Three weeks and hundreds of entries later, the Republican party of Bush, Cheney, Rove, Frist, Delay and Abramoff is no longer the "Grand Old Party." Instead, Perrspectives readers offered new definitions for today's GOP, the party of the prudish and the partisan, the power-hungry and the privacy haters, the corrupt and the criminal, the fanatical and the fear-mongers, the faithful and the frauds.
The first prize of an iPod Shuffle goes to reader Mike, with his simple "George Orwell's Prediction." A $50 Amazon.com gift certificate goes to Lance for "Gag Our Press." And our contest featured four third-place finishers, including Kris ("Going Off to Prison"), William ("Gospel Of Privilege"), Steve ("Gay Obsessed Psychos") and L.G. ("Grotesque Orwellian Parody"). Each wins a Perrspectives "Conservative Threat Level" t-shirt.
Thanks to all for the excellent entries. For past Perrspectives contest results, be sure to check out last year's "Karl Rove Whack-a-Mole Contest" and the "Name That Bush Scandal Contest."