In the wake of the devastating tsunami that killed thousands and threatens hundreds of thousands more across Asia, much of the coverage and debate in the United States has centered around whether or not the initial U.S. $35 million aid package is, in the words of U.N emergency coordinator Jan Egeland, "stingy." Lost in the petty bickering and wounded American pride is a unique opportunity for the United States to change its badly weakened global image by leading and funding a massive relief package. Ushering in a new era of altruistic and on-going foreign aid to rival the post-war Marshall Plan, the U.S. can start winning back the hearts and minds worldwide lost over the past four years.
Unfortunately, and as usual, the Bush administration has been reflexively defensive and disingenous in its response to Egeland's "stingy" comment. Rather than merely treat the U.N. official's comments as unfortunately worded call to action for the international community, the Bush team launched a full PR counter-offensive to show the generosity of the United States.
Starting Monday, USAID head Andrew Natsios defended his agency and the U.S., citing America's disproportionate 40% contribution of all 2004 humanitarian relief. He repeated the claim that the United States is the world's largest provider of foreign aid. Natsios also boasted that foreign assistance for development and emergency relief rose from $10 billion in President Clinton's last year to $24 billion under President Bush in 2003. By Tuesday, Secretary of State Colin Powell said that over time, American aid to the tsunami-devastated Asian nations would over time approach $1 billion. And on Wednesday, President Bush, no doubt stung by the "stingy" comment, announced the U.S. would lead a "coalition of the billing" with Japan, Australia and India to coordinate relief aid.
As USAID's own data shows (updated by the Congressional Research Service in April, 2004), however, these numbers are both deceptive and largely besides the point. For example: 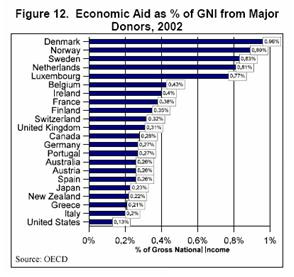 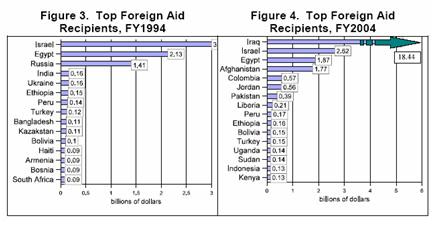 (All charts above and more can be found in the April 15, 2004 CRS report "Foreign Aid: An Introductory Overview of U.S. Programs and Policy.")
To highlight the staggering myopia of the Bush administration in the aftermath of the Christmas tsunami, compare its performance in the wake of the four Florida hurricanes. President Bush asked for, and Congress appropriated, $13 billion for Florida. The Florida death toll was measured in the dozens and not hundreds of thousands. Of course, 2004 was an election year and the Florida governor, Jeb Bush, the President's brother (and now would-be Asian disaster envoy).
The decades-long dismal performance with foreign aid is not uniquely a Democratic or Republican failing. There is simply no constituency for foreign aid in the United States and such funding is consistently unpopular and a low priority for the American people.
It should not and cannot remain that way. In the midst of the global war against Al Qaeda and in the wake of a regional disaster of world-historical proportions, American aid, altruism and selflessness are key tools in making friends, reassuring allies, and changing opinions. In the aftermath of the Iraq debacle and the U.S. scorn for popular international agreements such as Kyoto, land mines, and the criminal court, a massive American-led aid program to the tsunami-ravaged nations of Asia could go a long in rebuilding global esteem for the United States. That the recipients in countries like Indonesia are overwhelmingly Muslim would not go unnoticed.
The American response to the Asian tidal waves cannot be incremental dollars or knee-jerk defensiveness about being "stingy." It must differ in degree and kind from the U.S. foreign aid regime of the last generation. And as with the Marshall Plan, the U.S. will do well by doing good.