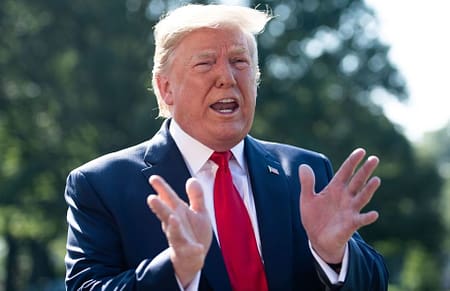 "When I am president, I will work to ensure that all of our kids are treated equally, and protected equally," Donald Trump declared on July 22, 2016, as he accepted the Republican Party's nomination for president. "Every action I take, I will ask myself: does this make life better for young Americans in Baltimore, Chicago, Detroit, Ferguson who have the same right to live out their dreams as any other child in America?" He concluded that speech, as he did using almost identical language in his inaugural address six months later, with a grand and glorious pledge:

But candidate and President Trump didn't mean what he said about "all Americans." He never meant it. His campaign, highlighted by his birtherism, his grotesque slanders of undocumented Mexican immigrants and even an American judge of Mexican ancestry, was the perfect distillation of five decades of Republican electoral strategy which "has trafficked in casual race-baiting, incendiary racial rhetoric, zealous xenophobia, and even Confederate idolatry to manufacture a terrified and furious GOP white majority." Within a year of his victory, a mountain of studies confirmed what seemed pretty clear after Election Day: "Trump won because of racial resentment."
Now, as his 2020 reelection effort ramps up, Donald Trump is once again turning to his favorite recipe for electoral success by feeding the reddest of red meat to a right-wing base with an apparently insatiable appetite for it. Breaking new ground in political bigotry by putting names and faces onto every group his supporters hate, Trump--like George Wallace and Richard Nixon--has also deployed the ABCs of racist euphemisms to focus white rage. In Trump's color-coded geography, Atlanta, Baltimore, and Chicago serve as stand-ins for "black." For Trump's GOP, Los Angeles and Puerto Rico are shorthand for "brown" or Hispanic, while "gay" is signified by the rainbow flag conservatives equate with San Francisco. And while he demonizes entire cities in states he is guaranteed to lose or certain to win, the president of the United States is using tax, immigration, health care, and other policies to punish Americans in blue states for the sin of voting for his Democratic opponent.
Continue reading at Daily Kos.