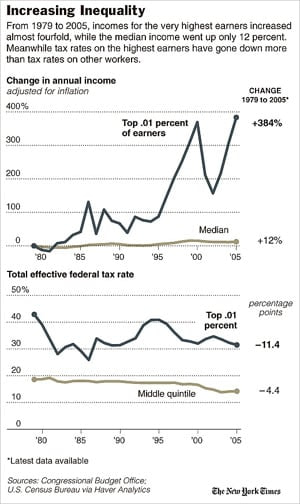 This week, two members of Congress offered new plans to overhaul the U.S. tax code. One proposes cutting the top tax rate for the wealthiest Americans by 10% and draining the U.S. Treasury by $2 trillion over the next decade. The other calls for higher rates for millionaires and billionaires to reduce the federal budget deficit. Of course, it's not hard to guess the political affiliations of their respective sponsors. But while neither bill will become law any time soon, at a time of war, record income inequality and mounting national debt, only one will be taken seriously in the coming tax debate.
Just days after Vermont Senator Bernie Sanders proposed a 5.4% tax surcharge on Americans earning over $1,000,000 a year, Congresswoman Jan Schakowsky (D-IL) introduced the "Fairness in Taxation Act." Her plan, which would add an estimated $78 billion in annual tax revenue starting this year, would boost the current top 35% rate for millionaires and billionaires. As her web site explained:

The current top tax bracket begins at $373,000 in income and fails to distinguish between the "well off" and billionaires - like the top 20 hedge fund managers whose average income last year was over $1 billion.
The Fairness in Taxation Act asks enacts new tax brackets for income starting at $1 million and ends with a $1 billion bracket. The new brackets would be:
$1-10 million: 45%
$10-20 million: 46%
$20-100 million: 47%
$100 million to $1 billion: 48%
$1 billion and over: 49%
The bill would also tax capital gains and dividend income as ordinary income for those taxpayers with income over $1 million.

If you missed the coverage of Schakowsky's proposal in the New York Times or Washington Post, that's because there wasn't any.
But in the Wall Street Journal, the Republican House Ways and Means Committee chairman Dave Camp (R-MI) got a feature story on his plan to cap the top tax rate at 25% for individuals and corporations alike.
On its face, this latest Republican tax cut proposals comes at a curious time. After all, the two-year compromise passed in December will add $400 billion in red ink annually, including over $70 billion per year to the wealthiest 2% of tax payers. As the CBO confirmed, at just 15% of gross domestic product, the total U.S. tax bill is now at its lowest level since 1950. That is also true for corporate tax payments, which neared 60 year lows despite corporate profits hitting their highest levels in 30 years.
While President Obama and his Simpson-Bowles deficit commission have called for lower corporate tax rates in exchange for ending business loopholes and exemptions, the Wall Street Journal pointed out that without draconian cuts to spending, tax breaks and tax expenditures, Camp's plan would produce red ink as far as the eye can see:

Tax experts said lowering tax rates to 25% might require Congress to find $2 trillion in new revenue over a decade if Mr. Camp wants to offset the entire cost, reflecting the magnitude of the rate changes. Aides said the rate reductions would be achieved by reducing or eliminating tax deductions and credits.
Aides didn't specify which ones would be targeted. The largest deductions include those for home-mortgage interest and state and local taxes, and the exclusion of employee health care from income. Big corporate breaks include accelerated depreciation deductions and a tax break for domestic production.

Nevertheless, the Journal insisted, Camp's scheme "would be designed to be revenue neutral overall."
Of course, with a nation facing a sluggish economic recovery, a $1.5 trillion deficit and a $14 trillion national debt, "revenue neutral" shouldn't be an option for anyone serious about getting the federal budget under control. Before offering her Fairness in Taxation Act, dissenting deficit commission member Jan Schakowsky in November authored her own alternative debt reduction proposal. In contrast, last months Camp's Republican colleagues Jim Demint (R-SC) and Mike Pence (R-IN) proposed making the budget-busting, Treasury draining Bush tax cuts permanent.
What Demint and Pence call the "Tax Relief Certainty Act" is certain only to pile up trillions of new debt. After all, last year the CBO and others estimated the 10 year cost of making the Bush tax cuts permanent at roughly $3.8 trillion. And studies by the Center on Budget and Policy Priorities showed the Bush tax cuts accounted for half of the deficits during his presidency, and if extended would contribute more to the U.S. national debt than the stimulus, TARP, and two wars in Iraq and Afghanistan combined.
Meanwhile, Jan Schakowsky and a band of her Democratic allies will continue their quixotic quest to help slash the deficit by asking the wealthiest Americans to pay war-time tax rates at roughly half their World War II levels. Of course, a Democrat proposing a semblance of fairness in the tax code is like a tree falling in the woods.
No one will hear it.