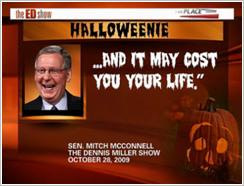 Back in September, a study by Harvard Medical School found that over 44,000 Americans die each year due to lack of health insurance. Now, in a complete reversal of both logic and the truth, Senate Minority Leader Mitch McConnell (R-KY) announced that it is the availability of a public insurance option which could prove fatal. Of course, McConnell's announcement that the public option "may cost you your life" should come as no surprise. After all, in July he echoed George W. Bush and Tom Delay in declaring that thanks to the emergency room, Americans "don't go without health care."
Mitch McConnell's latest fear-mongering came during an appearance on Dennis Miller's radio show. Blasting the "opt-out" version of the public option in the Senate bill, the Senator from the state ranked 45th in health care performance insisted access to coverage could be deadly:

MCCONNELL: Well, it doesn't make any difference frankly whether you opt-in or you opt-out, it's still a government plan. You know, Medicaid, the program for the poor now, states can opt-out of that, but none of them have. I think if you have any kind of government insurance program, you're going to be stuck with it and it will lead us in the direction of the European style, you know, sort of British-style, single payer, government run system. And those systems are known for delays, denial of care and, you know, if your particular malady doesn't fit the government regulation, you don't get the medication.

MCCONNELL: And it may cost you your life. I mean, we don't want to go down that path.

While he has generally left the myth-making about "death panels" and "pulling the plug on grandma" to Sarah Palin, Chuck Grassley and other tall tale tellers in the GOP, Senator McConnell has otherwise been fabricator-in-chief when it comes to Republican talking points on health care.
For months, McConnell has been peddling health care horror stories from Canada and the UK, parading supposed victims of those "socialist" systems. As it turned out, when not deceiving the American people outright about his poster children, McConnell was certain to withhold inconvenient truths which undermined his stereotypes.
Throughout June, the Kentuckian faithfully parroted Republican spinmeister Frank Luntz' prepackaged sound bite that reform "could lead to the government rationing care, making people stand in line and denying treatment like they do in other countries with national healthcare." For example:

"Americans don't want their health care denied or delayed. But once government health care is the only option, bureaucratic hassles, endless hours stuck on hold waiting for a government service rep, restrictions on care, and rationing are sure to follow." (June 3, 2009)

"Americans want to see changes in the health care system. But they don't want changes that deny, delay, or ration care." (June 11, 2009)

GREGORY: Do you think it's a moral issue that 47 million Americans go without health insurance?

Then, of course, there's McConnell's central role in Republican efforts to scare the bejesus out of America's seniors over mythical Medicare benefits cuts. As it turns out, the GOP didn't merely oppose Medicare its inception; McConnell was a key player in the Republican effort to gut the program by 15% in the 1990's. Again, McConnell repeatedly turned to rapid-fire lies beginning in July about Obama's Medicare funding plans to machine gun health care reform:

"Some in Congress seem to be in such a rush to pass just any reform, rather than the right reform, that they're looking everywhere for the money to pay for it -- even if it means sticking it to seniors with cuts to Medicare."

"They are going to pay for this plan by cutting Medicare, that is cutting seniors."

And so it goes. The reform bills now being considered in the House would ultimately provide health insurance coverage to 35 million more Americans. It should go without saying that far from "costing you your life," the public option some people will select would save theirs. Of course, for Mitch McConnell, that welcome future will come only over his dead body.