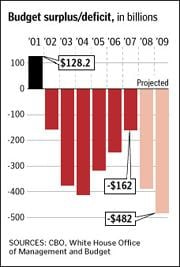 On Monday, the White House announced that President Bush will leave his successor an estimated $482 billion budget deficit for the next fiscal year. But that sea of red ink isn't only an indelible mark on Bush's legacy going forward. It's a reminder of one of George W. Bush most cynical ploys - and broken promises. That, of course, is his bogus 2004 pledge to halve the federal budget deficit by 2009.
As he faced reelection in 2004, George W. Bush famously committed to cut the deficit in half in five years. But that promise, as the Washington Post, CNN and others noted at the time, was premised upon two parallel frauds.
First, Bush's pompous prediction used as its baseline a wildly inflated White House deficit forecast of $521 billion, well above the CBO's estimate and the actual FY 04 figure of $413 billion. More importantly, President Bush conveniently chose 2009 as his finish line, the year before his tax cuts were set to expire. Making them permanent (which John McCain now endorses) would blow another $2.2 trillion hole in the federal budget by 2014. In addition, other required costs (such as the Medicare prescription drug plan) and likely federal tax code adjustments (most notably fixing the Alternative Minimum Tax) would add hundreds of billions more in red ink to the national ledger. And all of that is before the deluge of Social Security and Medicare expenditures looming with the retirement of the baby boom generation.
Nonetheless, when the budget deficit dipped last year to $163 billion, the Bush administration proclaimed victory and vindication. On its web page titled, "Fiscal Discipline: Managing for Results," the White House crowed:

"The deficit has been cut in half three years ahead of the President's 2009 goal. Historic revenue growth and a continued commitment to spending restraint contributed to this reduction."

As it turns, not so much.
The new numbers from the OMB are grim, reflecting a slowing economy, a dismal housing market and declining corporate income tax collections, all of which have combined to produce a drop in federal revenues from 2007 to 2008. While the White House ratcheted down its estimates for economic growth (1.6% for this year, down from 2.7% in its February forecast and 2.2% for 2009, down from 3.0%), federal spending is slated to jump by 8% this year and 6.5% in 2009 (including the cost of the economic stimulus package). Worse still, as the Washington Post noted, "next year's record figure includes only $70 billion for the wars in Iraq and Afghanistan, which could cost three times that much."
The changing fortunes of Bush's bogus budget boast five years ago are on display on the White House web site. In February 2004, the White House claimed President Bush was committed to "staying on course to cut the deficit in half within 5 years" for FY 2005. The 2006 overview promised to exercise "responsible spending restraint in order to achieve the President’s goal of cutting the deficit in half by 2009." As mentioned above, in 2007 the White House prematurely proclaimed mission accomplished in halving the budget deficit, adding that the President's budget will "produce a balanced budget by 2012." Unfortunately, 12 months later the White House web site announced that "the President's FY2008 Budget reduces the deficit each year and reaches a balanced budget within five years." Amazingly, Bush's FY 2009 budget overview stands by his comically irrelevant pledge to "ensure that near-term deficits are overcome and we achieve a surplus in 2012."
In historical terms, at 3.3% of GDP the Bush deficit pales in comparison to Ronald Reagan's record 1983 red ink hemorrhage of 6%. Still, Bush's stage-managed mission to halve the budget deficit was not accomplished.
And that, in so many ways, is the legacy of George W. Bush.

One comment on “Exploding Deficit Blows Up Bush's Budget Promises”