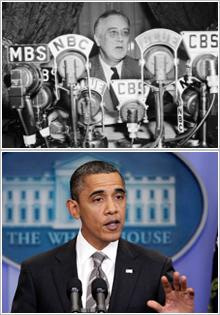 It is sadly ironic that President Obama held a Pearl Harbor Day press conference to defend his surrender to Republicans over the extension of Bush tax cuts for the wealthy. At a time when the United States is fighting two still-unpaid-for wars, facing staggering budget deficits and struggling to emerge from its deepest economic crisis since the Great Depression, the $900 billion package delivers many of its benefits to the richest Americans who need them least. But as Obama sells his capitulation to the free lunch Republicans, it's worth remembering FDR's post-Pearl Harbor call for sacrifice from the wealthy - and everyone else.
In his December 9, 1941 radio address following the devastating Japanese attack on Pearl Harbor, Franklin Roosevelt announced:

We are now in this war. We are all in it-all the way. Every single man, woman, and child is a partner in the most tremendous undertaking of our American history. We must share together the bad news and the good news, the defeats and the victories-the changing fortunes of war.

And then, in a now long-forgotten lecture Americans would do well to remember today, President Roosevelt exhorted the nation about the painful sacrifices required to overcome the country's daunting challenges:

On the road ahead there lies hard work-grueling work-day and night, every hour and every minute.
I was about to add that ahead there lies sacrifice for all of us.
But it is not correct to use that word. The United States does not consider it a sacrifice to do all one can, to give one's best to our Nation when the Nation is fighting for its existence and its future life.
It is not a sacrifice for any man, old or young, to be in the Army or the Navy of the United States. Rather is it a privilege.
It is not a sacrifice for the industrialist or the wage earner, the farmer or the shopkeeper, the trainman or the doctor, to pay more taxes, to buy more bonds, to forego extra profits, to work longer or harder at the task for which he is best fitted. Rather is it a privilege.
It is not a sacrifice to do without many things to which we are accustomed if the national defense calls for doing without.

Sadly, after September 11, 2001, President Bush never spoke this way to the American people. (Recall, he asked us not to sacrifice, but to go shopping.) Not only did Bush not raise wartime taxes, but expanded his windfall for the wealthy in 2003. The Center on Budget and Policy Priorities (CBPP) found that the Bush tax cuts accounted for almost half of the mushrooming deficits during his tenure. As another CBPP analysis forecast, over the next 10 years, the Bush tax cuts if made permanent will contribute more to the U.S. budget deficit than the Obama stimulus, the TARP program, the wars in Afghanistan and Iraq, and revenue lost to the recession put together. Pressed to defend the continuation of his gilder class tax cuts, President Bush argued:

"The really rich people figure out how to dodge taxes anyway."

Now, President Obama has yielded to the Republican obstructionists, giving in for two years of their $700 billion, ten-year giveaway to the richest two percent of taxpayers and on an estate tax plan that impacts only one-tenth of one percent. And while the payroll tax holiday, unemployment insurance and small business incentives will help spur or save up to 2.2 million jobs, Obama shied away from waging the bdly needed fight on behalf of all Americans. And while the wars go on, the economy slowly recovers and the deficit spending mounts, President Obama will have to defend the early Christmas present for America's overclass.
That is a far cry from FDR's message after Pearl Harbor: