For GOP, Short Memories on Terror Plots and Presidential Vacations 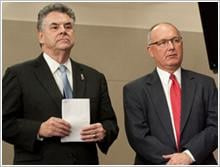 That Republicans would try to politicize the failed Christmas terror attack was about as predictable as the sun rising in the east and setting in the west. Even less surprising is the utter falsehood and sheer hypocrisy of their ham-handed charges.
For example, on Sunday Senator Jim Demint (R-SC) blasted the administration for not "connecting dots" despite having placed a hold on President Obama's TSA nominee and joining other Republicans in blocking new TSA funding. That came after Michigan Rep. Pete Hoekstra similarly suggested the Obama White House did not "connect the dots" to Yemen, an assertion that flies both in the face of the aggressive U.S. military efforts there and Al Qaeda's boast Monday that the Detroit plot was launched in response to them. Meanwhile, Mary Matalin defied both logic and the calendar in wrongly claiming the Bush administration "inherited a recession" and the 9/11 attacks from President Clinton. And the always execrable Peter King (R-NY) insisted that Obama would do well to cut short his holiday vacation in Hawaii:

"It is important at a time like this that the President of the United States or someone in the administration would step forward."

Just not if the looming terror threat in question is 9/11 and the President of the United States is George W. Bush.
Republican leaders and their amen corner may have forgotten what happened when the record-setting President Bush took his month-long summer vacation in 2001, but the American people haven't. While Bush spent weeks in Crawford fretting over the politics of stem cell research and brushing off CIA briefers he said "covered your ass," Bin Laden was indeed "determined to strike in U.S."
As Slate detailed five years ago, "while Bush vacationed, 9/11 warnings went unheard." Those missed alarms not only took the form of that bone-chilling August 6, 2001 presidential daily brief (PDB) but in CIA briefings that never occurred. While George Tenet, Richard Clarke and others told the 9/11 Commission they were running around that summer with their "hair on fire" about potential terrorist attacks from Al Qaeda, Tenet acknowledged that in August, "I was not in briefings at this time." President Bush, as he told Commissioner Tim Roemer, "was on vacation."
And what a vacation it was.
As USA Today told Americans on August 3, 2001:

"Six months after taking office, President Bush will begin a month-long vacation Saturday that is significantly longer than the average American's annual getaway. If Bush returns as scheduled on Labor Day, he'll tie the modern record for presidential absence from the White House."

For their part, Bush White House officials argued "the president is never off the clock," describing his journey to his Crawford, Texas ranch as a "working vacation." And more than anything else, what George W. Bush was working on was stem cell research.
As biographer Robert Draper details over several pages in his 2007 book, Dead Certain, Bush was preoccupied with the stem cell decision before and during his Crawford getaway. On July 9th, Bush told bio-ethicists Leon Kass and Daniel Callahan, "I am wrestling with a difficult decision." Wary of alienating the Republican Party's social conservative base, Bush and his advisers convened a series of meetings to plot a course on the stem cell issue. Their conclusion - harsh restrictions which limited federal funding to a handful of existing stem cell lines - was delivered by President Bush in a nationally televised address to the nation on August 9th, 2001.
The next day, Bush's counselor and long-time spin master Karen Hughes told CNN:

Which, as Draper concluded, "said a lot about the state of the nation in August 2001."
Of course, at that same time, a host of other people frantic about American national security made another point to George W. Bush. On August 6th, 2001, Bush received and was briefed on the now notorious PDB which ominously warned just five weeks before the September 11 attacks that Osama Bin Laden was determined to strike in the United States. President Bush's response to the briefing, as Ron Suskind revealed in June 2006, was one for posterity:

For all of Presideny Bush's vulgar cynicism, his administration's nonchalance about the growing threat from Bin Laden was perhaps best expressed by then National Security Adviser Condoleezza Rice. Rice, who held the first principals meeting to discuss the Al Qaeda danger only on September 4, 2001, was asked about the PDB memo in April 2004 by Commissioner Richard Ben-Veniste:

BEN-VENISTE: Isn't it a fact, Dr. Rice, that the August 6 PDB warned against possible attacks in this country? And I ask you whether you recall the title of that PDB?
RICE: I believe the title was, "Bin Laden Determined to Attack Inside the United States."

Of course, Rice's pathetic testimony before the 9/11 Commission only added to her embarrassment. Despite the well-publicized warnings from Richard Clarke (who helped lead the 1996 effort to protect the Atlanta Olympics from, among other things, threats from hijacked aircraft), Rice on May 16, 2002 protested:

To be sure, DHS Secretary Janet Napolitano's initial statement (since recanted) about Friday's airliner incident that "the system worked" was comically misguided, ranking up there with John Ashcroft's hastily called Moscow news conference in June 2002 to claim credit for breaking up the supposed "dirty bomb" plot of Jose Padilla. Still, Napolitano's gaffe pales in comparison to President Bush's post-Katrina ode to "Brownie" that "you doin' a heckuva job or dog-ate-my-homework claim, "I don't think anybody anticipated the breach of the levees."
According to ABC News, two Al Qaeda figures purportedly involved in the Northwest Airlines plot were released from Guantanamo Bay by the Bush administration in 2007. But given the GOP's full-court press to gain maximum political advantage from the near-disaster in Detroit, we're apparently supposed to forget that.
Just like that August 6, 2001 PDB that said, "Bin Laden Determined to Strike in U.S."
UPDATE: In light of Republican grandstanding, DailyKos has a look back at a vacationing President Bush's response to the failed "Shoe Bomber" attack.

19 comments on “For GOP, Short Memories on Terror Plots and Presidential Vacations”