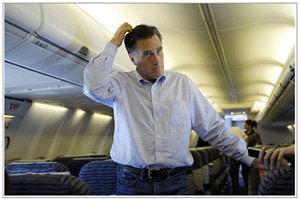 On Wednesday, Republican presidential nominee Mitt Romney will kick-off a six day swing through the UK, Israel and Poland. Like any challenger, Romney wants to burnish his foreign policy credentials while pandering to key voting blocs back home. But for the former Massachusetts governor, those rewards come with larger than usual risks. After all, with its recent criticism of President Obama in the German press, Team Romney has already jettisoned the old adage that "politics stops at the water's edge." Worse still, some horrible political optics, a host of past national security missteps and a foreign policy agenda devoid of details could turn Mitt Romney's excellent adventure into a minefield.
The problems start in London. With his visit to the Olympics, Romney hopes to remind Americans of his role in salvaging the 2002 Salt Lake City Winter Games. But as we learned Monday, how the self-proclaimed "Turnaround" artist did it will remain a mystery, as Romney's 2002 Olympic archives remain off-limits. And Romney, who Politico recently reported enjoys an 8-to-1 fundraising advantage on Wall Street, will be going for the gold in London just in time for what be the first arrests in the LIBOR rate-rigging scandal. As the New York Times reported last week, the Barclay's Boys just happen to be Mitt's money men in the UK:

The former chief executive and a top lobbyist for Barclays, the bank at the center of the scandal, helped organize a Romney fund-raiser. The former chief executive, Robert E. Diamond Jr., has since withdrawn his name as the event's co-host. The bank's lobbyist, Patrick J. Durkin, remains a co-chairman: he has bundled $1.1 million for Mr. Romney from friends and business associates, more than any other lobbyist, according to federal records.

By the time the $75,000-a-head events are over, the Republican may well see headlines like:

To show his national security chops, Mitt Romney could have instead traveled to the country where the United States is at war. But Afghanistan, too, is a major problem for Romney, and not just because he previously visited there in early 2011. After all, just last week one of Romney's advisers protested that "real Americans" aren't concerned about Afghanistan. And while the press for months has been clamoring for details on what Mitt would actually do about the conflict there, top GOP Senators including Lindsey Graham (R-C) and Jon Kyl (R-AZ) can't explain Romney's policy. Making matters worse, in the past Romney slammed President Obama's "inattention and dereliction" and asked "how in the world can the Commander in Chief sleep at night," despite having also declared that "we've learned that our troops shouldn't go off and try and fight a war of independence for another nation."
Then there's one other inconvenient truth: Osama Bin Laden.
In an interview with MSNBC's Chuck Todd, Romney announced that he now supports the operation that killed Bin Laden, the very kind of raid he once vehemently opposed. But years before Mitt claimed that "in a similar circumstance, I think other presidents and other candidates, like myself, would do exactly the same thing," Romney during his first White House run criticized Senator Barack Obama's call for unilateral American strikes against high-level Al Qaeda targets in Pakistan:

"I do not concur in the words of Barack Obama in a plan to enter an ally of ours... I don't think those kinds of comments help in this effort to draw more friends to our effort..."There is a war being waged by terrorists of different types and nature across the world," Romney said. "We want, as a civilized world, to participate with other nations in this civilized effort to help those nations reject the extreme with them."

To be sure, Mitt Romney will get a warmer welcome in Warsaw than in Kabul. After all, Romney has been very critical of President Obama's decision not to deploy elements of the U.S. missile defense system in Poland. (That move was very disappointing to the Polish government, if not the Polish people.) And while Romney was to quick make hay over Obama's unfortunate "death camp" remark, he's hoping to make fast friends with former Solidarity leader and Polish President Lech Walesa. And why not? After all, Walesa turned his back on Occupy Wall Street protestors, campaigned for Illinois Tea Party gubernatorial candidate Adam Andrzejewski, and in May urged the Polish government to beat Solidarity demonstrators:

The former president of Poland, Lech Walesa, said Wednesday that members of Solidarity, the trade union he once led, deserve to be beaten for a disruptive protest they staged last week in Warsaw.
Last week, Solidarity led a picket for days in front of Parliament to protest a law raising the retirement age. After the bill passed, enraged Solidarity activists prevented lawmakers from leaving, and a scuffle ensued.

Those words doubtless warmed the cockles of Mitt Romney's heart. Of course, this message from Romney in March will be music to the ears of many Poles, the anti-communist turned reactionary Lech Walesa among them:

"Russia is without question our number one geopolitical foe."

That probably came as a big of a surprise to Mitt's friends in Israel, where he will be lavished with praise and possibly campaign cash. After all, in his October 2009 piece, "Iran: Biggest Threat Since Soviets," Romney warned:

The Iranian leadership is the greatest immediate threat to the world since the fall of the Soviet Union, and before that, Nazi Germany...If we allow Iran under the rule of the mullahs to get a nuclear weapon, it will make the problems America faces today look like a walk in the park.

Si vis pacem, para bellum. That is a Latin phrase, but the ayatollahs will have no trouble understanding its meaning from a Romney administration: If you want peace, prepare for war.

That's the kind of talk Israeli Prime Minister Benjamin Netanyahu likes to hear and has come to expect from his former Boston Consulting Group colleague. Famously reticent to talk to the press, Mitt Romney has been only too happy to highlight his close friendship with the Israeli PM. "We can almost speak in shorthand," Romney told the New York Times in April, adding, "We share common experiences and have a perspective and underpinning which is similar."
Even if that perspective is not the policy of the United States government and even if it has gotten Mitt Romney in trouble in the past.
Consider Romney's 24 hour Iran disinvestment campaign in early 2007, an effort cut short by revelations his own former employer had recent business dealings with Tehran. Romney followed the lead Netanyahu, who was touring the U.S. calling for pension funds to unload any holdings in companies doing business with Iran. Romney began his own grandstanding on Iranian disinvestment the next month by targeting the Democratic-controlled states of New York and Massachusetts. On February 22, Romney sent letters to then New York Governor Eliot Spitzer, Senators Chuck Schumer and Hillary Clinton as well as state comptroller Thomas P. DiNapoli urging a policy of "strategic disinvestment from companies linked to the Iranian regime."
As it turns out, scrutiny begins at home. As the AP and others detailed, Romney's former employers and colleagues at Bain had links to very recent Iranian business deals. Caught flat-footed by his hypocrisy that took the AP less than a day to uncover, Romney feebly responded:

"This is something for now-forward. I wouldn't begin to say that people who, in the past, have been doing business with Iran, are subject to the same scrutiny as that which is going on from a prospective basis."

A similar if less embarrassing fate befell Romney's call for Iranian President Mahmoud Ahmadinejad to be indicted on war crimes charges by the United Nations.
In January 2007, Romney joined Netanyahu among the speakers at the Herzliya Conference. There, he first announced his support for Netanyahu's approach. Then in the fall of 2007, Romney took his case to the United Nations. He not only demanded the General Secretary Ban-Ki-Moon "to revoke any invitation to President Ahmadinejad to address the General Assembly," but insisted that the UN prosecute the Iranian President for his 2006 boast that he would "wipe Israel off the map."

"If President Ahmadinejad sets foot in the United States, he should be handed an indictment under the Genocide Convention."

That accounts for Mitt's passing comment during the November 22, 2011 CNN national security debate. When Romney said he wanted to "indict Ahmadinejad for violating the Geneva -- or the Genocide Convention," he was just awkwardly repeating an agenda Bibi has been pushing for years.
Pushing for years in the U.S., that is, without success. Last year, Mother Jones explained why. For starters, "U.S. policy has been to not honor the International Criminal Court; we are not a signatory to the Rome Treaty." In addition:

It's widely interpreted that a statement supposedly egging on genocide is not legally considered a tool of genocide, unless it can be taken into evidence as proving direct intent and premeditation. Furthermore, it would be unprecedented to indict a foreign leader for a genocide that hasn't even taken place yet.

Despite their joint failures, Bibi Netanyahu will greet his old friend with open arms. After all, many of Romney's advisers not only helped bring you the war in Iraq, but have for months been advocating an American attack on Iran "before it's too late."
Regardless, Mitt Romney may well get a bump in the polls after his new overseas journeys are complete. But his bellicose rhetoric towards Tehran, his incendiary words for Moscow and campaign cash from the LIBOR rate-riggers in London may sound very strange--and very disturbing--to Americans' ears. Or as Mitt Romney might describe his extraordinarily foreign policy, "so foreign to us we simply can't understand it."