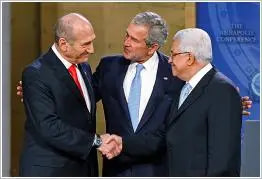 In January, George W. Bush famously predicted he would broker a Middle East peace by the end of his presidency. Now with Israel and Hamas on the brink of another confrontation in Gaza, Bush's pledge of a two-state solution is just the latest failure of his disastrous tenure in the White House.
Tensions between Israeli and Hamas forces have been escalating since the expiration last week of a six-month truce negotiated by Egypt. The retaliatory tit-for-tat has included Israeli strikes against militants in Gaza, and Hamas firing rockets and mortars into Israel. And while Israel reopened border crossings Friday for deliveries of food, supplies and humanitarian aid, the AP reported that the government of Prime Minister Ehud Olmert "wrapped up preparations for a broad offensive."
On Thursday, the scandal-plagued outgoing Prime Minister issued a warning to Palestinians in Gaza. As Reuters recounted:

"I didn't come here to declare war," Mr. Olmert told Al Arabiya, an Arab broadcaster widely watched in Gaza. "But Hamas must be stopped - that is the way it is going to be."

He issued what amounted to a public call to Gazans to overthrow Hamas, the Islamic group that controls the territory. "I'm telling them now," he said. "It may be the last minute. There will be more blood there. Who wants it? We don't want it."

That kind of rhetoric hardly suggests an imminent breakthrough in Israeli-Palestinian relations during the 25 days remaining in the Bush presidency. Which is exactly what President Bush promised 11 months ago.
After years of malign neglect regarding the simmering Israeli-Palestinian conflict, President Bush launched his renewed peace effort at the November 2007 Annapolis conference. During a subsequent meeting on January 11, 2008 with Palestinian President Mahmoud Abbas, Bush made his pledge of a signed agreement during his presidency:

"I believe it's going to happen, that there will be a signed peace treaty by the time I leave office...I'm on a timetable. I've got 12 months."

President Bush's unshakable confidence continued through the next round of talks in May. In an interview with Al-Arabiya television, President Bush doubled-down on his earlier bet. Asked if an agreement can still be reached by the time he departs the White House, he repeated his pledge:

"Yes, I think so. That's what I'm aiming for, absolutely. We're pushing hard.''

President Bush might have wanted to first check in with his Secretary of State Condoleezza Rice. On April 29, Rice tried to reset expectations, telling an American Jewish audience that "we have a chance to reach the basic contours of a settlement by the end of the year." Bush himself briefly signaled a retreat during an April 24th meeting with Palestinian President Mahmoud Abbas, lowering his goal from a peace treaty, "I'm confident we can achieve the definition of a state." And during a press conference five days later, Bush remained ebullient about what then seemed to be more modest goals:

"I'm still hopeful we'll get an agreement by the end of my presidency. Condi is heading back out there. I've been in touch with President Abbas here in the Oval Office, and I talk to Prime Minister Olmert, and the attitude is good. People do understand the importance of getting a state defined."

Alas, President Bush's perpetually sunny disposition seems disconnected from events on the ground. Even amid the chaos and carnage in March as Israeli forces and Hamas forces battled in Gaza, Bush announced, "I'm still as optimistic as I was after Annapolis." By May, the prospects seemed bleaker still, with Abbas still mired in Fatah's power struggle with Hamas and Israeli Prime Minister Olmert gravely weakened by the mushrooming corruption scandal enveloping his government. In an interview on May 13 with the Israeli paper Ha'aretz, Bush made it clear he was undeterred:

Q: Mr. President, Prime Minister Olmert is under a corruption probe and is basically almost on the verge of being forced out from office. And his counterpart, Abu Abbas, is also very weak. So really the question is, do you still think that you can achieve peace until the end of 2008?
THE PRESIDENT: I do, yes.

Even though talks between Olmert and Abbas continued behind the scenes, the environment was not a promising one. As Jon Alterman, director of the Middle East program at the Center for Strategic and International Studies (CSIS), recently put it:

"It's hard to remember a less auspicious time to pursue Arab-Israeli peacemaking than right now. The politics on the ground are absolutely miserable."

For her part, Secretary of State Rice finally put an end to Bush's wishful thinking on December 15. After a meeting of the diplomatic Quartet of Mideast peacemakers - the U.S., the U.N., the European Union and Russia - held at the United Nations, Rice announced:

Time will tell. Olmert, like Bush, is on his way out of office. (A victory in the February elections by Likud's Benjamin Netanyahu over Foreign Minister Tzipi Livni and Defense Minister Ehud Barak would almost certainly bring a harder line from the Israeli government). Regardless, the Israeli-Palestinian impasse is just another in George W. Bush's litany of failures - and yet another mess Barack Obama will have to clean up.
UPDATE: As predicted, Israel launched strikes against Hamas targets in Gaza on Saturday. Initial reports claim over 200 have been killed so far.