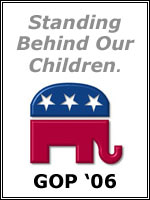 While the past week may not have been kind to the Republican Party, the events of the last several days need not spell doom for the GOP during the upcoming mid-term elections. After all, Karl Rove, Ken Mehlman and the Republican braintrust will not allow the Foley scandal, the explosive allegations in the new Bob Woodward book, the latest Abramoff developments or the downward spiral in Iraq to redefine the GOP.
To help the Republicans extricate themselves from their current quandary, here some ads for the GOP we'd like to see:

For reader suggestions on what "GOP" now stands for, visit the Perrspectives "Define GOP Contest."