Last year, Republicans successfully waged a scorched-earth campaign to preserve at all costs the Bush tax cuts for the richest two percent of Americans. Back then, Arizona Senator Jon Kyl defended the Treasury-draining, $70 billion a year windfall for the wealthy by proclaiming, "you should never have to offset the cost of a deliberate decision to reduce tax rates on Americans."

Of course, when the tax cut extension is proposed by a Democrat and the beneficiaries middle class Americans, the GOP's magic talking points about "tax cuts pay for themselves" and "you cut taxes and tax revenues increase" and there's no cost "when people are allowed to keep their own money" magically disappear. Now under overwhelming public pressure to renew the payroll tax reduction, recalcitrant Republicans are demanding it paid for by slashing the already historically small federal workforce.
Kyl, the second-ranking Senate Republican, announced last weekend he would oppose the extension of the payroll tax cut. (Unsurprisingly, tax cut crusader Grover Norquist told House Republicans Thursday that a failure to extend the payroll tax cut should not be viewed as raising taxes.) But bowing to political reality, Senate Minority Leader Mitch McConnell (who last year declared "what Senator Kyl was expressing was the view of virtually every Republican on that subject" of not offsetting tax cuts) overrode his deputy's objections by declaring:

Just not by asking 345,000 millionaires to pay a 3.2 percent surtax so 113,000,000 working households can continue to get cut in their payroll taxes. Instead of a modest tax increase affecting only 1 percent of small business owners (employers who under the Democratic proposal would also see their contribution to the payroll tax cut), Republicans want the poor, the elderly and, above all, federal employees to pick up the tab. As the New York Times summed up the GOP offer rejected by the Senate on Thursday:

Senate Republican leaders introduced a bill that would keep the payroll tax rate at its current level for another year. The cost is roughly $120 billion. Senate Republicans would offset most of the cost by freezing the pay of federal employees through 2015 and gradually reducing the federal work force by 10 percent.
In addition, Senate Republican leaders would go after "millionaires and billionaires," not by raising their taxes but by making them ineligible for unemployment compensation and food stamps and increasing their Medicare premiums. Democrats said that this part of the Republican proposal was not serious, pointing out that high earners were already ineligible to receive food stamps.

Leaving aside the comic relief in denying food stamps to millionaires, the Republican scheme advances their perpetual quest to target public employees. As Politico reported:

Having little taste for Democrats' plan to hike taxes on the rich, Republicans on Wednesday offered a new way to pay for an extension to the payroll tax cut: Keep federal salaries -- even for lawmakers -- in their deep freeze.
President Barack Obama instituted a two-year federal pay freeze that began Jan. 1. Republicans would like to extend the freeze for three more years and cut the federal workforce by 10 percent, or 200,000 employees, by 2015...
"It's the idea that private-sector employees around the country have had a pay freeze. Many have been laid off," said one GOP senator. "And at the federal level, the salary relative to private-sector salaries has crept up."

Of course, there are a couple of minor problems with the Republican plan to punish public employees and their unions. Despite the GOP myth-making, it turns out that federal workers not only make less than their private sector counterparts, but there are already fewer of them relative to the U.S. population than in decades.
As the Washington Post reported last month, the large and growing pay gap runs the other way:

The federal government reported Friday that on average its employees are underpaid by 26.3 percent when compared with similar non-federal jobs, a "pay gap" that increased by about 2 percentage points over the last year while federal salary rates were frozen.

As in the previous assessments of the numbers presented to the Federal Salary Council, federal workers are paid less than their counterparts in the30-plus metropolitan area surveyed, as well as the catch-all "rest of the US" (RUS):

That persistent and growing gap hasn't prevented Republican mythmakers from claiming exactly the opposite. Consider, for example, the "2 to 1" claim now dominating the U.S media:

But as with state and local governments, this line of attack is an apples-to-oranges comparison at best and an outright deception at worst. As FactCheck pointed out:

The analysis is based on data from the Bureau of Economic Analysis and crudely done by dividing total compensation (salary and benefits) by the number of current federal civilian employees. Comparing such averages is quite misleading, for two reasons:
First, BEA says the figure is inflated by including compensation that is actually paid to benefit retirees, not just for current workers. The figure is at least several thousand dollars too high, by our calculations.
Second, the average federal civilian worker is better educated, more experienced and more likely to have management or professional responsibilities than the average private worker.

Over 44% of federal employees have a college degree, compared to about 19% of private sector workers. More importantly, an assessment of salaries (excluding benefits) by the Office of Personnel Management found that on average comparable federal civilian workers are paid 22 percent less than private workers. The disparities, even including incentive pay, are even greater in some metropolitan areas:

It is worth noting, as FactCheck does, that there are limitations to the OPM data. Not only are benefits not included, but the benchmarking methodology makes direct public/private section comparisons difficult. But as Sheldon Friedman, the chairman of the Federal Prevailing Rate Advisory Committee, pointed out last year, the absence of the apples-to-apples comparisons for health care and retirement benefits doesn't alter the larger conclusion:

"Certainly it is true on average the benefits in the federal government are superior to the average for the private sector workforce, but that workforce include many millions who probably have no benefits whatsoever," said Friedman. "If you are comparing an engineer at a GS-12 or 13 in the federal government with their counterpart with Boeing or any other private company, I would guess the benefits aren't that different. But we really don't know."

Regardless, Mitt Romney like the party he would lead wants to take an ax to federal employees' compensation and, it turns out, the workers themselves. As Romney proposed last month:

Reduce The Federal Workforce By 10 Percent Via Attrition -- Savings: $4 Billion. Despite widespread layoffs in the private sector, President Obama has continued to grow the federal payrolls. The federal workforce can be reduced by 10 percent through a "1-for-2" system of attrition, thereby reducing the number of federal employees while allowing the introduction of new talent into the federal service.

Again, Mitt Romney's central claim is a false one. As the chart from the St. Louis Fed shows, federal government employment has been essentially unchanged under President Obama. (Ironically, Bill Clinton reduced Uncle Sam's workforce dramatically after the ballooning of the Reagan years.) 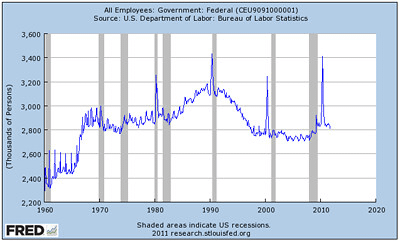 As it turns out, the federal civilian workforce is not only smaller now than during Ronald Reagan's supposed heyday of small government; as a percentage of the U.S. population, federal employment is near 50 year lows:

As it turns out, Romney's straw-man is just a slightly less deceptive version than the one his former presidential rival turned endorser Tim Pawlenty offered in December:

It's with good reason Politifact branded Pawlenty's fabrication a "Pants On Fire" lie. With the temporary surge for the 2010 U.S. Census long since over, by the end of the 2010 the federal government's payroll had grown by a miniscule 34,000 over three years. Meanwhile, state and local governments have shed over 600,000 jobs since the recession started. (Nevertheless, conservative columnist George Will deemed the latest public sector job losses "good" while Republican Senate Minority Leader Mitch McConnell called them a "local" problem.)
Also largely lost in this discussion, as the Washington Post noted, is that "smaller government isn't always cheaper." A GAO study of the 25 percent reduction in defense procurement staffing found that "the cost overrun on the average weapons system went from 6 percent in 2000 to 25 percent in 2009." Just as damning:

In a different vein, if the federal government does slice down its workforce, it's likely to carry out more tasks via private contractor. For a long time, this was thought to save money, on the notion that workers in the private sector make less than government workers with inflated salaries. But this assumption turns out to be awry. In September, a study from the Project on Government Oversight found that private contractors tend to make 83 percent more, on average, then federal employees get paid to do comparable tasks.

For his part, Speaker John Boehner has announced he would support McConnell's effort, despite planning to offer his own version in the House. After all, Boehner is eager to show that "we Republicans do care about people" even while acknowledging "I'm not an economist." As for the 200,000 plus federal workers Republicans would cut from the payrolls in order to pay for their version of the payroll tax cut extension, Boehner made clear where he stood in February.