So the GOP's petulance has come to this. Opposition by House Republicans to any payroll tax cut extension began to fade last week only after President Obama issued a veto threat against a GOP bill tying the continued relief for working Americans to approval of the controversial Keystone XL pipeline project. The difference, Rep, Jeff Flake (R-AZ) explained, "was the president and that threat."
But if the House Republican bill jeopardized $1,000 tax cut in 2012 for a family earning $50,000 by introducing one poison pill the Senate and the White House are certain to reject, others would bring pain and suffering in their own districts back home. As it turns out, House GOP plan to fund the payroll tax break by dramatically cutting back on long-term unemployment benefits hits the states with the greatest joblessness - many of them solidly red - the hardest.
On Tuesday, the House of Representatives will vote on the Republican payroll tax proposal Speaker John Boehner called a "no brainer." Echoing Flake, Republican Study Committee chairman Jim Jordan of Ohio announced, "The fact that the president doesn't like it makes me like it even more."
As MSNBC reported, Republicans in the states with the highest unemployment might want to think again:

Time is running out for Congress to renew extended unemployment benefits for millions of American workers out of a job. If the latest GOP proposal is enacted, time will also run out a lot sooner for the checks workers collect for extended jobless insurance benefits.
Workers in states with the worst job markets would be hit hardest under the GOP plan, which would shorten the maximum length of time a worker can collect benefits. 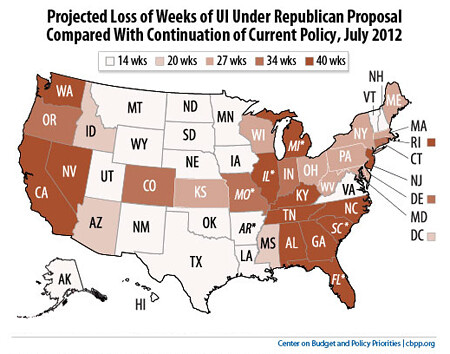 The Center on Budget and Policy Priorities explained why:

The House Republican proposal -- part of their larger proposal to extend the payroll tax cut and UI benefits -- would slash, by 40, the number of weeks potentially available to unemployed workers who are struggling to find a job in some states that were hit the hardest by the jobs slump (see map). That greatly raises the risk that unemployed workers will run out of UI benefits before they find another job, imposing even greater hardship on them and their families. It also reduces the amount of support that UI -- one of our highest-bang-for-the-buck stimulus programs -- can provide for the struggling recovery. And, to add insult to injury, the Republican proposal contains onerous requirements on qualified UI applicants, such as drug tests and requirements to hold or be working toward a GED, that would make it harder for them to receive benefits at all...
Under the Republican proposal, workers who exhaust their 26 weeks of regular UI early next year would be eligible for up to 20 additional weeks of federal emergency UI in all states. In states with an unemployment rate of 6 percent or higher, there would be up to another 13 weeks available, but in most of them that would be it. Many unemployed workers now receiving emergency federal benefits would experience a premature cutoff next year compared with current policy. The biggest cuts would come in states with the highest unemployment rates.

And increasingly, those states are found in the solidly Republican south. 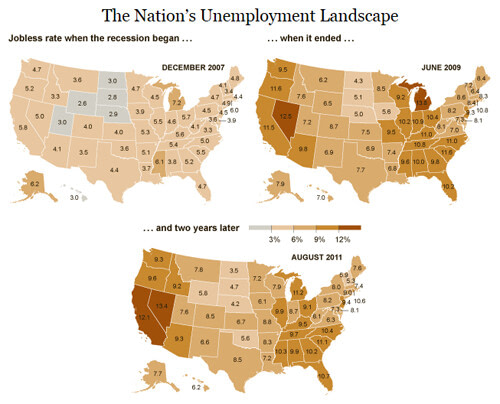 While California, Nevada, Illinois and Michigan still rank near the top in unemployment, the New York Times recently warned that, "The once-booming South, which entered the recession with the lowest unemployment rate in the nation, is now struggling with some of the highest rates." That shift, the Times noted, has dramatically altered the map of joblessness:

Several Southern states -- including South Carolina, whose 11.1 percent unemployment rate is the fourth highest in the nation -- have higher unemployment rates than they did a year ago. Unemployment in the South is now higher than it is in the Northeast and the Midwest, which include Rust Belt states that were struggling even before the recession.

The economic hardship which would result by the GOP's "99 to 59" plan is clear. As CBPP noted, "The Republican UI proposal would provide over $10 billion less support for the recovery and impose needless hardship on the long-term unemployed who are struggling to find a job in an economy in which there are still four times as many people looking for work as there are job openings." Those steep cuts to the $45 billion program would come at a time when long-term joblessness is at its highest in generations:

But because Republicans refuse to countenance a modest 1.9 percent surtax on 345,000 millionaires to fund the payroll tax cut extension for 113,000,000 American households (or to follow their own rule that "you should never have to offset the cost of a deliberate decision to reduce tax rates on Americans"), millions of unemployed Americans would instead pay the price. And increasingly, they call Red State America home.