Despite a decade of Bush tax cut windfalls for the wealthy pushing income inequality to levels not seen since 1929, Republicans are calling for another $700 billion, 10-year payday for the richest Americans. So it should come as no surprise that as corporate profits reached an all-time record in the third quarter, leading voices in the Republican Party want their tax bill slashed, too.
As the New York Times reported Tuesday, happy days are indeed here again for corporate America:

"American businesses earned profits at an annual rate of $1.659 trillion in the third quarter, according to a Commerce Department report released Tuesday. That is the highest figure recorded since the government began keeping track over 60 years ago, at least in nominal or noninflation-adjusted terms."

Those numbers should be taken with a grain of salt. Having slashed costs and reaped the benefits of big productivity gains at this early stage of the recovery, U.S. firms are sitting on a mountain of cash. But even expressed as a percentage of American gross domestic product, corporate profits are returning to the 9.5% range enjoyed in 2006: 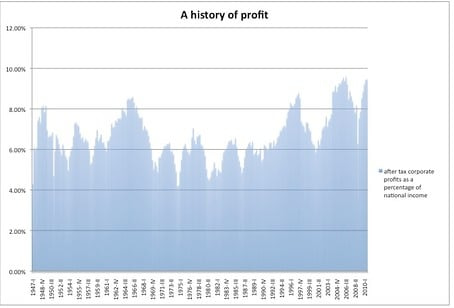 Nevertheless, the leading lights of the Republican Party are calling for a rollback in corporate tax rates.
Last week, Texas Congressman and terror baby foe Louie Gohmert decried the "insidious" tax of American business and demanded its abolition. Earlier this year, future GOP White House hopeful Newt Gingrich proposed cutting the corporate tax rate from 35% to 12.5%, the same level as in the multinational haven of Ireland. And as ThinkProgress reported, Gingrich and Gohmert have plenty of company:

Gohmert's defense of corporations are not the words of a single rogue congressman. Rather, sticking up for the big guy is an orthodoxy that pervades the Republican Party and the conservative movement. Newly-elected Gov. Scott Walker (R) of Wisconsin has pledged to repeal the state's corporate income tax. Sen.-elect Marco Rubio (R-FL) wants to slash the federal corporate income tax. And Rep. Paul Ryan (R-WI) proposes completely eliminating the tax in his radical Roadmap for America.

Of course, Republican mythmaking obscures both the real tax burden and true global competitive environment for U.S. firms. Myriad loopholes dramatically lower the effective U.S. corporate tax rate. Google, for example, paid a paltry 2.4% tax rate, costing the U.S. Treasury billions. General Electric not avoided paying taxes altogether last year; it actually record a $1.1 billion tax benefit.
While the effective U.S. corporate rate at 25.3% remains higher than most developed countries, its contribution to federal revenue is shrinking. As CBPP noted, an analysis by the Congressional Research Service showed U.S. corporations paid than 49 percent in the 1950s, 38 percent in the 1960s, and 33 percent in the 1970s. And the total bill for corporate taxes has dropped to only about 10% of federal revenue. Combined federal and state corporate taxes now represent just 2.1% of American GDP, combined to an average of 3.4% among OECD members. As ThinkProgress explained, on that scorecard "American corporations actually already pay far less in taxes than those in other industrialized nations."

Total federal taxes as a percentage of GDP have remained roughly 20% since the 1950's. But as Tom Schaller at FiveThirtyEight explained using data and a helpful chart from the Tax Policy Center, the contribution of corporate tax revenue has plummeted:

Income taxes as a share of GDP have held steady during the same time period. Corporate and excise taxes, paid mostly by businesses and which conservatives complain are inefficient and simply passed through to consumers anyway, have gone down as a share of that 20 percent. What's gone up are payroll taxes which fund programs like Medicare and Social Security that the same tea partiers were warning Obama and congressional Democrats not to touch in the same breath they were complaining about the socialist expansion of the healthcare system.

As the picture reveals, corporate tax revenue as a percentage of GDP has plunged by roughly two-thirds since 1950: 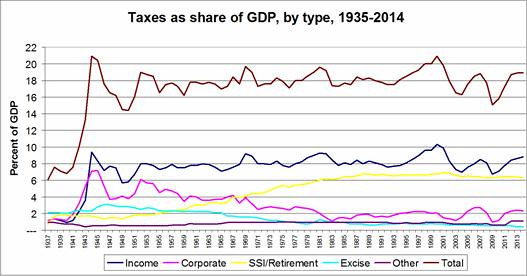 As Ezra Klein explained in the Washington Post in September, despite our higher effective corporate tax rates, "If you actually look at the amount of money our corporate tax raises, we're about one standard deviation beneath the OECD average." Why?

The reason is simple enough: Our corporate tax code is complicated. A lot of businesses, like S-corporations and partnerships, don't pay corporate taxes. Others use loopholes and exemptions and deductions to push their actual rate way down. We could have a simpler code with lower rates that would raise more money.

Or as Klein lamented in April:

The U.S. corporate tax rate really is (pdf) larger than in most developed countries, even as revenues are considerably lower and shrinking. But that doesn't suggest that a simple cut in the corporate income tax would bring back this revenue. If these companies have developed practices for sheltering income overseas, what's to say they won't continue to do so even after the tax rate is cut, meaning that revenue would actually fall? The Wyden-Gregg reform package takes the right approach, lowering the rate at the same time as it subjects foreign profits to the tax. This makes evasion both harder and less attractive.

In the mean time, the new Republican majority continues to push for more tax breaks for their corporate constituents on Wall Street. Which is altogether fitting. Even as the GOP calls to extend the Bush tax cuts for the richest 2% of Americans, the barons of Wall Street have returned to their opulent ways. And as it turns out, their firms are the very ones piling up the biggest profits right now. As Justin Fox via Ezra Klein explains, not all corporations are pulling in near-record profits:

So the reason that corporate profits are near their all-time highs would appear to be that financial corporations (mainly big financial corporations) and multinationals are making lots of money and paying less of it out in taxes. Hmmmm.
The corporate profit picture would seem to mirror what's been going on in income distribution for individuals for the past few decades. The money is increasingly going to a select group at the very top of the economic food chain, who are able to reap the rewards of global growth, play the financial system astutely, and avoid taxes.