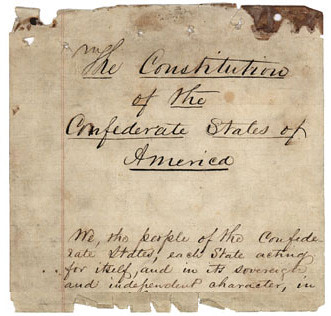 President Obama's gun control proposals have predictably--and disturbingly--spawned protests with names like "Gun Appreciation Day" and the February 23rd "Day of Resistance." But with their bills calling for the nullification of new national gun laws and the imprisonment of federal officials enforcing them, some supposed defenders of the Second Amendment have apparently confused the Confederate Constitution with our own.
The Article VI Supremacy Clause is unambiguous in stating that the Constitution, laws and treaties of the United States "shall be the supreme Law of the Land." Nevertheless, Tea Party inspired Republicans did not read the document they claim to love. As ABC News explained:

From the Mississippi governor to lawmakers in Texas, Missouri and Wyoming, even local sheriffs in Oregon and Kentucky, many of those who oppose the president's proposal believe it is within their legal right to not only refuse to enforce federal legislation, but to make it a crime for a federal agent to try and enforce the law in their states.

Despite near-universal condemnation from legal scholars calling their proposed state statutes "outrageously unenforceable" and "pure political theater," Republicans in Arizona and Texas are advocating for "gun secession bills" nullifying federal laws and making their enforcement within state lines a felony. Encouraged by Governor Phil Bryant, Mississippi Republican state Reps. Gary Chism and Jeff Smith filed a bill this month to form a "Joint Legislative Committee on the Neutralization of Federal Laws." The Mississippi Balance of Powers Act reads in part:

But while these and other Republicans claim the Tenth Amendment is the basis for their ridiculous assertions of state sovereignty, their real inspiration seems to come from the Constitution of the Confederate States of America.
In most respects, the CSA Constitution is nearly identical to the American one, even including its own Supremacy Clause. Otherwise, that document produced by rebels and traitors was one only a Tea Partier could love:

Language promoting "the general welfare" was omitted, while the right to own slaves was explicitly guaranteed although foreign slave trade was forbidden).
The president, serving a single six-year term, was given line-item veto power over the budget, and his cabinet awarded nonvoting seats in Congress. To guarantee Southerners their much-desired states' rights, the federal government had no authority to levy protective tariffs, make internal improvements, or overrule state court decisions, while states had the right to sustain their own armies and enter into separate agreements with one another, and were given greater power in amending the constitution.

That's not all. Starting with its Preamble, it is the CSA Constitution which seems to provide talking points for today's Republican gun control foes:

We, the people of the Confederate States, each State acting in its sovereign and independent character, in order to form a permanent federal government, establish justice, insure domestic tranquillity, and secure the blessings of liberty to ourselves and our posterity invoking the favor and guidance of Almighty God do ordain and establish this Constitution for the Confederate States of America.

And in the Article I, Section 2 of the Confederate Constitution, supposed Second Amendment defenders can find the grounds for removing federal judges and officials in their respective states:

The House of Representatives shall choose their Speaker and other officers; and shall have the sole power of impeachment; except that any judicial or other Federal officer, resident and acting solely within the limits of any State, may be impeached by a vote of two-thirds of both branches of the Legislature thereof.

But Republican opponents of the President's common sense--and popular--proposals to curb violence don't need to take his word for it that their schemes are suspect under the United States Constitution. As Justice Antonin Scalia explained during their last bout of secessionitis over what became the Affordable Care Act, "If there was any constitutional issue resolved by the Civil War, it is that there is no right to secede." And as the New York Times reported in December, Scalia in his majority opinion in the Heller case made clear that a wide range of firearms regulations would still pass constitutional muster:

Still, the decision also contained a long list of laws and regulations that would, the court said, be unaffected. Among them were "laws forbidding the carrying of firearms in sensitive places such as schools."
"Nothing in our opinion should be taken to cast doubt on longstanding prohibitions on the possession of firearms by felons and the mentally ill," Justice Scalia wrote. Government buildings in general could still ban guns. And the court said it had no quarrel with "laws imposing conditions and qualifications on the commercial sale of arms."
Justice Scalia added that laws banning "dangerous and unusual weapons" are "another important limitation on the right to keep and carry arms." He gave an example: "M-16 rifles and the like."
When the case was argued in 2008, Justice Scalia suggested that other kinds of weapons and ammunition could be regulated. "I don't know that a lot of people have machine guns or armor-piercing bullets," he said. "I think that's quite unusual."