What happens when clinics providing healthcare services to women close? Among other things, American women will needlessly die. That's the horrifying conclusion from a recent study published in the International Journal of Radiation Oncology. Designed to gauge the impact of the closures of 100 women's health clinics nationwide between 2010 and 2013, Dr. Amar Srivastava of the Washington University School of Medicine in St. Louis and the research team discovered that fewer women were screened for cervical cancer, that more women were diagnosed with advanced stages of the disease, and disease mortality rates rose. 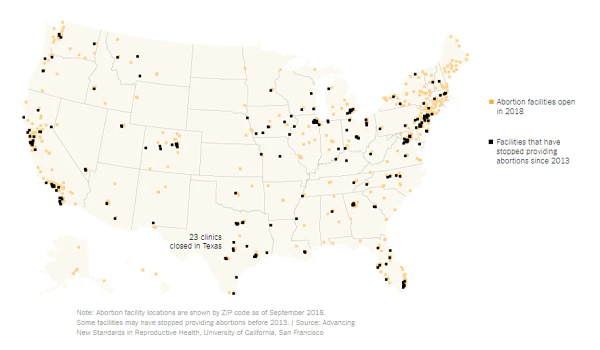 If there is any silver lining in the aftermath of the analysis, it can be found in the Affordable Care Act (a.k.a. Obamacare) and its reduction of the uninsured rate from nearly 16% to 8.5% in 2018, according to the U.S. Census. (That figure represents a 0.6-point increase from 2017, a jump wholly due to President Trump's sabotage of the ACA.) But thanks to the Trump administration and its Republican allies in the states, all of the trends regarding women's health care are being pushed in the wrong direction. Even as the birth rate and the abortion rate continue to decline, the health and lives of more women will be put at risk.
Continue reading at Daily Kos.