As Barack Obama marks his seventh year in office, the resurgent American economy is posing a major problem for his Republican detractors. After years of denouncing the President's supposed "out of control spending", "job-crushing taxes" and "job-killing Obamacare," the pathetic GOP claim that Obama "made the economy worse" can't pass the laugh test. After all, the unemployment rate has been cut in half during his tenure as the private sector added jobs for a record 70 straight months. New jobless claims have dropped to their lowest level since 2007 while workers' ability to voluntarily switch jobs has increased. Even with its recent buffeting from China and the plummeting price of oil, the Dow Jones has doubled. All the while, the annual budget deficit has been slashed by two-thirds and inflation-adjusted federal spending has been lower than the day Barack Obama first took the oath of office. 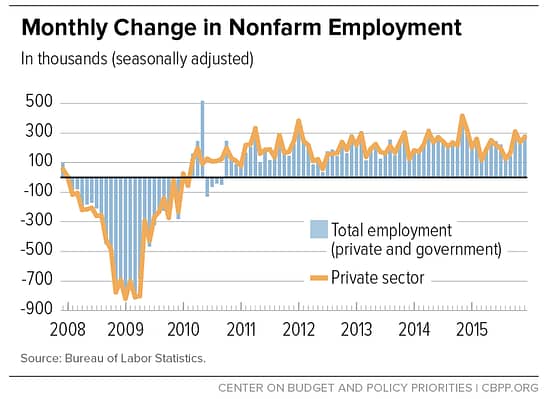 In response, conservatives can only resort to what they always do: give credit to someone else and declare that Ronald Reagan would have done better. New House Speaker Paul Ryan (R-WI) comically "argued that the Federal Reserve's policies pushed the recovery," despite having opposed them at every turn. Meanwhile, Powerline's John Hinderaker, previously best known for his 2005 assertion that President Bush was "a man of extraordinary vision and brilliance approaching to genius" like "like a great painter or musician who is ahead of his time," protested:

So don't let anyone fool you about the economy of the last seven years. Barack Obama was set up for success, as he took office on the heels of a sharp economic downturn that had a limited, specific cause. The economy should have come roaring back as it did under Ronald Reagan, only if anything even more so, since the government errors that gave rise to the 2008 financial collapse were relatively easy to correct. Instead, the Democrats' left-wing policies inhibited economic growth and produced the worst recovery of modern times.

Ryan and Hinderaker aren't merely wrong about the worst economic cataclysm to befall the United States since the Great Depression, but on the tools available to recover from it. Reagan massively increased federal spending even as state and local governments did the same. Meanwhile, Paul Volcker's Fed slashed interest rates to jump start the economy. Even as GDP was contracting by almost 10 percent as he was inaugurated, President Obama could avail himself of neither: Interest rates were already near zero and draconian spending cuts by states and localities created a drag that exceeded the size of his $800 billion stimulus.
Oh, and one other thing. From literally the night he was sworn in, Obama's Republican opponents engaged in an unprecedented campaign of sabotage designed to derail the economic recovery and his presidency. They didn't just oppose the stimulus (over 40 percent of which was comprised of tax cuts), but the Fed's quantitative easing program and the White House's auto bailout which saved Detroit--and millions of jobs--as well. Not to content to rest there, Republican leaders threatened to trigger a default by the United States by refusing to raise the debt ceiling, something they had routinely done 17 times for Reagan and 7 more for George W. Bush.
Continue reading at Daily Kos.