How to Make the Stem Cell Bill Veto-Proof 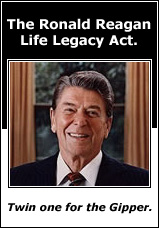 Just two days after the third anniversary of the death of Ronald Reagan, the House of Representatives overwhelmingly passed a bill easing restrictions on stem cell research favored by his family. But with President Bush promising to once again veto what he called "a recycled old bill," Democrats will need a new strategy to win one for the Gipper. As I wrote back in April, all the stem cell bill needs is a name change - and a little help from Ronald Reagan himself.
The failure to override President Bush's veto in 2006 shows that broad bipartisan backing in Congress, aggressive action in the states and the overwhelming support of the American people are not enough. To overcome White House intransigence that is crippling American leadership in finding potential life-saving treatments through stem cell research, another tack is needed.
Which is where Ronald Reagan and a little creative marketing come in.
Harry Reid should simply change the name of his bill from "Stem Cell Research Enhancement Act of 2007" to the "Ronald Reagan Life Legacy Act of 2007." By taking a page from the Republican handbook, Democrats can use dictate the terms of debate through branding alone.
As I first suggested back in 2005, a renamed "Ronald Reagan Life Legacy Act" would fundamentally transform the politics surrounding the stem cell issue. It's not merely that Nancy Reagan and family would renew their high profile public support. Social conservatives who bow down before the altar of Reagan would be forced to vote against his memory. GOP presidential aspirants hoping to claim the Gipper's mantle would face the stark choice between battling Reagan's disease or battling his wife. Bush NIH director Dr. Elias Zerhouni surely wouldn't be the only one to crack under the public pressure and emerging scientific consensus.
So Democrats, make President Bush and his remaining allies choose. You're either with Ronald Reagan or you're against him.