Intensity vs. Propensity in the 2010 Campaign

This week has brought a mixed bag for Democrats anxious about the party's prospects for the 2010 midterm elections. Gallup reported a marked shrinkage in the "enthusiasm gap," as the GOP's edge in "very enthusiastic" voters dropped by half since early April/ But as Hotline reported, Democratic turnout in Tuesday's primaries fell "off a cliff," an ominous sign given the virulent anti-incumbent fever sweeping the electorate.
But the real danger for Democrats may not be the flagging enthusiasm of their supporters overall, but an "intensity gap" on the issues which may well determine turnout. That is, in low turnout midterm elections, how strongly one side feels about an issue may be more important than what a majority of Americans believe overall. And that difference, call it intensity vs. propensity, doesn't bode well for Democrats. 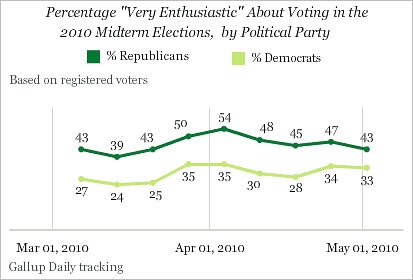 Consider, for example, health care. In its March and April surveys, the Kaiser Family Foundation found a narrow majority in favor of the Obama health care reform and strong support for individual provisions in the new law. But as Mark Blumenthal noted in the National Journal three weeks ago:

Among all adults, 46 percent said they "generally support" the "the health care proposals being discussed in Congress" and 42 percent said they "generally oppose." But as the following chart shows, the numbers flipped among the 80 percent who said they were registered to vote: 43 percent favor, 46 percent oppose.
The Kaiser poll also included a question about past voting in midterm elections, and when we used that to narrow the sample to the 41 percent who said they "always vote," opposition to health reform increased to 51 percent and support fell to 41 percent. 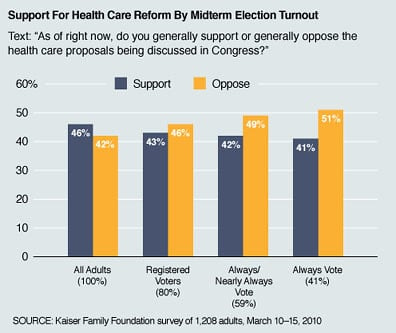 Complicating matters further, as both Kaiser and a recent Deloitte study confirmed, is the public's continued confusion over the bill itself. While the Deloitte survey showed strong support for key provisions (including 69% approval of the public option which was excluded), it found "mixed and sometimes inconsistent attitudes" about the law. As Kaiser President and CEO Drew Altman put it:

"People are struggling to understand how the law will affect them and their families and to separate fact from political spin."

And that demagoguery-aided confusion works to the Republicans' advantage. Even though independents strongly reject the GOP's "repeal and replace" health care slogan (backed by 67% of Republicans surveyed but only 36% of independents), its Tea Party base is fired up. Among senior citizens, the only age group to back John McCain in 2008, misplaced fear and loathing of the Democratic health care reform runs strong. And the elderly vote. The one saving grace for Democrats? According to Gallup, self-identified Republicans view health care as a much lower priority than Democrats, an issue which lags the economy and unemployment for both.
Then there's the incendiary issue of immigration. While it hardly registered on the Gallup poll of priorities a month ago, the issue holds a unique grip over Republican politics. As I noted after the Iowa caucuses in January 2008, heading into the GOP presidential primaries, it was the number one issue for Republican voters:

According to the MSNBC entrance polls, Democratic caucus goers saw the economy as their most important issue. While the economy tied Iraq 35% to top Democrats' priorities, health care was just behind at 27%. Those results mirrored the findings of a CBS/New York Times survey in early December which put Iraq (25%), the economy/jobs (12%) and health care at the top of Americans nationwide. An NBC News/Wall Street Journal poll the following week showed a similar ranking of Americans' concerns.
Republicans in Iowa, however, had a much different notion of national priorities. Immigration easily tops the list of Hawkeye State Republican anxieties. 33% of GOP caucus participants claimed immigration was their most important issue, followed by the economy (26%), terrorism (21%) and Iraq (17%)...While immigration ranks a distant fourth (or lower) for Americans as a whole, for Iowa Republicans it was job 1.

Now with the contentious response to the draconian immigration law in Arizona, immigration may once again have the xenophobic base of the GOP fired up and ready to go. A CBS/New York Times poll this week found that a 51% majority of Americans overall felt Arizona it "about right" with its new papers-please law. But the split by party and geography was stunning. As CBS noted:

Two in three Republicans say the law takes the right approach, along with roughly half of independents. Among Democrats, support for the law stands at 38 percent. Americans living in the South and Midwest are more likely than those in the East or West to support the measure.

And while the alienation of the rapidly growing block of Hispanic voters potentially presents a long-terms demographic disaster in the GOP, in the near term the immigration issue could pay dividends for Republicans. As Politico suggested:

In the South and Midwest, where some of the most competitive congressional races will be fought, popular sentiment is overwhelmingly in favor of the controversial new law.
According to a New York Times/CBS poll released Monday, 69 percent of respondents from the South said that the law is either "about right" or does not go "far enough" and 66 percent from the Midwest said the same. Opinion is more divided in the Northeast and West, but nationwide, 60 percent of respondents said the Arizona measure is about right or doesn't go far enough.

Democrats can take some comfort that 64% of respondents favored a path to citizenship (43%) or a guest worker program (21%), numbers which suggest general support their new immigration reform plan. But despite the public's overall support for "legalization" (though not "amnesty"), failure to deliver on it could results in Democratic Hispanic voters staying home in November. On NPR Thursday, NDN's Simon Rosenberg highlighted the potentially double whammy for Democrats of inflamed nativist Republicans and a lukewarm Latino electorate:

"Whether or not the president pays a price will really depend [to] some degree on whether he can convince the Latino community that he's really done enough and is really committed to get this done," said Simon Rosenberg, who runs a Democratic think tank involved with the immigration issue. "I think we still don't know the outcome of that."
Even if a bill can't pass out of Congress this year, the president has to show he tried hard to get it done, Rosenberg says. He points to polls that show Latinos still support Obama but are less inclined to vote this year than they were in 2008.
"They haven't seen progress in Washington and in the issues that matter most to them and their families -- which is immigration," he said. "If this state of play is the same as when we go into the fall elections, Democrats will be having disappointments across the country, there's no doubt."

Mercifully for Democrats, a lot could change between now and November to limit those "disappointments across the country." The improving economy could help convince voters that President Obama and Congressional Democrats were right to battle for their recovery program in the face of unified opposition. In all likelihood, the fury over the health care debate will die down even as public support slowly increases. And Republicans are already paying a price for their choice to protect predatory Wall Street bankers. The generic Congressional preference, now roughly even, could yet turn the Democrats' way.
But Democratic legislative successes generally supported by the American people may not be enough to ward off 40 seat or larger losses in November. The huge majorities and turnout gains in 2008 among African-American, Hispanic and younger voters will be difficult to reproduce. At the end of the day, the propensity of Americans to support Democratic positions may be no match for the intensity of Republicans on those issues they care about most.