John Stossel is Right: Health Care is Not a Free Market

Fox News' resident libertarian John Stossel recently announced that he has lung cancer. The good news is that the former consumer affairs reporter turned free market crusader reportedly will make a full recovery. The bad news is that even from his hospital bed, Stossel continued to peddle both his dangerous misdiagnosis of what ails the American health care system and his even more destructive prescription for a cure.
But like the proverbial broken clock that is right twice a day, John Stossel is right that the American health care system is not currently a free market. That said, his demand that it become one--complete with transparent pricing and customer reviews of doctors, hospitals, procedures, and drugs for consumers who foot the bill for their own care--is utterly wrong. Recent American history and decades of international experience show the tens of millions of people forgoing treatment, millions bankrupted, and thousands needlessly dying each year are the certain price of the invisible finger of the market. 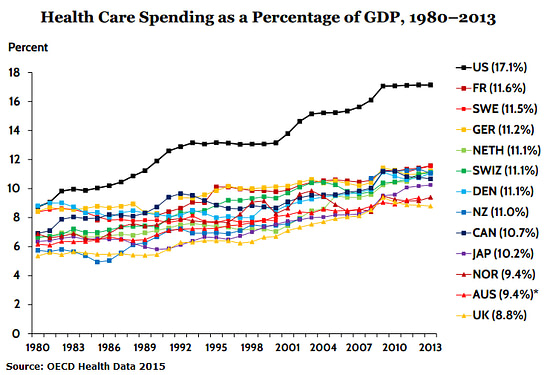 Now as in 2007, 2009, and 2012, patient Stossel is complaining about a long list of symptoms, including horrible customer service, mysterious prices, and so much more:

I'm as happy as the next guy to have government or my insurance company pay, but the result is that there's practically no free market. Markets work when buyer and seller deal directly with each other. That doesn't happen in hospitals.
You may ask, "How could it? Patients don't know which treatments are needed or which seller is best. Medicine is too complex for consumers to negotiate."
But cars, computers and airplane flights are complex, too, and the market still incentivizes sellers to discount and compete on service. It happens in medicine, too, when you get plastic surgery or Lasik surgery. Those doctors give patients their personal email addresses and cell phone numbers. They compete to please patients.

What's different about those specialties? The patient pays the bill.
No, the difference is that Lasik and plastic surgery are completely optional--and one option the patient-as-buyer has in such elective surgery scenarios is just walking away. Give that a try the next time you go for chemotherapy, need kidney dialysis or, say, rupture your spleen. Rather than spending time doing the medical equivalent of window shopping, it would be better to remember the advice of Dr. Paul Krugman:

There are a number of successful health-care systems, at least as measured by pretty good care much cheaper than here, and they are quite different from each other. There are, however, no examples of successful health care based on the principles of the free market, for one simple reason: in health care, the free market just doesn't work. And people who say that the market is the answer are flying in the face of both theory and overwhelming evidence.

It's no mystery as to why.
Continue reading at Daily Kos.