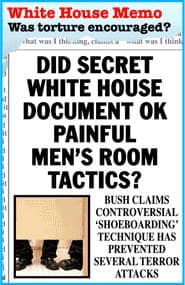 The revelations last week concerning secret memos authorizing an uninterrupted policy of detainee torture by the Bush administration added a new chapter to the President's book of unchecked power, unbridled lawlessness and deceit. But even from national disgrace can come humor.
Don Davis over at Satirical Political Report shows even torture can be laughed at. The Torture Advice Column by Devil's Advocate cheerfully helps guide would-be Gitmo interrogators and fans of the unitary executive up to the fine line of inducing the equivalent of organ failure. For example:

Dear Devil's Advocate: I'm confused about the latest rules on "Waterboarding"; is it in or out? Yours truly, CIA/CYA
Dear CIA/CYA: It's really very simple: Waterboarding is not only permitted but encouraged, as long as you wait until 1/2 hour after the detainee has eaten. We're not primitives, you know. Hang Ten, DA.

Meanwhile, Don Asmussen's Bad Reporter weighs in at the nexus of last week's scandals torturing the Bush White House and the Republican Party. Linking the New York Times memo story with the ongoing Larry Craig wide-stance saga, a Bad Reporter headline asks, "Did Secret White House Memo OK Painful Men's Room Tactics?"
As I've said more than once, the perversion of the United States under George W. Bush would be comical if it only it was fictional. Mercifully, even despair can still be funny.