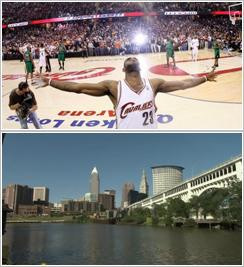 When my family left Cleveland in the early 1970's, it had about 725,000 people; in 2009, what was once the 8th largest city in the nation had shriveled to 431,000. Now as basketball superstar Lebron James prepares to announce his next stop on the road to becoming a $1 billion, one-man brand, the one-time Best Location in the Nation is steeling itself for another economic body blow. Because 41 years after the Cuyahoga River caught fire, Lebron's departure would pour gasoline on a city already at risk of going down in flames.
The Lebronomic impact of James's relocation to New York, Chicago, or Miami is negligible. But in Cleveland, an industrial giant with 915,000 residents in 1950 whose implosion left it the poorest city in America by 2004, the pain of Lebron's departure would be very real.
In recent weeks, a new pseudo-discipline of Jamesian economics has arisen to gauge the potential loss to Cleveland. James' trickle-down effect extends far beyond boosting the Cavaliers average attendance from 12,000 to over 20,000 a game. For example, Paul Solmon of PBS Newshour asked Kent State professor Mark Lyberger to put a number on it (full video here):

MARK LYBERGER: You look at 98-point-some million that the Cavaliers generate in revenue, and we plug those into the equation, when we look at everything across the board, there is a significant economic impact. It's about $140 million.
PAUL SOLMAN: A year.
But beyond the immediate cash boost to Cleveland, the Cavaliers franchise has grown by more than $200 million in value since James arrived. And then there's the psychological lift the mayor mentioned, which by itself can lead to more spending, more investing, and a higher quality of life.

Solmon's instant focus group included this assessment from restaurateur Christine Connell. The general manager of Flannery's described the change before and after the arrival of James:

As the AP noted in a July 4 article, assessing James' impact is an art, not a science. Without him, Cleveland might feel the "economic pinch":

Each home game during the regular season nets about $3.7 million, including ticket sales, souvenirs, food and hotel bookings, said Tamera Brown, vice president of marketing for Positively Cleveland, a convention and visitors bureau that promotes city tourism. Multiplied by 41 home games, that's more than $150 million...
The Cavaliers' contribution to the city's economy is comparable to that of the Rock and Roll Hall of Fame and Museum, which has an economic impact of more than $100 million annually, Brown said.

The previous week, The Cleveland Plain Dealer painted a much darker picture of the post-Lebron landscape. James' departure would mean not just the deflation of the Cavs' value as a franchise, but lost state and local income tax revenue. Looking back at the Chicago Bulls after Michael Jordan and the Houston Rockets after Hakeem Olajuwon, the Plain Dealer estimated a $150 million hit to ticket sales and downtown businesses:

If the Chosen One chooses someone else, downtown businesses figure to lose $48 million over the course of a season...
Say LeBron leaves and the crowds shrink to the size they were before he arrived: a little under 14,000 fans a game. That's 6,500 fewer people buying tickets, paying for parking, visiting restaurants, celebrating in bars and renting the occasional hotel room for the night.
Positively Cleveland, the city's convention and visitors bureau, estimates that the average fan spends $180 per game to see the Cavs at The Q [the Cavs' arena], meaning the smaller crowd would cost businesses $1.2 million per game. Multiply that by 41 home games, and you have $48 million.

John Skorburg, an economist at the University of Illinois at Chicago, claimed the James-led Cavs generate roughly $15 million for Greater Cleveland for each home playoff game. "So," the Plain Dealer concluded, "on top of $48 million, add 10 home playoff games -- a total of $150 million, according to Skorburg."
Tonight, Lebron James will announce his decision about his future home during a one-hour primetime special on ESPN. But that obscenity will pale in comparison to the expletives the people of Cleveland will send his way if he goes packing. The fury, Scott Raab of Esquire suggests, could biblical. The King could dethrone former Browns' owner Art Modell as the Most Hated Man in Cleveland:

Whatever LeBron is worth to any city besides Cleveland, his absence costs them nothing. And whatever he's worth to Cleveland in dollars is more than Cleveland can afford to lose.
If he leaves, LeBron will replace Art Modell as the most hated figure in the history of Cleveland sports. I think that's an easy call. All Modell did was fire Paul Brown, bully Jim Brown into early retirement, and move the Browns to Baltimore -- that's the short-short list...Should James go now -- without a ring and with full, first-hand knowledge of what his departure will mean to millions of sports fans in Cleveland, Akron, and all over Ohio who will have nothing left but despair -- nobody will remember him for seven years of excitement and hope. He'll forever be known for what he is: the son of a bitch who quit on the court, quit on his team, and quit on his home town.

And you can't put a price tag on that.

3 comments on “Lebronomics in Cleveland”