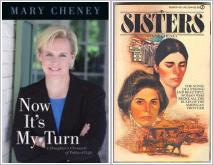 Washington is all abuzz about the new book from Mary Cheney, "Now It's My Turn." But while bloggers and gay rights activists ponder the question of Mary Cheney's lesbian self-loathing in her father's Republican Party, another epic tale of forbidden love from the Cheney family has largely been forgotten.
Back in 1981, Mary's mother Lynne Cheney published "Sisters," a tale of two women's hard lives and unspoken love in the Old West. The Second Lady showed could she could write - as well as talk - some trash:

"The women who embraced in the wagon were Adam and Eve crossing a dark cathedral stage - no, Eve and Eve, loving one another as they would not be able to once they ate of the fruit and knew themselves as they truly were."

But while it was Lynne Cheney who wrote "the novel of a strong and beautiful woman who broke the rules of the American frontier," it was daughter Mary who proclaimed to Diane Sawyer on ABC last week:

"Well, from my perspective, Heather and I already are married...The way I look at it, is we're just waiting for state and federal law to catch up with us."

As it turns out, this is just the latest case of life imitating art on the Right. (For more lewd and lascivious literary behavior from Scooter Libby, Bill O'Reilly and other conservative hard liners, click here.)