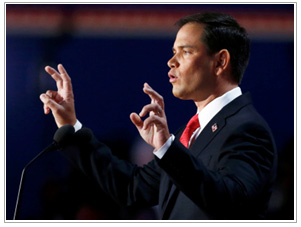 Florida Senator and obvious 2016 GOP White House hopeful Marco Rubio used a Fox News op-ed last Thursday to publish one of the most comical acts of budgetary extortion in recent memory. Demanding that Congress shutter the federal government rather than pay for the implementation of the Affordable Care Act in its next short term spending bill this fall, Rubio argued "it is President Obama who insists on shutting down the government unless it funds his failed ObamaCare experiment."
Unfortunately for Rubio, in the 48 hours that followed he and his fellow Republican extortionists were on the receiving end of a hellstorm of criticism from their own party. While Oklahoma's Tom Coburn branded the scam "a failed strategy for conservatives," North Carolina GOP Senator Richard Burr called Rubio's gambit simply "the dumbest idea I've ever heard." But despite that beat down, an undeterred Marco Rubio returned four days later to once again claim that President Obama must be blamed for the government shutdown Rubio himself hopes to manufacture.
Publishing "Shut Down ObamaCare, Not Government" in the Red State yesterday, Rubio warned that the Affordable Care Act will "lead to America's decline, because it emulates what other nations have tried." Then he repeated his inverted extortion argument from Bizarro Republican America that has drawn only derision and laughs in the real one:

Defunding ObamaCare is a critical first step to preventing all this, and this September, we need the American people to stand with us in demanding that not another cent be spent on implementing ObamaCare. At that point, the President will have a decision to make: sign it and keep the government open, or veto it and shut down the government.

That is cool. A highwayman holds a pistol to my ear, and mutters through his teeth, "Stand and deliver, or I shall kill you, and then you will be a murderer!"

But Obamacare's would-be assassins are even more pathetic than that. While Rubio and his fellow saboteurs demand the Washington spend no money on the Affordable Care Act, they nevertheless want to pocket the hundreds of billions of dollars of new revenue it will raise over the next decade. In fact, the Paul Ryan budget which garnered the votes of 98 percent of all Congressional Republicans--including Marco Rubio--depends on the same mix of new taxes and savings from Medicare providers that Obamacare does. Nevertheless, on the 48th anniversary of the President Johnson's signing it into law, Republicans are once again running ads accusing Democrats of taking the same $716 billion from Medicare overwhelming GOP majorities repeatedly endorsed.
Hopefully, American voters won't be duped as they were in 2010 by Marco Rubio and the Party of Lincoln. But then again, you can fool some of the people all of the time, and that's the Republicans' target market.