Last summer, Moody's economist and former adviser to Republican presidential candidate John McCain Mark Zandi authored a study which concluded that combined federal interventions beginning in the fall of 2008 prevented the Great Recession from becoming Depression 2.0. Now in a new report, Zandi warns that the GOP's plan to slash $61 billion in federal spending could threaten 700,000 jobs and put the quickening pace of the U.S. economic recovery at risk.
As the Washington Post explained, Zandi's analysis is just the latest red flag regarding the likely economic blowback from the Republican demand to ax roughly a sixth of all discretionary, non-defense spending now:

Zandi, an architect of the 2009 stimulus package who has advised both political parties, predicts that the GOP package would reduce economic growth by 0.5 percentage points this year, and by 0.2 percentage points in 2012, resulting in 700,000 fewer jobs by the end of next year.
His report comes on the heels of a similar analysis last week by the investment bank Goldman Sachs, which predicted that the Republican spending cuts would cause even greater damage to the economy, slowing growth by as much as 2 percentage points in the second and third quarters of this year.

While acknowledging "Significant government spending restraint is vital," Zandi cautioned that "given the still halting economic recovery, it would be counterproductive for that restraint to begin until the economy is creating enough jobs to bring down the still very high unemployment rate." He also warned that if the Republicans' threats to shutdown the government come to fruition, they "would also be taking a big chance with the recovery."
Not as big a chance, it turns out, as they did when every Republican in the House and all but three in the Senate voted against the 2009 American Recovery and Reinvestment Act. 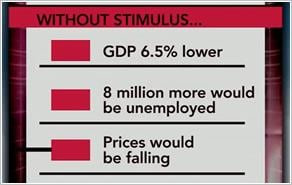 Last July, anotheranalysis from Zandi and Princeton economist and former Fed vice chairman Alan Blinder detailed the enormous impact of the total federal response under both Presidents Bush and Obama.
As the New York Times explained:

In a new paper, the economists argue that without the Wall Street bailout, the bank stress tests, the emergency lending and asset purchases by the Federal Reserve, and the Obama administration's fiscal stimulus program, the nation's gross domestic product would be about 6.5 percent lower this year.
In addition, there would be about 8.5 million fewer jobs, on top of the more than 8 million already lost; and the economy would be experiencing deflation, instead of low inflation.

In "How the Great Recession Was Brought to an End," Blinder and Zandi's models confirmed the impact of the Obama recovery program:

The effects of the fiscal stimulus alone appear very substantial, raising 2010 real GDP by about 3.4%, holding the unemployment rate about 1½ percentage points lower, and adding almost 2.7 million jobs to U.S. payrolls. These estimates of the fiscal impact are broadly consistent with those made by the CBO and the Obama administration.

But their modeling also suggests that the totality of federal efforts to rescue the banking system dating back to the fall of 2008 prevented a catastrophic collapse:

We find that its effects on real GDP, jobs, and inflation are huge, and probably averted what could have been called Great Depression 2.0. For example, we estimate that, without the government's response, GDP in 2010 would be about 11.5% lower, payroll employment would be less by some 8½ million jobs, and the nation would now be experiencing deflation.

For their part, Zandi and Blinder caution that "No one can know for sure what the world would look like today if policymakers had not acted as they did--our estimates are just that, estimates." But whatever questions remain about, say, the bank rescue, the auto bailout or the Obama administration's foreclosure programs, the authors contend:

While all of these questions deserve careful consideration, it is clear that laissez faire was not an option; policymakers had to act. Not responding would have left both the economy and the government's fiscal situation in far graver condition. We conclude that Ben Bernanke was probably right when he said that "We came very close in October [2008] to Depression 2.0."

As the budget battles resume this week, Zandi's twin findings about how the American economy was saved - and who saved it - is worth keeping in mind.