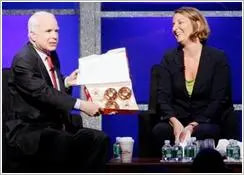 Addressing the annual meeting of the Associated Press, John McCain stayed true to form in his ongoing courtship of the media. Pandering to what is in essence his base, McCain proclaimed his support for a proposed federal press shield law. Then in typical fashion, McCain joined President Bush in decrying the use of confidential sources by the New York Times and others to expose White House criminality.
During his remarks, McCain used the press shield issue to woo a press corps whose hearts he had long since won over. Citing the "disgrace of Abu Ghraib," revelations which "made it much harder to protect the American people from harm," McCain announced that he had "narrowly decided" to support the shield legislation:

"I respect those of my colleagues who have decided not to; appreciate very much the concerns that have informed their position, and encourage further negotiations to address those concerns. But if the vote were held today, I would vote yes. By so doing, I and others, on behalf of the people we represent, are willing to invest in the press a very solemn trust that in the use of confidential sources you will not do more harm than good whether it comes to the security of the nation or the reputation of good people. "

But McCain also made no bones that the harm he feared was damage to the Bush White House and its Republican allies. Before he pronounced his fealty to protecting confidential sources, he also made it clear he supported President Bush, former Attorney General Alberto Gonzales and their right-wing amen corner in wanting to punish the New York Times over its 2005 revelation of illegal NSA domestic surveillance.

"I take a very, very dim view of stories that disclose classified information that unnecessarily threatens or makes it more difficult to protect the physical security of Americans. I think that has happened before, rarely, but it has happened. I think the New York Times' decision to disclose surveillance programs to monitor the conversations of people who wish to do us harm came too close to crossing that line. And I understand completely why the government charged with defending our security would want to discourage that from happening and hold the people who disclosed that damaging information accountable for their action."

As it turns out, McCain today sounds little different than Bush and the conservative commentariat. After the December 16, 2005 revelations about the NSA program by New York Times reporters Eric Lichtblau and James Risen, President Bush raged three days later about what he deemed "a shameful act" that is "helping the enemy". Claiming he himself didn't order an investigation, Bush added "the Justice Department, I presume, will proceed forward with a full investigation" At a subsequent press conference that same day, Alberto Gonzales suggested the retribution that was to come:

Americans didn't have to wait long. In August 2007, a team of FBI agents raided the home of Thomas M. Tamm, a veteran prosecutor and former official of the Office of Intelligence Policy and Review (OIPR) within DOJ.
The Bush administration's amen corner among the conservative chattering classes was not content to rest with a witch-hunt for the NSA whistle-blowers. They wanted revenge against the New York Times itself.
In 2006 testimony before Congress and again in an August 2007 rant, Commentary editor Gabriel Schoenfeld urged prosecution of Lichtblau, Risen and the paper:

"With the investigation making progress, the possibility remains that even if the New York Times is not indicted, its reporters - James Risen and Eric Lichtblau - might be called before the grand jury and asked to confirm under oath that Tamm, or some other suspect, was their source. That is what happened to a whole battalion of journalists in the investigation of Scooter Libby in the Valerie Plame fiasco.
If Risen and Lichtblau promised their source confidentiality, they might choose not to testify. That would potentially place them, like Judith Miller in the Libby investigation, in contempt of court and even land them in prison."

In his new book, Bush's Law: The Remaking of American Justice, Times reporter Eric Lichtblau details deceitful stonewalling and the threats of retribution that followed show a Bush administration determined to conceal its criminality at any cost. He describes Bush White House desperate to kill the story at any cost, all while using fear-mongering language that foreshadowed John McCain's today:

For more than an hour, we told Bush's aides what we knew about the wiretapping program, and they in turn told us why it would do grave harm to national security to let anyone else in on the secret. Consider the financial damage to the phone carriers that took part in the program, one official implored. If the terrorists knew about the wiretapping program, it would be rendered useless and would have to be shut down immediately, another official urged: "It's all the marbles." The risk to national security was incalculable, the White House VIPs said, their voices stern, their faces drawn. "The enemy," one official warned, "is inside the gates." The cliches did their work; the message was unmistakable: If the New York Times went ahead and published this story, we would share the blame for the next terrorist attack.

For his part, Eric Lichtblau concludes that the New York Times' decision to proceed with the NSA domestic surveillance story was undoubtedly the right one:

"More than two years later, the Times' decision to publish the story - a decision that was once so controversial - has been largely overshadowed by all the other political and legal clamor surrounding President Bush's warrantless wiretapping program: the dozens of civil lawsuits; the ongoing government investigations; the raging congressional debate; and the still-unresolved question, which Congress will take up again next week, of whether phone companies should be given legal immunity for their cooperation in the program."

As with the debate over detainee torture and the Scooter Libby (a leaker of national security information whom McCain ironically called a " dedicated servant" who was "singled out unfairly"), John McCain wants to have it both ways. He wants the press to see him as independent, as the maverick, all while kowtowing the Bush administration position. And for now, his pandering to the press seems to be working.