Meanwhile in the UK, the Hopelessness of Austerity 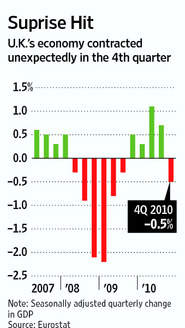 In the aftermath of Friday's budget agreement, it's no longer a question of whether the U.S. is going to slash spending, but where, when and by how much. On the heels of the $38.5 billion in cuts to discretionary, non-defense spending Obama adviser David Plouffe deemed "draconian", President Obama this week will lay out his vision for long-term deficit reduction. And with Republicans promising more budgetary blackmail over the debt ceiling and 2012 spending, austerity is the word of the day.
Judging by the grim experience in the UK, that is a very, very bad thing.
The British headlines tell the tale. This week, the BBC reported "UK economy faces 'worrying' times." Meanwhile, the Guardian warned David Cameron's Tory government:

Some of the UK's most prominent business leaders, including individuals who gave their personal stamp of approval to the chancellor's aggressive spending cuts, have said they have growing concerns about the state of the economy, warning of weak growth and rising inflation ahead.

They have good reason to be worried. While U.S. gross domestic product jumped by 3.2% in the fourth quarter of 2010, the British economy contracted by half a point. If that dismal performance could be attributed in part to even more dismal weather, the future looks bleak as well.
Last week, the OECD predicted continued sluggish growth for the UK, cutting back its forecasts for the quarter and the year:

In a survey of the G7 economies, the OECD estimated that UK gross domestic product would expand at an annualised rate of 1% in the second quarter.
This compared with an OECD forecast in November of 1.3%.
The OECD said the US economy was expected to expand by 3.4%, followed by France at 2.8% and Germany at 2.3%.

While the UK GDP numbers for the first quarter of 2011 aren't due until April 27, the picture painted by British Chamber of Commerce survey wasn't a pretty one:

"The upturn in Q1 is likely to have been only slightly larger than the decline of 0.5% seen in Q4 2010", when the severe weather caused disruptions, it said.
That would mean output levels were only "marginally higher" than they were before the weather took its toll, it added.

If their economic prospects are diverging, the policy prescriptions of the Democratic Obama administration and the conservative Cameron government have been even more so. Following the $787 billion stimulus program in early 2009, the Carnegie Endowment noted that "U.S. leaders agreed last December to extend tax cuts and enact a payroll-tax holiday that the Congressional Budget Office (CBO) projects will cost 6 percent of 2010 GDP over the next five years." In sharp contrast:

In one of the great surprises of 2010, a new British government announced plans to cut public investment and reduce social spending by £80.5 billion ($131 billion) and enact tax hikes of an additional £29.8 billion ($49 billion) through 2015. The planned reduction in Britain's cyclically adjusted fiscal deficit--nearly 8 percent of GDP from 2010 through 2015--is in line with that of Greece's draconian austerity program and larger than the planned reductions in Ireland (6 percent of GDP), Portugal (6 percent), Spain (3.5 percent), and Italy (1.5 percent) over the same period.

To be sure, the economic pictures in the UK and the U.S. are far from identical. While the depth of the recession was worse here, as a percentage of GDP London has much higher taxes, spending and debt. (As the CBO noted, for the federal government in 2011 "revenues would be just under 15 percent of GDP; levels that low have not been seen since 1950.") Compared to the relatively paltry $39 billion in spending cuts secured by this week's budget agreement in Washington, Prime Minister David Cameron's austerity budget announced in October seeks to close the budget gap within five years by slashing spending, raising taxes and sacking 490,000 government workers.
(It's worth noting that American workers have had it worse during this economic downturn. At 8.9%, unemployment is a full point higher in the UK. Further, the British safety net, especially in the form of health insurance that doesn't disappear with lost jobs, cushioned the blow for workers in the UK. Worse still for Americans, since 1977 incomes for the middle quintile of earners grew by only 13%, compared to 37% in England.)
As it turns out, the announcement that the UK economy contracted by 0.5% in the fourth quarter came on the same day Republican Paul Ryan warned in his State of the Union response that Greece, Ireland and the United Kingdom "didn't act soon enough; and now their governments have been forced to impose painful austerity measures: large benefit cuts to seniors and huge tax increases on everybody." But as Paul Krugman was quick to point out:

Well, contrary to what Mr. Ryan seemed to imply, Britain has not, in fact, suffered a debt crisis. True, David Cameron, who became prime minister last May, has made a sharp turn toward fiscal austerity. But that was a choice, not a response to market pressure.
And underlying that choice was the new British government's adherence to the same theory offered by Republicans to justify their demand for immediate spending cuts here -- the claim that slashing government spending in the face of a depressed economy will actually help growth rather than hurt it.
So how's that theory looking? Not good. The British economy, which seemed to be recovering earlier in 2010, turned down again in the fourth quarter. Yes, weather was a factor, and, no, you shouldn't read too much into one quarter's numbers. But there's certainly no sign of the surging private-sector confidence that was supposed to offset the direct effects of eliminating half-a-million government jobs. And, as a result, there's no comfort in the British experience for Republican claims that the United States needs spending cuts in the face of mass unemployment.

Meanwhile back in the U.S., the American economy is starting to ramp up. While unemployment remains painfully high, last quarter the $13.38 trillion U.S. economy exceeded its pre-recession peak reached in the final three months of 2007. And as the New York Times noted, "Internationally, the G.D.P. numbers indicate that the United States recovered more rapidly than did Japan or any major member of the European Union." Compare the 0.14% American growth since the start of the Bush recession to the 4.4% drop-off in the UK and the changes from peak GDP elsewhere:

Looking at the data, the Times' Floyd Norris concluded:

Each of the two Republican responses to the State of the Union message on Tuesday referred to the "failed stimulus" program enacted by the Democrats. That has become a standard phrase, and it seems to me it is misleading, if not completely wrong.

Of course, it was President Obama and Democrats in Congress who pursued the pro-growth policies that brought the U.S. economy back from the brink and onto a trajectory for recovery.

Over the past year, the U.S. economy added 1.1 million new jobs overall, including 1.3 million in the private sector, which enjoyed 12 straight months of growth. By last June, the nonpartisan Congressional Budget Office (CBO) estimated the Obama stimulus program had saved or created up to 3.3 million jobs, lowered the unemployment rate by as much as 1.8% and boosted GDP by 4.5%. A recent analysis of Census data by the Center on Budget and Policy Priorities (CBPP) revealed that federal programs kept 4.5 million Americans out of poverty in 2009. For his part, former John McCain adviser Mark Zandi in August concluded that the combined federal interventions beginning in the fall of 2008 prevented the Great Recession from becoming Depression 2.0:

We find that its effects on real GDP, jobs, and inflation are huge, and probably averted what could have been called Great Depression 2.0. For example, we estimate that, without the government's response, GDP in 2010 would be about 11.5% lower, payroll employment would be less by some 8½ million jobs, and the nation would now be experiencing deflation.

Not, that is, if Republicans have their way.
State and local governments have already shed over 400,000 jobs in the last two plus years. With state budget shortfalls estimated to top $100 billion for each of the next two years, analysts including Moody's Economics and the Center on Budget and Policy Priorities have forecast still more state and local job losses reaching between 400,000 and 900,000. (It's no wonder Ezra Klein of the Washington Post deemed cutbacks at the state level the "anti-stimulus.") But any hope of help from the federal government is a political impossibility.
Republicans are promising to make things much, much worse. Despite his party having voted seven times to increase the debt ceiling under President George W. Bush, Senate Minority Leader Mitch McConnell is threatening to block action on the $14.3 trillion debt ceiling unless Democrats put a balanced budget amendment to the Constitution and steep cuts to Social Security, Medicare and Medicaid on the table. House Budget Committee chairman Paul Ryan's 2012 budget proposal provides them, with a $1 trillion slashed from a Medicaid and $3 trillion from Medicare. (While the former is converted into a block grant program for the states, Medicare is ended altogether, replaced with a voucher system which inevitably ration health care for future senior citizens.) More cynical still, virtually of all Ryan's proposed $4.3 trillion in spending cuts (almost three quarters of which is drained from programs for the poor and elderly) goes to paying for yet another tax cut windfall for the wealthy.
If you're wondering what that Republican vision of America looks like, the future is on the line from the other side of the Atlantic.
It's London calling.
(For more background, see the New York Times Paul Krugman on "The Austerity Delusion" and David Leonhardt on "Why Budget Cuts Don't Bring Prosperity.")