If you ever wondered what a 21st century nullification crisis would look like, look no further than Missouri. One hundred and forty eight years after the end of the Civil War, the New York Times reports, "the Republican-controlled Missouri legislature is expected to enact a statute next month nullifying all federal gun laws in the state and making it a crime for federal agents to enforce them." Meanwhile, the Show Me State is doing everything it can to effectively block implementation of the Affordable Care Act. 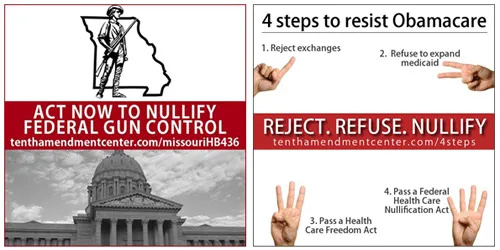 Like Texas, Mississippi, Arizona and a host of other states, Missouri is seemingly turning to the Confederate Constitution as the law of the land. Hoping to override Democratic Governor Jay Nixon's veto, Missouri Republicans are aiming at the U.S. Constitution's Supremacy Clause:

Richard G. Callahan, the United States attorney for the Eastern District of Missouri, is concerned. He cited a recent joint operation of federal, state and local law enforcement officials that led to 159 arrests and the seizing of 267 weapons, and noted that the measure "would have outlawed such operations, and would have made criminals out of the law enforcement officers."

And not just criminals. As the Times explained, "A Missourian arrested under federal firearm statutes would even be able to sue the arresting officer."
While the Missouri GOP is seeking the de jure nullification of federal firearms laws, Show Me State Republicans are also pursuing the de facto nullification of Obamacare.
An estimated 877,000 people in Missouri are currently uninsured. But despite Governor Nixon's best effort, Republican legislators block the expansion of Medicaid, leaving 267,000 in Missouri stuck in the "coverage gap." All told, some 5.5 million people in GOP-dominated states, McClatchy explained, will find themselves trapped in "a bureaucratic twilight zone where people with poverty-level incomes don't qualify for Medicaid and can't get tax credits to help buy coverage on the new insurance marketplaces."
But in Missouri, things will be even worse. Republicans there didn't just refuse to accept billions in federal Medicaid dollars or set up their own state health care exchange. They are actively undermining any outreach or customer service for Show Me State residents seeking information about or help enrolling in new insurance plans made possible by the Affordable Care Act.
The barriers to health insurance erected by Republicans are staggering in their size and scope. Last year, the Washington Post reported, "voters approved a ballot initiative barring state and local government officials from helping to implement the law." Along with Arizona, Alabama, Oklahoma, Texas and Wyoming, Missouri is refusing to enforce the ACA's new insurance reforms and prohibitions, such as refusing to cover those with pre-existing conditions, using "rescission" to drop coverage for those who become sick, discriminating against women and setting annual or lifetime benefits caps. And while Colorado, California, Oregon and other blue states are spending hundreds of millions of dollars to fund thousands of customer service "navigators," in Missouri "local officials have been barred from doing anything to help put the law into place."

More than a dozen states have imposed licensing rules and limits on these helpers, with the encouragement of professional insurance agents and brokers, who lobbied heavily for the restrictions...In Missouri, which has a Democratic governor but a Republican legislature, they are required to immediately cut off contact with any customers who at some point have talked to a professional broker or agent.

The result, as the New York Times revealed earlier this month, is that in Missouri, "looking for the new health insurance marketplace, set to open in this state in two months, is like searching for a unicorn."
Of course, nullification is the unicorn states' rights zealots have been seeking for two hundred years. Should it pass the legislature, Missouri's new statute nullifying the enforcement of new federal gun laws will quickly be ruled unconstitutional. Unfortunately, for hundreds of thousands of uninsured people in the Show Me State, Republicans are effectively nullifying the opportunity to obtain health care.