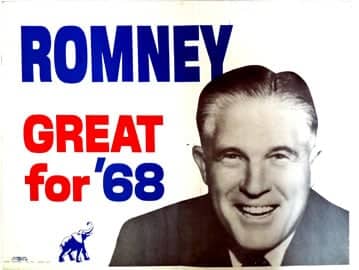 With the premiere of the documentary Mitt this week, the Mitt Romney rehabilitation project will be projected on screens around America. But the conservative effort to reinvent the flip-flopping, formerly pro-choice, health care reforming Massachusetts vulture capitalist as a paragon of faith, fatherhood and family values is doomed to failure. Not because Willard Mitt Romney isn't a decent man, but because American voters viscerally understood that the reach of his empathy never extended beyond the small constellation of his family, his friends, his business colleagues and his church. And as the film reveals, Mitt Romney tried to plug that empathy gap by cynically using his beloved father George to provide the patina of concern for minorities, the poor and working Americans he himself could not muster.
Writing about Mitt in the Washington Times, conservative columnist Byron York was struck by Romney's pessimism and lack of confidence. But even more striking was the son's acknowledgement that he didn't measure to the father and the path the AMC magnate turned Michigan governor blazed for him.

Romney pointed out that in every debate he began by writing "Dad" at the top of the paper.
"That's what I start with: 'Dad,'" Romney explained. "I always think about Dad and about I am standing on his shoulders. I would not be there, there's no way I would be able to be running for president, if Dad hadn't done what Dad did. He's the real deal ..."
"You're the real deal," said one of Romney's sons.
Romney didn't pause. "The guy was born in Mexico. He didn't have a college degree. He became head of a car company and became a governor. It would have never entered my mind to be in politics, how can you go from his beginning to think, I can be head of a car company, I can run for governor, I can run for president?"
Romney wasn't finished. "The gap -- for me, I started where he ended up. I started off with money and education, Harvard Business School, Harvard Law School. For me it's moving that far" -- Romney held two fingers close together -- "for him, it's like that," Romney said, holding his arms wide apart.

Romney's poignant confession would have been touching if he had been heading to a therapist's couch rather than the chair in the Oval Office. And Mitt might emerge as a more sympathetic character if he hadn't just spent all of 2012 using his father's rags-to-riches story as a substitute for his own life of privileged detachment.
Long before his infamous "47 percent" speech became public, Mitt Romney charged that President Obama had "Our president has divided the nation, engaged in class warfare and attacked the free enterprise system that has made America the economic envy of the world." As he put it in January 2012, Mitt Romney was the victim:

"When my opponents attack success and free enterprise, they're not only attacking me, they're attacking every person who dreams of a better future. He's attacking you."

But as he made clear in February, by "you" Mitt Romney meant himself. Or more accurately, his father:

"My father never graduated from college. He apprenticed, as a lath and plaster carpenter, and he was darn good at it. He learned how to put a handful of nails in his mouth and spit them out, point forward. On his honeymoon, he and Mom drove across the country. Dad sold aluminum paint along the way, to pay for gas and hotels.
There were a lot reasons my father could have given up or set his sights lower. But Dad always believed in America; and in that America, a lath and plaster man could work his way up to running a little car company called American Motors and end up Governor of a state where he had once sold aluminum paint."

Unfortunately for Mitt, George Romney didn't make his money from money, but by making things. And as Rick Perlstein documented, George Romney, a 1968 presidential hopeful who released a dozen years of his own tax returns because "one year could be a fluke, perhaps done for show", didn't forget who helped make him rich at AMC:

As a CEO he would give back part of his salary and bonus to the company when he thought they were too high. He offered a pioneering profit-sharing plan to his employees. Most strikingly, asked about the idea that "rugged individualism" was the key to America's success, he snapped back, "It's nothing but a political banner to cover up greed."

Mitt Romney could never say such things with a straight face to show his concern for working Americans. After all, the man who paid a lower tax rate than many middle class families supported "right to work" legislation, declared the U.S. should "let Detroit go bankrupt" and denounced the "union bosses" and "crony capitalism" of the United Auto Workers whose sacrifices helped make President Obama's bailout of GM and Chrysler possible. In March 2012, the man who pretended he used to worry about getting a "pink slip" admitted he stills gets a chuckle thinking about those who did when his father moved AMC jobs from Michigan to Wisconsin.
So in August 2012, Mitt Romney exhumed his father to show compassion by proxy:

"I watched him at American Motors as he interacted with not only executives, but workers there. I remember going to Milwaukee as he addressed UAW employees at the Milwaukee stadium and described to them the new profit-sharing program that he and the head of the UAW had put in place."

That from the man denounced "union stooges" and slandered federal employees as "our servants who are making a lot more money than we are."
On civil rights, race relations and immigration, too, Romney could hardly run on his own record. After all, he didn't just endorse "self-deportation" and declare "I like Voter ID law," but went played to his party's Birther base when joked at a rally in Michigan:

"No one's ever asked to see my birth certificate. They know that this is the place that we were born and raised."

With statements like that, it's no wonder Mitt Romney "expected" to get boos when he went to address the NAACP in July 2012. (Many have argued he wanted to get those boos, precisely because his real audience wasn't the African-American attendees in the room but the white Republicans watching on Fox News at home.) "I believe that if you understood who I truly am in my heart, and if it were possible to fully communicate what I believe is in the real, enduring best interest of African American families," Mitt told the assembled activists, "you would vote for me for president." (If they looked not to his heart but his record in Massachusetts, they would have learned that Governor Mitt Romney moved immediately--and unilaterally--to shutter the state's affirmative action office.) But unable to muster examples of his own commitment to civil rights, Romney the Younger nevertheless used his father's instead.

Yet always, in both parties, there have been men and women of integrity, decency, and humility who called injustice by its name. For every one of us a particular person comes to mind, someone who set a standard of conduct and made us better by their example. For me, that man is my father, George Romney. It wasn't just that my Dad helped write the civil rights provision for the Michigan Constitution, though he did. It wasn't just that he helped create Michigan's first civil rights commission, or that as governor he marched for civil rights in Detroit - though he did those things, too. More than these public acts, it was the kind of man he was, and the way he dealt with every person, black or white. He was a man of the fairest instincts, and a man of faith who knew that every person was a child of God. I'm grateful to him for so many things, and above all for the knowledge of God, whose ways are not always our ways, but whose justice is certain and whose mercy endures forever.

One part of his father's legacy Mitt probably wasn't so grateful for was the Michigan Governor's willingness to work with a broad range of civil rights leaders, including the current GOP bogeyman Saul Alinsky. As a 1967 biography George Romney recounted:

"I think you ought to listen to Alinsky," Romney told his reluctant white friends. 'It seems to me that we are always talking to the same people. Maybe the time has come to hear new voices." Said an Episcopal bishop, 'He made Alinsky sound like a Republican.'"

On issue after issue, Mitt Romney made his father George sound like a Democrat. Of course, he had to. After all, his Republican Party would no longer have the likes of George Romney while the American people would not have the likes of Mitt Romney as their president. As Byron York explained, Mitt was tormented that his father "was a better man than he will ever be."
As his defeat in 2012 showed, Mitt Romney's fears were well-founded.