Netanyahu Tries to Appropriate American Grief over Orlando for Israel

A week after the slaughter of 49 people in The Pulse nightclub in Orlando, Florida, there is still much we don't know. Topping the list is Omar Mateen's motivation for his mass killing. The long-troubled 29 year old American son of Afghan immigrants hardly fits the mold of so-called "radicalization." Mateen's lack of religious commitment and his virulent (and possibly self-loathing) anti-gay fury don't neatly square with his pledge to the Islamic State at the very end of his life. Just what really happened in the dark nexus where religious zealotry, homophobia, mental illness and America's gun pathology converge remains a mystery.
But this we do know. The highest officials in the Israeli government of Prime Minister Benjamin Netanyahu government would have us believe Orlando is historically part of Greater Israel and The Pulse is its eternal capital. In Bibi's telling, Israel and the United States are fighting a common terrorist enemy.

Just as he did during his campaign to sabotage the P5+1 nuclear agreement with Iran, the Likud leader used the nightclub carnage to manufacture the specter of a unified, global jihadist threat to Israel and the West. "Why did the terrorist murder them?" Bibi asked and answered on Facebook on June 15, "Because he was driven by a fanatical hatred. He targeted the LGBT community because he believed they were evil."

This week's shooting wasn't merely an attack on the LGBT community. It was an attack on all of us, on our common values of freedom and diversity and choice.
Radical Islamist terror makes no distinction between shades of infidel.
This week it was gays in Orlando. A few days before that it was Jews in Tel Aviv. Before that it was music fans in Paris; Travelers in Brussels; Yazidis in Iraq; Community workers in San Bernardino; Christians and journalists in Syria.
All of us are targets.

Netanyahu was three days late to the party. On June 12, his former Ambassador to the United States Dr. Michael Oren took to Twitter to claim that America and Israel are fighting the same fight.

Terror in Orlando is the same as terror in Tel Aviv. Our hearts go out to the families of the victims. Israel knows and shares their pain.

But no matter how often the Israeli right repeats it, terror in Orlando isn't the same as terror in Tel Aviv, where Palestinian gunmen murdered four Israelis two weeks ago. Mayor Ron Huldai explained why:

"We might be the only country in the world where another nation is under occupation without civil rights. You can't hold people in a situation of occupation and hope they'll reach the conclusion everything is alright."

That's right. In the United States, the cases of isolated terrorists like the Tsarnaev brothers in Boston, the San Bernardino shooters and Omar Mateen in Orlando were sui generis. In each, the unique circumstances of the killers and their individual personal histories and pathologies have made drawing sweeping conclusions about past and future attacks difficult. The U.S. invasion of Iraq, by bringing Al Qaeda to the region and then the Islamic State into being, created an inspirational--if not aspirational--calling for these angry, alienated and disturbed "lone wolves."
But for Israelis, terrorism has been a grim fact of life since the nation's founding. But since its occupation of Gaza and the West Bank in 1967, it has been the result of government policy as well. Hundreds of thousands of Palestinians both in the territories and inside Israel have in their lifetimes been displaced from their homes. The dramatic expansion of West Bank settlements, Israel's dramatic lurch to the right and its perpetual occupation of the West Bank have been fueling simmering tensions and outbursts of violence for years. With no prospect for a peaceful, two-state solution in sight, stabbings, shootings and car attacks carried out by Palestinians and Arab citizens of Israel have been on the rise for months.
While the Netanyahu government seems more than willing to manage both the intermittent violence and its own growing international isolation, leaders of Israel's security services are not. As former Shin Bet head Yuval Diskin put it during the 2014 Gaza war: 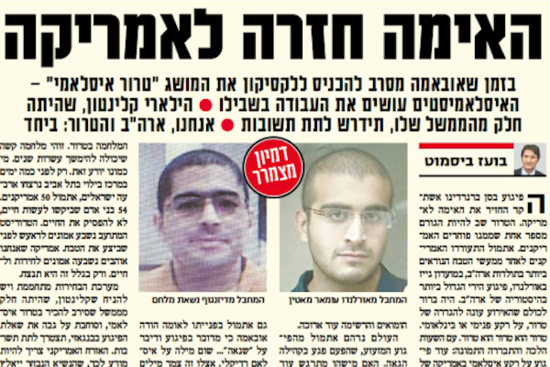 In the meantime, the Israeli campaign to equate U.S domestic terrorism with the ongoing dangers it faces continues unabated. Within hours of the Orlando bloodbath, Ambassador Oren was quoted on Twitter proclaiming, "If I were Trump, I'd emphasize the Muslim name, Omar Saddiqui Mateen. This changes race." (As the Times' Roger Cohen reported, Oren later claimed that "he said Trump would do this, not that he had recommended it." Of course, it was this time last year that Oren channeled Dinesh D'Souza by describing "How Obama opened his heart to the 'Muslim World'.") And in Israel Hayom, the pro-Netanyahu newspaper funded by GOP sugar daddy Sheldon Adelson, an article featured side-by-side pictures of Omar Mateen and Tel Aviv killer Neshat Melhem under the headline, "Chillingly similar." As 972 explained, Israel Hayom was doing double-duty by demonizing Israel's own Arab citizens while pretending it shares a common enemy with the United States. It doesn't, but that won't stop Bibi Netanyahu and his allies from appropriating Americans' grief over Orlando for their own purposes.