Two new reports this week served to highlight the central role of the housing market in the U.S. economy and in driving the living standards of Americans. Coming on the same day the Dow reached an all-time high, the housing data is not good. 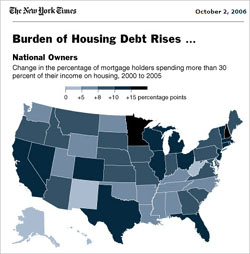 On Tuesday, the Census Bureau reported that Americans have become "house poor," dramatically increasing the percentage of their incomes dedicated to housing. Americans now spend 21% of their incomes on housing, up from under 19% as recently as 1999. As Perrspectives recently detailed, the surge in housing prices (32%) from 2000 to 2005 coincided with a decline in Americans' median household income (-2.8%). The result, as Moody's economist Mark Zandi makes clear, is an increasingly over-burdened - and vulnerable - middle class:

"It is now much more difficult for first-time homebuyers to get into the market, and for existing homeowners to trade up. This decline in affordability is the catalyst for the current sharp decline in housing activity. Until incomes catch up, the housing market is going to remain flat."

All of which brings us to the second gloomy forecast for the American housing market. The AP announced that Moody's will issue a report on Wednesday painting a bleak picture for the future. After five years of explosive growth, Moody's projects housing prices will tumble in over 100 of the nation's largest metropolitan areas, especially those in the Northeast, Florida and California. The report, "Housing at the Tipping Point," predicts a 3.7% drop in home values for 2007, the worst performance for an entire year since the Great Depression.
The growing dysfunction in the housing sector is just another of the defining characteristics of the "Bush League Economy." While the White House touts strong GDP, productivity and unemployment levels, Americans' standards of living decline in the face of stagnant wages, falling median household incomes, stratospheric home, health care and energy costs, as well as a mountain of personal debt. With the U.S. Insecurity Index disturbingly high, the Bush economy is just a house of cards.