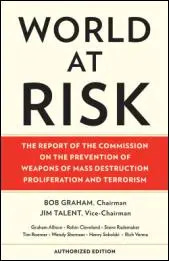 Even as Barack Obama was introducing his national security team to the nation Monday, Americans learned of a chilling new report detailing the scope of the global threat of weapons of mass destruction. Dramatically titled "World at Risk," the study led by former Senators Bob Graham (D-FL) and Jim Talent (R-MO) predicted a better than even chance that the world would experience a WMD attack within the next five years. As if President-Elect Obama didn't already have enough to worry about, the report eerily echoed the dire - and hauntingly accurate - February 2001 warnings by the Hart-Rudman Commission about the growing terrorism threat to the United States.
The nine-member Commission on the Prevention of Weapons of Mass Destruction Proliferation and Terrorism (web site here) offered its grim assessment (PDF here) that the United States and its allies must act quickly to avert the disaster of an attack carried out with biological, nuclear or other unconventional weapons somewhere in the world. The six month study, mandated by Congress to address a key recommendation of the 9/11 Commission, opens with both a dark forecast and a call to action:

The Commission believes that unless the world community acts decisively and with great urgency, it is more likely than not that a weapon of mass destruction will be used in a terrorist attack somewhere in the world by the end of 2013.

While the Graham panel concluded "terrorists are more likely to be able to obtain and use a biological weapon than a nuclear weapon," nuclear weapons programs in countries such as Iran and North Korea and the growing risk poorly secured biological pathogens suggest, as the New York Times put it, "unconventional threats are fast outpacing the defenses arrayed to confront them." And at the very time "America’s margin of safety is shrinking, not growing," the panel warned, an increasingly unstable Pakistan will be at the center of Obama administration policymakers' nightmares:

Were one to map terrorism and weapons of mass destruction today, all roads would intersect in Pakistan. It has nuclear weapons and a history of unstable governments, and parts of its territory are currently a safe haven for al Qaeda and other terrorists. Moreover, given Pakistan's tense relationship with India, its buildup of nuclear weapons is exacerbating the prospect of a dangerous nuclear arms race in South Asia that could lead to a nuclear conflict...

...Pakistan is an ally, but there is a grave danger it could also be an unwitting source of a terrorist attack on the United States - possibly with weapons of mass destruction.

If this grim alarm to an incoming administration sounds familiar, it should. Back in 2001, the U.S. Commission on National Security/21st Century led by Gary Hart and Warren Rudman offered the new President George W. Bush a similarly frightening assessment of the looming terrorism threat.
The nonpartisan Hart-Rudman panel delivered its Phase III report, "Road Map for National Security: Imperative for Change," in February 2001. Months before the September 11th attacks, the Commission presciently warned of a mass casualty terror attack on the United States homeland:

The combination of unconventional weapons proliferation with the persistence of international terrorism will end the relative invulnerability of the U.S. homeland to catastrophic attack. A direct attack against American citizens on American soil is likely over the next quarter century. The risk is not only death and destruction but also a demoralization that could undermine U.S. global leadership...

...The stakes are high. We of this Commission believe that many thousands of American lives, U.S. leadership among the community of nations, and the fate of U.S. national security itself are at risk unless the President and the Congress join together to implement the recommendations set forth in this report.

Sadly, as I wrote in March 2004 ("Cognitive Dissonance, Terrorism and 9/11"), the American national security establishment in general and the Bush administration in particular viewed threats to the U.S. from the prism of the Cold War and were simply incapable of processing, filtering and understanding the signals of the growing terror threat to the homeland. Perhaps no episode better summed up this cognitive dissonance than then-national security adviser Condoleezza Rice's jaw-dropping statement on May 16, 2002:

(Of course, as former counter-terrorism czar Richard Clarke testified to the 9/11 Commission, the U.S. had worried about planes-as-missiles dating back to the 1996 Atlanta Olympics. Then again, it was Rice who glibly responded to Commissioner Richard Ben-Veniste regarding the now famous August 6, 2001 presidential daily brief, "I believe the title was, 'Bin Laden Determined to Attack Inside the United States.'")
The Hart-Rudman commission and its unheeded warnings are ancient history. But while the Bush administration was gripped by what the 9/11 panel chairman Tom Keane deemed a "failure of imagination," there is cause for hope that the incoming Obama team will do better. For openers, as Marc Ambinder noted, many of the new Commissions members, including Wendy Sherman, Graham Allison and Tim Roemer, have advised Obama on national security issues. (Allison's book, Nuclear Terrorism: The Ultimate Preventable Catastrophe, was widely praised as a blueprint for countering the threat of nuclear proliferation and terrorism by Iran and other states and their potential terror clients.) As Ambinder suggests, "don't be surprised if, to Obama, the threats of failed states and WMD proliferation are indelibly linked."
None of which is to suggest that 2008 is a replay of 2001. The seeming failure of the United States under President Bush to heed Senators Hart and Rudman seven and a half years ago by no means implies the U.S. necessarily faces an imminent and devastating WMD strike as the Graham-Talent commission now worries. In the aftermath of the tragic 9/11 attacks in New York and Washington and with a seemingly more sober administration about to come to power, Americans should hope their government is better prepared.