Nobody Could Have Predicted Condi Rice Would Attack Obama over Ukraine 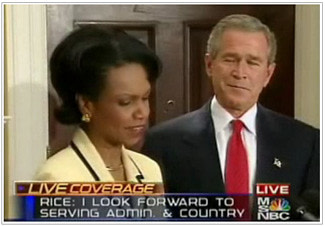 As Condoleezza Rice reminded Americans this week, nothing succeeds like failure for the members of George W. Bush's national security team. Addressing a $15 million dollar Republican fundraiser, Bush's former National Security Adviser and Secretary of State blasted the Obama administration's handling of the Ukraine crisis, declaring "When America steps back and there is a vacuum, trouble will fill that vacuum."
That's a pretty amazing statement for Condi Rice of all people to make. After all, Rice was in Georgia less than a month before its war with Russia, the August 2008 conflict a subsequent EU investigation and later Wikileaks revelations showed was started by Bush's man in Tblisi, President Mikheil Saakashvili. Her language then (Russia is "on a one-way path to self-imposed isolation and international irrelevance") sounds very familiar to American ears six years later. And it wasn't Barack Obama or John Kerry but Secretary Rice who said this in August 2008:

"This is not 1968 and the invasion of Czechoslovakia where Russia can threaten a neighbour, occupy a capital, overthrow a government and get away with it. Things have changed."

Of course, Condi Rice could have been forgiven for being more than a little embarrassed. After all, she had famously articulated her post-Iraq invasion foreign policy this way:

Her list of should-have-been career ending catastrophes hardly ends there. It was National Security Adviser Condi Rice who presided over the disastrous 9/11 attacks which "I don't think anybody could have predicted," helped dupe the American people into war in Iraq and helped erect the Bush administration's regime of detainee torture. And, as it turned out, her dismal record of failure continued uninterrupted when she moved from the White House to Foggy Bottom.
In a major address on Iraq delivered October 7, 2002, President Bush warned, "America must not ignore the threat gathering against us," adding, "Facing clear evidence of peril, we cannot wait for the final proof -- the smoking gun -- that could come in the form of a mushroom cloud." But it was Condi Rice who introduced that talking point a month earlier:

"We know that he has the infrastructure, nuclear scientists to make a nuclear weapon. And we know that when the inspectors assessed this after the Gulf War, he was far, far closer to a crude nuclear device than anybody thought, maybe six months from a crude nuclear device.
The problem here is that there will always be some uncertainty about how quickly he can acquire nuclear weapons. But we don't what the smoking gun to be a mushroom cloud."

"Hans Blix had five months to find weapons. He found nothing. We've had five weeks. Come back to me in five months. If we haven't found any, we will have a credibility problem."

Secretary of State nominee Rice had credibility problems on Iraq, all right. And not just regarding Saddam's mythical WMD.
She played a crucial part in manufacturing the Republicans' zombie myth that Iraq was linked to the September 11, 2001 Al Qaeda attacks on the United States. As late as September 2006, Rice was claiming:

"There were ties going on between Al Qaeda and Saddam Hussein's regime."

Three years later, Rice would deny she said any such thing, telling Charlie Rose "No one was arguing that Saddam Hussein somehow had something to do with 9/11." Unfortunately, just days earlier former Bush press secretary Ari Fleischer told Chris Matthews:

"After September 11th having been hit once how could we take a chance that Saddam might strike again? And that's the threat that has been removed and I think we are all safer with that threat removed."

Of course, when it came to the real threat facing the United States, President Bush and his national security adviser missed it altogether.
As George W. Bush was taking office in early 2001, the Hart-Rudman Commission on U.S. National Security issued its report declaring "The combination of unconventional weapons proliferation with the persistence of international terrorism will end the relative invulnerability of the U.S. homeland to catastrophic attack" and cautioning "many thousands of American lives" are at risk. At a transition briefing in the White House situation room during the first week of January, Clinton National Security Adviser Sandy Berger warned his successor Condoleezza Rice, "I believe that the Bush Administration will spend more time on terrorism generally, and on al-Qaeda specifically, than any other subject." And on January 25, 2001, counter-terrorism czar Richard Clarke (who helped lead the 1996 effort to protect the Atlanta Olympics from, among other things, threats from hijacked aircraft) handed the Bush national security team the Delenda plan for attacking Al Qaeda. And as we know from a trove of 120 previously secret documents concerning the September 11, 2001 attacks obtained by the National Security Archive, President Bush's team knew far more about the looming danger from Osama Bin Laden than it let on. As Salon's Jordan Michael Smith explained:

Many of the documents publicize for the first time what was first made clear in the 9/11 Commission: The White House received a truly remarkable amount of warnings that al-Qaida was trying to attack the United States. From June to September 2001, a full seven CIA Senior Intelligence Briefs detailed that attacks were imminent, an incredible amount of information from one intelligence agency. One from June called "Bin-Ladin and Associates Making Near-Term Threats" writes that "[redacted] expects Usama Bin Laden to launch multiple attacks over the coming days." The famous August brief called "Bin Ladin Determined to Strike the US" is included. "Al-Qai'da members, including some US citizens, have resided in or travelled to the US for years, and the group apparently maintains a support structure here," it says.

Nevertheless, in the aftermath of the horrific 9/11 attacks, Condi Rice played the role of a reverse Nostradmus, detailing the myriad foreign policy and security disasters she failed to predict. Confronted by 9/11 commissioner Richard Ben Veniste about the August 6, 2001 PDB (Presidential Daily Brief) which warned of "patterns of suspicious activity in this country consistent with preparations for hijackings or other types of attacks," national security adviser Rice responded:

"I believe the title was 'Bin Laden determined to strike in U.S.'"

(For his part, the vacationing President George W. Bush brushed off the CIA presenter of that infamous August 6, 2001 Presidential Daily Brief which warned of Al Qaeda's intent to attack the U.S. homeland by declaring, "All right. You've covered your ass, now.")
On March 22, 2004, Rice took to the op-ed pages of the Washington Post to argue, "No al-Qaeda threat was turned over to the new administration." And in an argument she would later make repeatedly, Rice first introduced the now ubiquitous "nobody could have predicted" defense on May 16, 2002:

As it turned out, Condoleezza Rice's failure to predict what these or any other people would do continued after she became Secretary of State. As even Liz Cheney later admitted, the success of Hamas in the 2006 Palestinian elections Bush and Rice pushed caught the administration completely off guard. Rice admitted as much at the time:

"I've asked why nobody saw it coming," Ms. Rice said, speaking of her own staff. "It does say something about us not having a good enough pulse."

That pulse wasn't any stronger when Bush and Rice encouraged Fatah to move against Hamas the next year. As Vanity Fair recalled the Bay of Pigs-like fiasco that helped produce today's Hamas stronghold in Gaza:

After failing to anticipate Hamas's victory over Fatah in the 2006 Palestinian election, the White House cooked up yet another scandalously covert and self-defeating Middle East debacle: part Iran-contra, part Bay of Pigs. With confidential documents, corroborated by outraged former and current U.S. officials, David Rose reveals how President Bush, Condoleezza Rice, and Deputy National-Security Adviser Elliott Abrams backed an armed force under Fatah strongman Muhammad Dahlan, touching off a bloody civil war in Gaza and leaving Hamas stronger than ever.

Meanwhile, Secretary Rice wasn't done selling the ongoing war in Iraq. Rice, who in her confirmation hearings spoke of being raised in Birmingham during the struggle for civil rights, explained the struggle in Iraq this way in 2006 to the largely African-American readership of Essence magazine:

Rice then offered a parallel between critics of the administration's Iraq policies and "people who thought it was a mistake to fight the Civil War (in this country) to its end and to insist that the emancipation of slaves would hold."
"I'm sure that there were people who said, "why don't we get out of this now, take a peace with the South, but leave the South with slaves."

That kind of double-talk paled in comparison to Rice's defense of so-called "enhanced interrogation techniques" used on terror detainees. Back at Stanford University in the spring of 2009, Rice was confronted students opposed to the Bush administration's regime of detainee torture. Echoing Richard Nixon's infamous declaration that "when the President does it, that means it's not illegal," Rice insisted "the president instructed us that nothing we would do would be outside of our obligations, legal obligations under the Convention Against Torture," she said, before conjuring up Tricky Dick:

(Not according to her right-hand man, Philip Zelikow. Zelikow warned his boss and the Bush team in 2006 that using the controversial interrogation techniques were "prohibited" under U.S. law -- "even if there is a compelling state interest asserted to justify them.")
And so it goes.
Nevertheless, Secretary Rice breezed through the Senate confirmation process 9 years ago. But while her 85-13 margin included "yes" votes from Senators Obama, Biden and Clinton, California Democrat Barbara Boxer lamented that "your loyalty to the mission you were given, to sell this war, overwhelmed your respect for the truth," especially when it came to warning the American people about the threat from Iraqi WMD. As CNN recalled the exchange:

Apparently, impugning other people's integrity is Condoleezza Rice's job. Anybody could have predicted that.