For years, the defining truth of health care in America has been this: health care is worst in those states where Republicans poll best. In general, the states with the greatest percentage of uninsured, the unhealthiest residents and the most dismal health care systems give the GOP its strongest support. (With the "coverage gap" in states that have rejected the Affordable Care Act's expansion of Medicaid, the blue-red chasm will only get worse.) 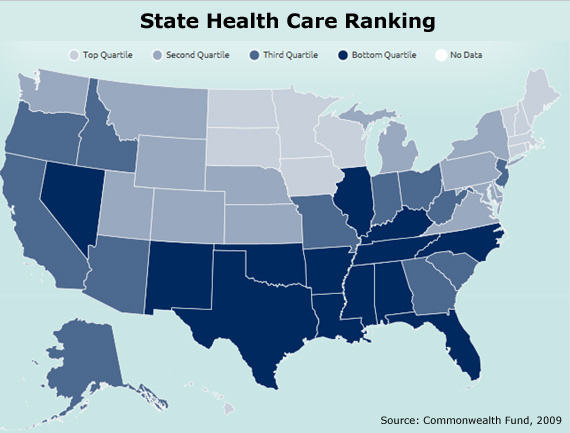 All of which is why conservatives have latched onto a single data point to discredit blue state health care in general and Obamacare in particular. Massachusetts, they point out, has the highest per capita health care costs of any of the 50 states. Citing a recent report in Modern Healthcare, an orgasmic Philip Klein joyously concluded "Massachusetts, the model for Obamacare, has highest health costs in the United States":

Massachusetts, whose health care reform program was used as a template for the Patient Protection and Affordable Care Act, had the highest per capita health spending in the U.S. in 2009. According to the commission's report, the state spent $9,278 per person on health care in 2009, which was 36 percent higher than the national average of $6,815, and 11.2 percent more than the next-highest state, New York, which spent $8,341.

While that figure on per capita health care spending in Massachusetts is true, it also happens to be meaningless when it comes to assessing the impact of Obamacare. 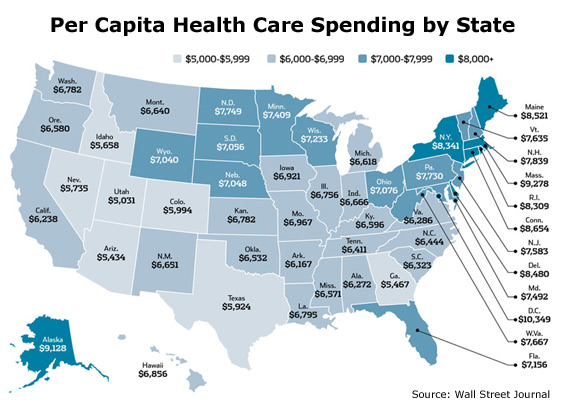 For starters, Massachusetts' health care spending didn't skyrocket after then- Governor Mitt Romney signed a nearly identical overhaul into law in 2006. As the data from the Kaiser Family Foundation show, the Bay State led all 50 states in per capita health expenditure every year since 2000. In fact, Massachusetts has topped the list each every year for two decades, except in 1991 and 1999 when Connecticut came in first.
As the Wall Street Journal explained in April, the reasons for the high costs in Massachusetts and other Northeastern states are pretty straight-forward:

But Connecticut and Maine also have significant spending, and Maine's expenditures were some of the fastest-growing in the past two decades. Experts generally attribute the region's higher spending to its higher cost of living, greater proportion of elderly residents and number of high-profile hospitals.
Expansive, sparsely populated states such as Alaska and North Dakota also have high spending. Their representatives often attribute this to care delivery being more expensive under their conditions.

Put another way, health care spending per head is higher where incomes are higher, where the cost of living is higher, where the population is older, where people are sicker and where more of the population actually has health insurance. (Those factors explain why Alaska is near the top of the list despite having 19 percent of its residents without health insurance.) Throw in being home to perhaps the greatest concentration of medical education and training in the United States and it's no surprise that Massachusetts spends a lot per head for health care.
But what did happen after Romneycare started in 2007 is that Massachusetts became the state with the lowest percentage of uninsured residents in the nation. As I noted in September 2012 during the presidential campaign:

By most measures, Governor Romney's signature 2006 health care law has been a tremendous success. Enjoying the consistent support of Bay State residents by a 2 to 1 margin, the bill Governor Mitt Romney signed into law lowered the uninsured rate from 12.5 percent to a national low of two percent. In March, a study by the National Bureau of Economic Research (NBER) showed that universal coverage in Massachusetts is indeed making people there healthier. Meanwhile, the rate of growth for business and individual insurance premiums has slowed dramatically, a trend state regulators earlier this year announced will result in only a 1.2% increase.

Of course, you don't have to take my word it. As the New York Times and AP ("In Mass., individual mandate sparks little outcry") reported last year during the 2012 presidential campaign, fears about affordability and non-participation in the state with the nation's highest insurance premiums did not come to pass. As a CBS report on Romneycare's sixth anniversary explained:

In Massachusetts, there is not just an individual mandate to buy insurance, there is also an employer mandate to provide it, and employers do for 79 percent of Massachusetts residents, up ten percent since health reform was implemented, bucking the downward national trend, whereby only 60 percent of employers nationwide provide health insurance.
The penalties for individuals not enrolling in a plan range from $19 a month to a maximum $105, depending on income. People earning less than $16,345 a year are exempt from the mandate. The fine is no more than $58 per month for those earning up to $32,676 per year. Above that, refusal to enroll leads to the $105 bill.
Every year, the number of Massachusetts residents opting out of health insurance has shrunk from 67,000 in 2007 to 44,000 in 2010.

Meanwhile in the "uninsured belt" that runs across the South, red states continue to get what they pay for--or, more accurately--don't pay for. As I explained in March 2012:

But tallying up the ranks of the uninsured understates the magnitude of the unfolding health care horror story in Red State America. Two years ago, the Commonwealth Fund released its 2009 state health care scorecard, which measured performance in providing health care access, prevention and treatment, avoidable hospital use, equity across income levels, and healthy lives for residents. Again, while nine of the top 10 performing states voted for Barack Obama in 2008, four of the bottom five (including Arkansas, Mississippi, Oklahoma and Louisiana) and 14 of the last 20 backed John McCain. (That at least is an improvement from the 2007 data, in which all 10 cellar dwellers had voted for George W. Bush three years earlier.)

Among those laggards is Texas. Spending just $5,924 per capita on health care each year, the Lone Star State comes in 46th out of 50 states and the District of Columbia. Then again, it's no surprise the Texas health care system also ranks 46th.